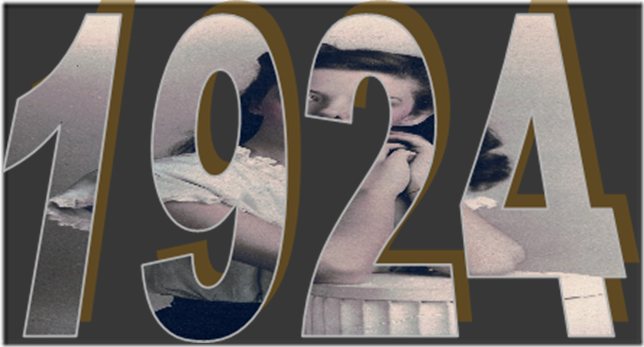 Today, October 3rd would have been my Mom’s 92nd birthday.  I thought I would take a look at her birth year and see what things were like “back then.”

My grandparents Joseph Albert Milne and Florence Bowden Milne would have been 41 and 36, respectively.  My mother was their last child of 4, and apparently, a surprise.

SOME OF THE WELL KNOWN PEOPLE BORN IN THIS YEAR
Music & Movie Favorites
Movies – Thundering Hoofs, A Sainted Devil with Rudolph Valentino, Beau Brummel and The Thief of Bagdad

Music – Breakin’ Em Down by Eubie Blake, Tea for Two by Harlan Lattimore and Lady Be Good by George Gershwin

Sources for this information was lots of Googling

Do you have a year you’d like to look more closely at?  Maybe this would be a good theme for Randy Seaver’s Genea-Musings, Saturday Night Fun?

Email ThisBlogThis!Share to TwitterShare to FacebookShare to Pinterest
Labels: #happybirthday, #on this date, #remembering, Mom