2018 YEAR END FAMILY TREE PROGRESS REPORT ~ By the numbers–How many new people? How many new events and sources? 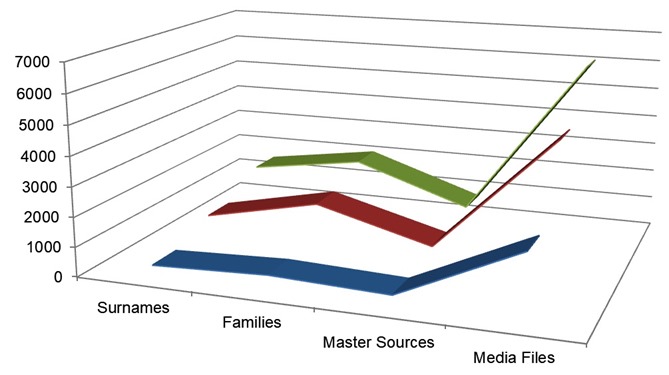 This is a topic that was first shared on Randy Seaver’s blog Genea-Musings.   It’s all about the statistics or numbers in your database.  How well did we actually do in our research of family?
2018 is quickly drawing to a close.  Each year I take a look back at my Legacy database to see how my family tree has progressed.
To get to your statistics report in Legacy go to the Help tab>About Legacy and click on General.
I’ve run this year’s report and here is how it looks. 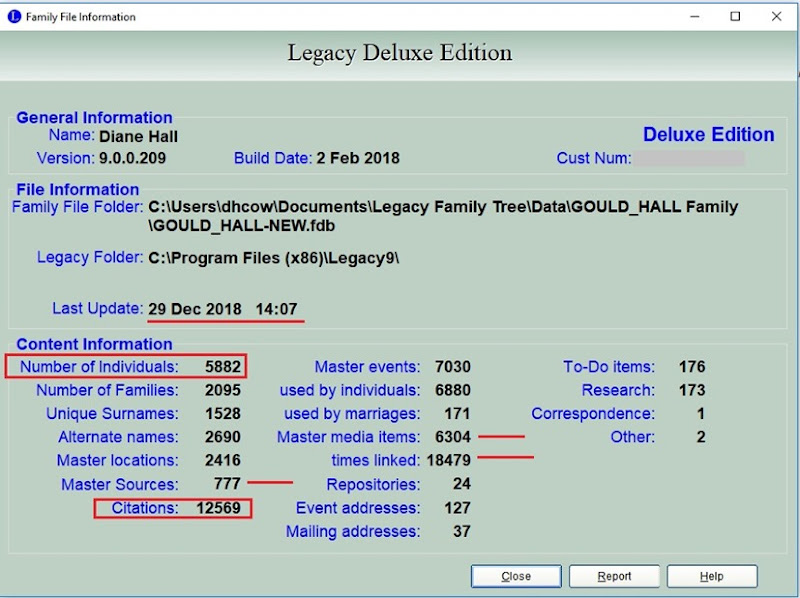 Let’s go back to the 2017 year end report and see what that looked like. 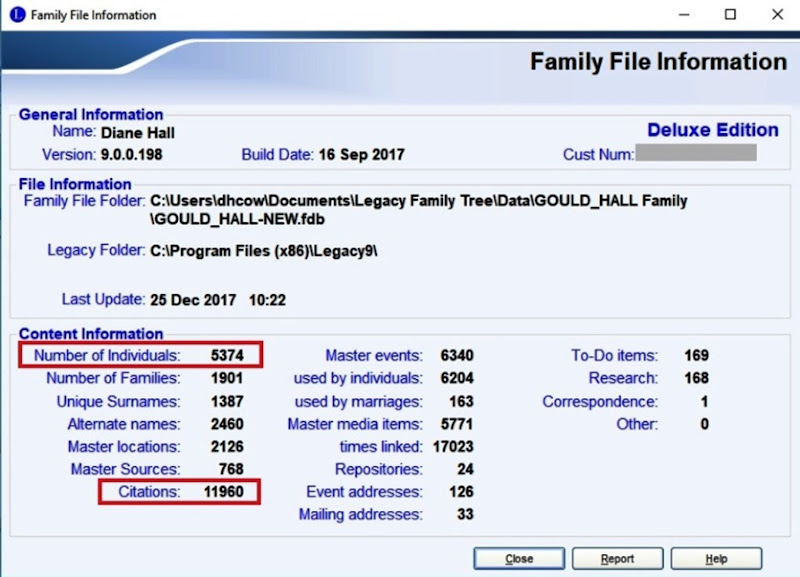 How about citations?  Have I continued to be diligent about adding sources to the items I am entering, census, vital records, newspaper articles etc.?

By dividing the citations by the number of individuals you come up with a percentage.  Last year that percentage was 222.5%.  This year for 2018 the percentage is 213.7%.  That’s a drop of 8.8%.  I believe this is the first year in 5 years that my citations have dropped.  What this means is that I’ve gotten lazy.  I add people and events and I’m not citing them like I used to.  For me it’s vitally important that what I put into my tree, be verified by sources and those sources MUST be cited. Legacy makes it so easy and I’ve been doing it for years, so I have no excuse.

Let’s take a look back 5 years and see what’s happened in my tree.
Here’s the year end report from December 2013. (Aren’t these some ugly colors I was using back than?) 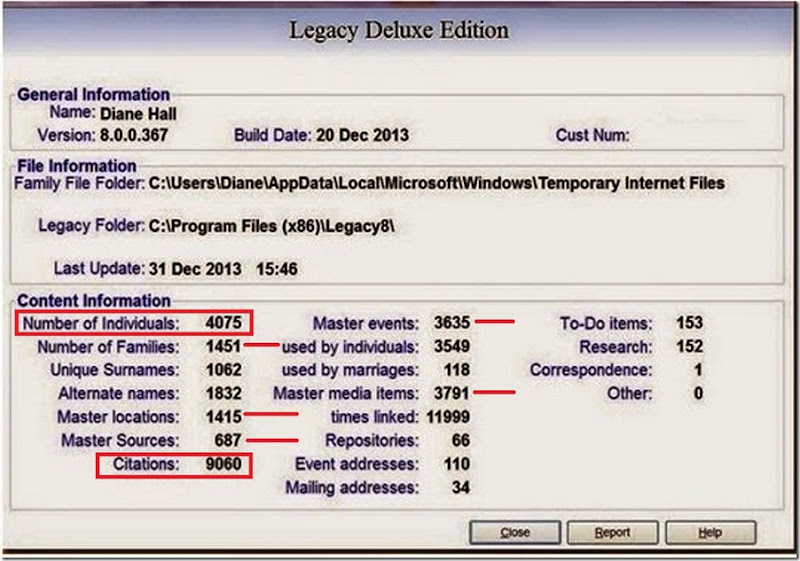 Here’s a comparison table of 5 years of work on my family tree.

In these 5 years I’ve added about 360 people per year to my tree.  That’s an average of just under 1 person per day.  This means I’m discovering new families.  How many new families?  According to the stats I am adding about 128 families per year.  The largest jump I see is the number of times I have linked media to events in my tree.  I will admit to being a media junkie.  I want the visual proof of what I record.  Whether it’s a marriage register, a page from a book, a draft card, pension card or census report.  I like to add that image to my tree.

The question for me is, what are my goals for 2019?
That sounds like enough goals to keep me out of trouble in the coming year.  LOL!

What are your goals for 2019?  I’d love to hear about them.  Perhaps you’ll mention something I’ve missed and inspire me.  Are we cousins?  Maybe we can work together on our goals?  I love collaboration.

I wish you the greatest of success in your research in the coming year.

Roy Jerome Hart is a descendant of my 3rd great grandfather, Henry Hart and his first wife, Sarah Sumner.  This makes Roy my half 2nd cousin twice removed.

Transcription of Obituary:
PERRY, Sept. 16 - Funeral services for Roy J. Hart, 63, will be held Tuesday afternoon at 3:30 o'clock from the Church of the Nazarene, Rev. John Smith, pastor, officiating.  Burial will be in Oak Plains Cemetery, Shaftsburg.
The body is at Oakes funeral home where it will remain until one hour previous to the services at the church.
Mr. Hart died suddenly about noon Sunday while attending church.  He had just taken up the collection and sat down in his pew when he dropped over dead.  Death was caused from a heart attack.  He had been ill about three months.
He was born March 14, 1883, at Plainfield, the son of Seth and Nettie Hart.  He was married twice, the first wife being Olive Hart who died September 9, 1931, at Shaftsburg.  He was married the second time October 29, 1932, to Mrs. Rose Martin at Shaftsburg.
He had been the manager of the Laingsburg pickle station for 15 years and had resided in Shaftsburg until he came to Perry 11 years ago.
Surviving are the widow; three daughters, Mrs. Lizzie Woodbury of Pontiac, Mrs. Lucille Martin of Rochester and Mrs. Lenna Nanasy of Morrice; three sons, LeRoy Hart of Williamston, Leo Hart of Lansing and Lawrence Hart of Perry; five brothers, Ned Hart, Eugene Hart, Hartley Hart, all of Laingsburg, Robert Hart of Haslett and Harry Hart of Shaftsburg; two sisters, Mrs. Lizzie Southwell of Shaftsburg and Mrs. Mable Richard of Lake City; four stepchildren; 31 grandchildren; 1 great grandchild; 13 step grandchildren and 6 step-great grandchildren.

I imagine having someone die in the middle of a church service must have been a shock to all the members.

While I’ve always been interested in my Hart line, that interest was recently peaked when I connected with a 4th cousin via DNA.  She is directly connected to Roy Jerome Hart who is her 2nd great grandfather.

Here's Roy & Olive with 5 of their children.  Photo courtesy of Peter Young. 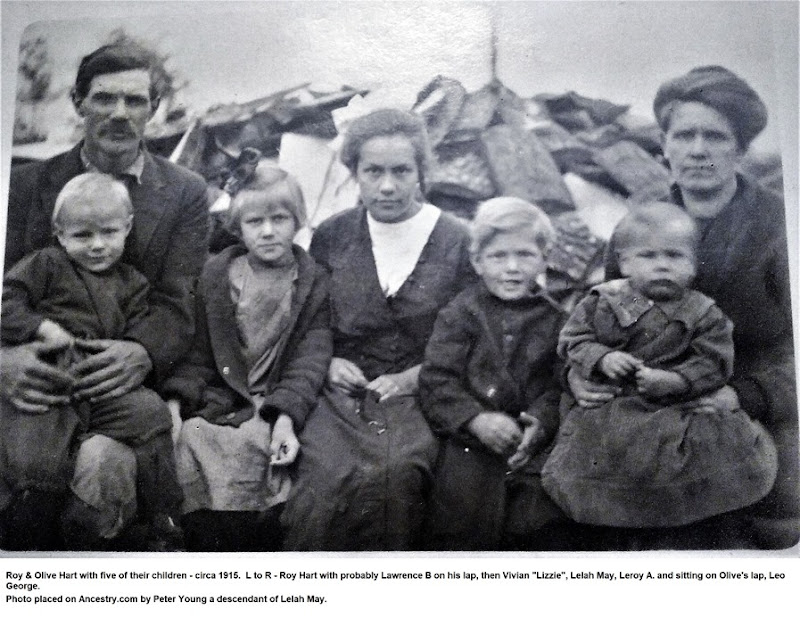 After Olive died, according to Roy’s obituary, he married again to a Mrs. Rose Martin.  Until finding this obituary I had no record of a second wife.

NOTE:  This particular obituary is full of genealogical information, from marriage and death dates and places to names of a lot of family members.  We don’t always get this lucky when it comes to obituaries.  I’d like to thank whoever wrote this one.

I have located Roy in census records with his parents, Seth Andrew Hart and Nettie Wright and with his wife Olive.  After his marriage to Olive in 1901 he worked as a Farmer, according to the 1910, 1920 and 1930 census records.  I see from the obituary that he managed a pickle station for 15 years. What in the world is a pickle station?

Since Google is our friend, let’s find out.  According to what I learned Shiawassee County, Michigan was a center for the growing and processing of cucumbers into pickles.  Who knew?  I have no evidence at this point that our Roy Jerome Hart was growing cucumbers in his farming endeavors.  However, he is listed in the Shiawassee Farm Journal (published in 1917)  on page 22.

I checked the front of the book to learn what all the abbreviations in the entries stood for and from that I can translate Roy’s entry as follows:

Hart, R. J. (Olive) 5 children, Owns 80 acres with 2 horses and 7 cattle, address of Rural Route No. 1, Shaftsburg Wdhl 48, Ind tel ( I suspect the tel stands for telephone).  I did not find a translation of Wdhl or Ind in the journal.

Update - After finishing this blog post I discovered another child born to Roy & Olive.  A little girl named Edith Pauline, born 29 Jul 1903 and died at age 4 on new year's day 1908.  Her death was a result of peritonitis from an intestinal obstruction.  How sad. I have not found her burial location.

If you are related to any of the people mentioned in this post and want to exchange information, I’d love to hear from you.  Leave me a comment or use the “contact me” tab on the blog.


ALL RIGHTS RESERVED.  NO USE WITHOUT PERMISSION
Posted by Diane Gould Hall at 12:00 AM No comments:

May all your Christmas wishes come true

May all your Christmas memories be fond and may you make more this year.