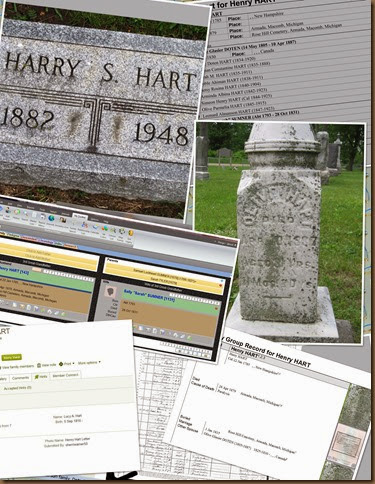 MY GOAL:  CAN I PROVE A RELATIONSHIP BETWEEN MY 2ND GREAT GRANDFATHER, HENRY HART &amp; A REPORTED FIRST WIFE?

HE IS REPORTED TO HAVE MARRIED &amp; HAD 4 CHILDREN WITH THIS WIFE, PRIOR TO MARRYING MY 2ND GREAT GRANDMOTHER.


THIS IS AN ONGOING SERIES.  PLEASE REFER TO PREVIOUS POSTS, IF NECESSARY.

I HAVE RESTATED MY GOAL ABOVE AND WILL RE-STATE THAT GOAL AT THE BEGINNING OF EACH POST FOR THIS SERIES.

WHAT RECORDS HAVE I ALREADY COLLECTED FOR BENJAMIN TYLER HART?
WHAT DO I WANT TO LOOK FOR NEXT?
I have located a death record for Benjamin T. Hart on familysearch.org.  He died 14 Jun 1897 in Clyde, St. Clair, Michigan.

Here is the document recording his death.  He is the last one on the page.
(Please click on any image to enlarge it) 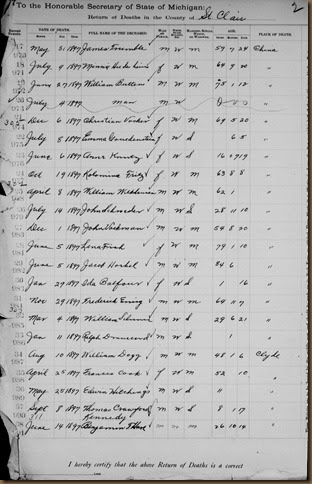 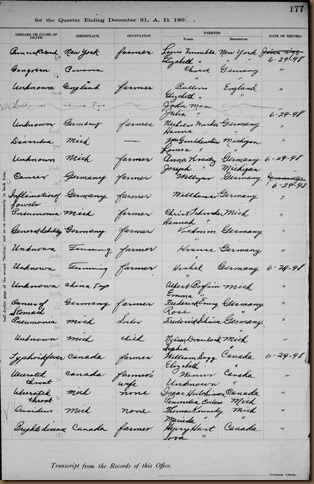 Anyone see that item in red in the list above the document?  His age is listed as 26 years.  Our Benjamin was supposedly born in 1820.  He was married in 1843.

What am I to think?  Is this the wrong person?  In my opinion, No.

It is my opinion that the number so easily mistaken as a 2 could easily be a 7.

HOWEVER, I would hope to find another piece of evidence that this is the correct Benjamin Hart.

Let’s look at the headstone for Benjamin and see what it says. 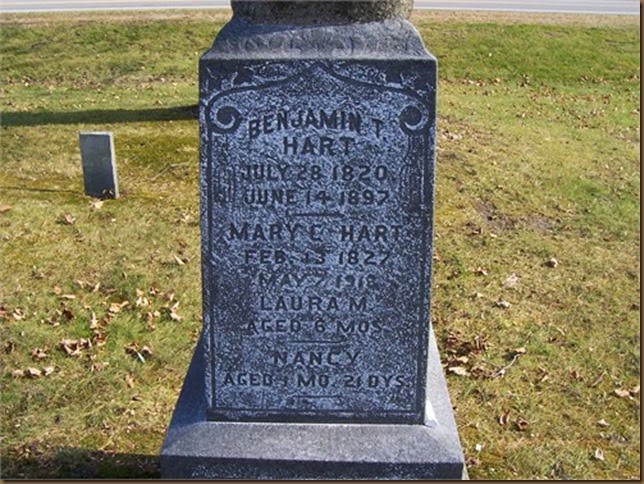 Don’t you just love it when headstones have more that just a name & year on them?

Look at this one!  For both Benjamin T. Hart & his wife Mary C. Hart, we have exact dates of birth and death.  I know the two children Laura & Nancy are their infant daughters.

This is pretty good evidence that the death record I found was the correct one.  Can headstones be wrong?  YES!  Just like any other record we find, they too can have mistakes.

How about an obituary?  Let’s go look on genealogybank.com and see if they have something.  Darn, not a thing on that site.

One more piece of evidence that Benjamin died in 1897.  His wife Mary is listed as a widow, living with her son Isaac & his family in the 1900 census.

I am satisfied that the death record is for the correct Benjamin.

Have I accomplished my mission on this date.  I would say so.

There is one more piece of evidence that lists Henry & Sara Hart as the parents of Benjamin Hart.  It’s a Michigan, Deaths & Burials Index, 1867-1995.  Again, we have a little discrepancy.  His middle initial is listed as “J.” instead of "T".   I can’t look at the original as there is only an index on Ancestry.  This could easily be a transcription error.  Given the other information on this index, I conclude that it is the correct Benjamin Hart. 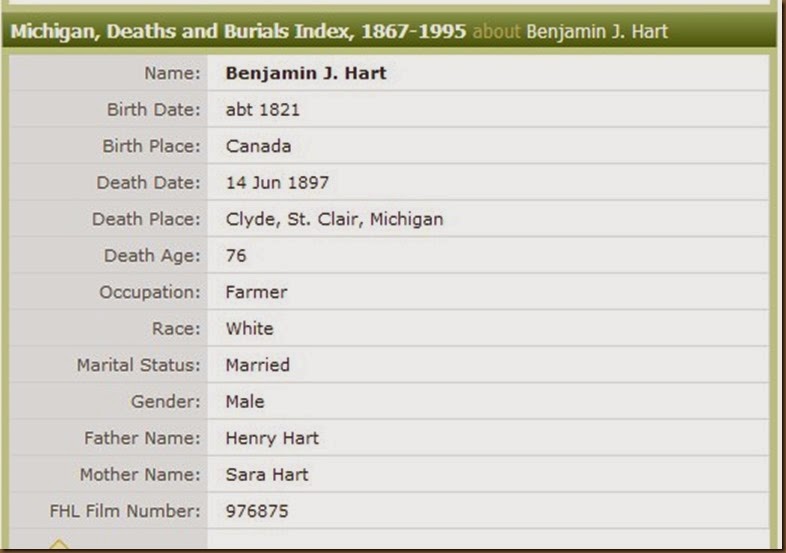 Is this definitive proof about Henry & Sara’s marriage?  I wouldn’t call it proof, but it’s a start.  At least we have their names appearing together on two different documents.  Although her maiden name is not listed.

TIP:  Sometimes we have to come to conclusions in our research based on evidence we find that isn’t the proof we’d like.  I would like to find a marriage record for Henry Hart & Sara Sumner.  I would also like to find a death record for Sara Sumner Hart.  I'm not sure if I will be able to find either, but I'll keep looking.

For now, I'll be satisfied with what I do find.

I’m going to stop for today, or I’ll have to publish this as a book and not a blog post.

OTHER POSTS THAT MAY BE OF INTEREST
Surprise! A birth record where it wasn't supposed to be
Cemetery Records - What can they tell you? How do you use them?