WHERE WERE THEY BORN? 5 generation color spreadsheet showing birthplaces


Thanks to J. Paul Hawthorne for creating this idea that went viral in the genealogy world the past two days.  While I’m a day behind others, I still wanted to share this great idea with all of you.

The idea is to create a spreadsheet chart showing birth places for our ancestors.  It’s been a lot of fun to see everyone’s colorful charts and see all the various locations.

Here they are.  Both my birthplace chart and my husband’s.

You can clearly see the Michigan theme in mine, as well as Scotland and Ireland.  Those red blanks are the brick walls. 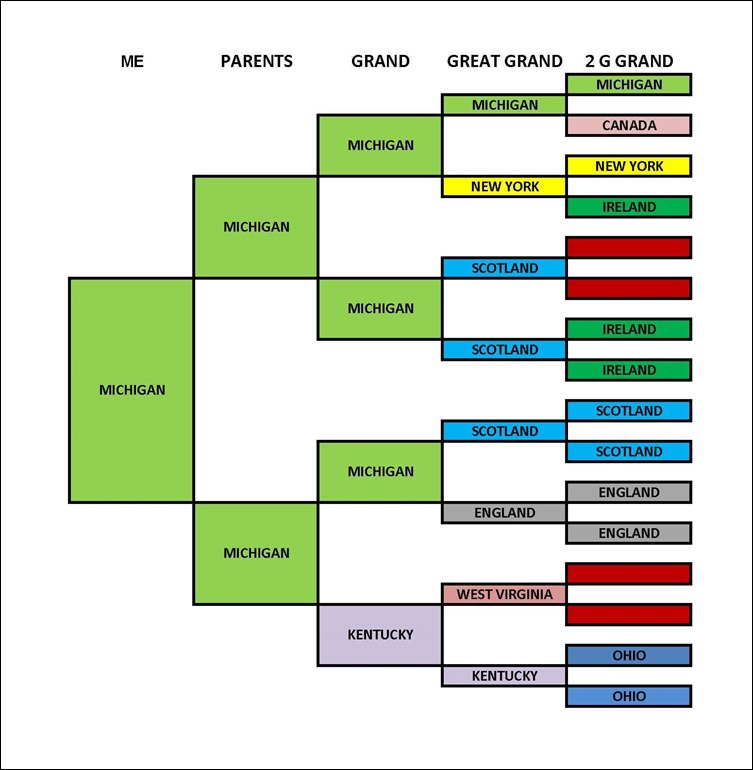 Here is my husband’s chart.  New York and Pennsylvania stand out.  But even more startling when you see it in living color is all the red on his mother’s side.  I’ve worked and worked on locating those families, but have had no luck thus far. 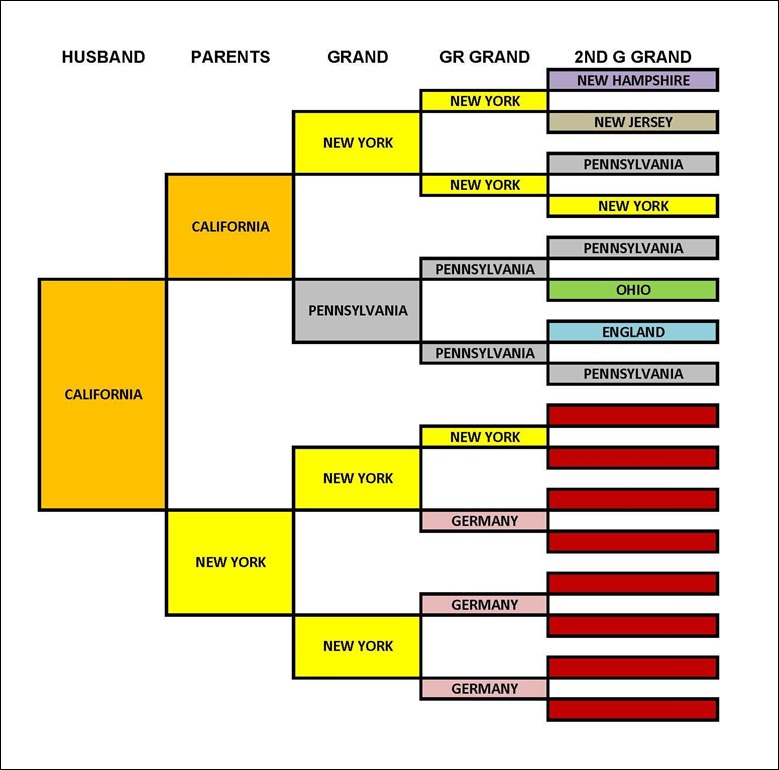 Thanks again to J. Paul Hawthorne for this wonderful exercise.

DID MY ANCESTOR DO TIME IN SING SING PRISON?


BACKGROUND: I was recently going through some of my BOGGS ancestor’s info in my Legacy database.  I have 102 individuals who were either born with the surname Boggs or married a Boggs.

One of my 2nd great grandaunts, Lucinda Estelle Boggs has always been of particular interest, as I cannot find much information about her.  What I do have comes from my grandmother’s journal of names, dates and marriages.  Please see my posts where I have transcribed all the names and dates in that journal by clicking here.

In addition to her journal my grandmother left other miscellaneous pages of notes for her genealogy research.  NOTE:  my grandmother, Florence Bowden Milne was born in 1888 and died in 1986, so all her notes are handwritten.  No online research was available to her.  I have verified and found evidence that most of her research is incredibly correct.

Below is the page about the Boggs line.  You can see I have outlined in red the portion about  Stella Boggs. 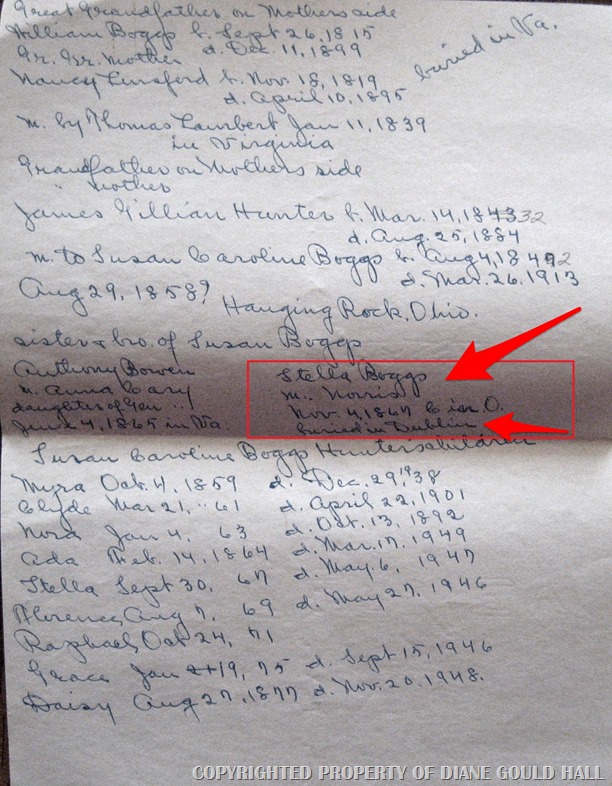 Here is the excerpt from my grandmother’s complete handwritten tree.

It’s difficult to see the lines drawn between the generations, but they are there.

Transcription of that area is:

Here is my Family View from Legacy, based on the information I have.  Note:  I have no idea where I got the “Abt 1840” birth year for Berry Norris.  This is a result of my own failure to document every entry, back when I began my research in 2003.  In fact the last note I have for Lucinda Estelle Boggs is from June 2006. So, it’s been some time since I’ve researched this family.

HERE IS WHERE IT GETS INTERESTING
I decide to do some research on the NORRIS-BOGGS family on Ancestry.  I see a couple of hints come up for Berry Norris.

There are only two hints for Berry Norris.  One is for 3 public member trees, which I look at and see that two are my trees and one is my brother’s.  I only look at the Ancestry Member Trees for hints and clues.  I never site them or copy from them to my tree without proof (valid sources) of the information.

The other hint is “New York, Sing Sing Prison Admission Registers, 1865-1939.”  Now this could be interesting!!

Here is what I found. 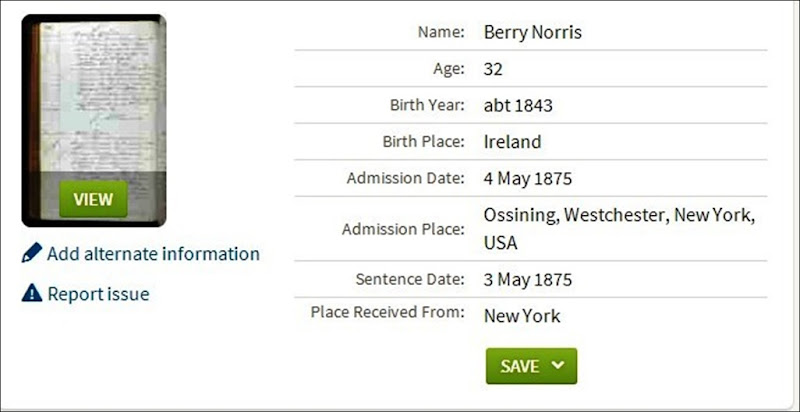 Let’s take a look at the image and see what it says. 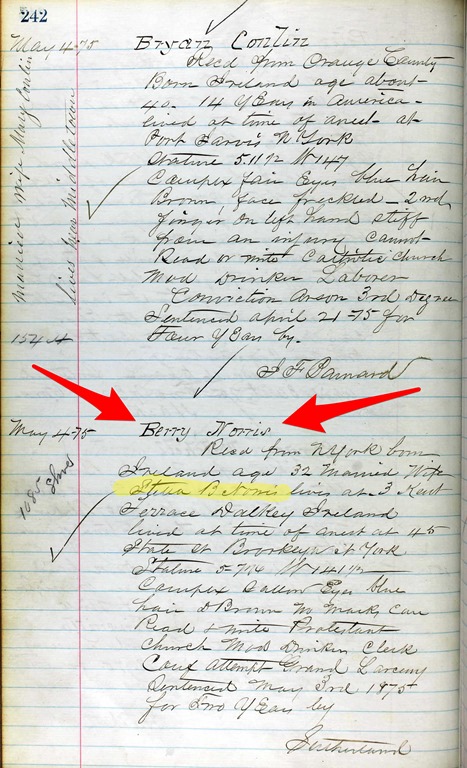 Further research today revealed a newspaper article which I located on the Fulton Postcard website.  This is the first place I look when I’m trying to find newspaper articles for New York.
In the New York Herald 3 May 1875, page 9, I located an article about the Court of General Sessions held by Judge Sutherland. 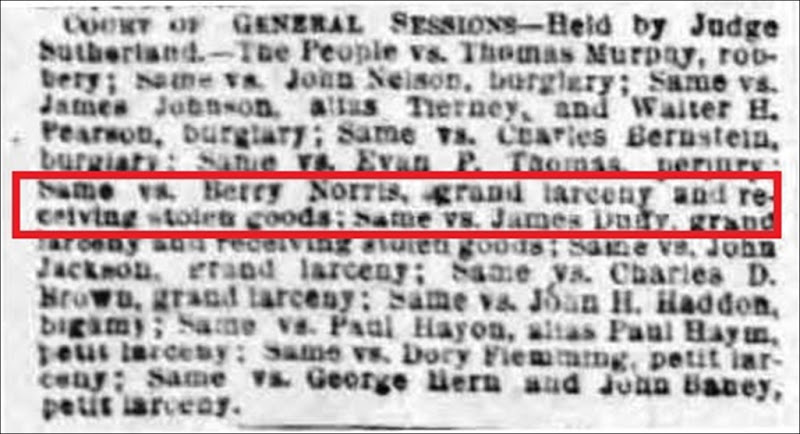 I still have a lot of research to conduct for Barry & his wife and family.  Here is the evidence that, so far, leads me to conclude this may be my ancestor.
I’ve inquired, as I so often do, on the New York Genealogy Facebook group to which I belong.  Other members of these type of groups often have historical information, links to places to find information, or live in the area and can offer assistance.  When I posted my inquiry, I got several responses.

Is this my Berry Norris?
What conclusion would you come to?

I know my research is far from finished.  I am not completely comfortable, just yet, in saying this is my ancestor.

Do you have any hints or insites to offer?  If so, please post them in comments.  I’d love to hear from you. 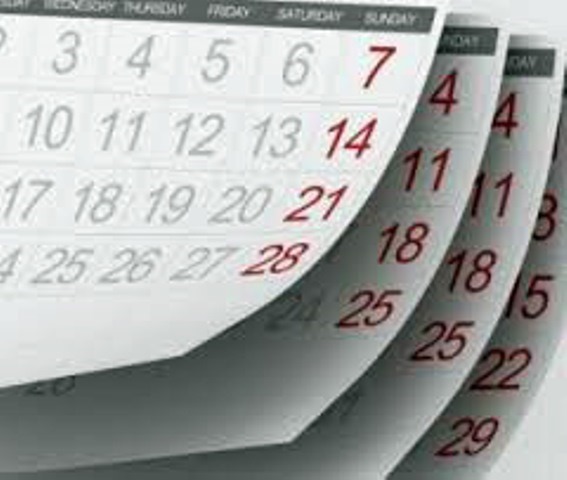 Sometimes it’s fun to pick a random day and write about it.  This time I’ve picked March 4th.

Let’s look at some family facts for that date:

WHO WAS BORN ON MARCH 4th?

WHO WAS MARRIED ON MARCH 4th?

STOVER, Joel and BOLIN, Martha – married in in 1841 in Lawrence Co., Ohio (Joel was later married to my 3rd great grandmother, Emily GILLEN)

WHO DIED ON MARCH 4th?

TRAYLOR, Robert Roland – died in 2012 in Huntington, Cabell, West Virginia (he was the husband of my 3rd cousin twice removed)

I did a search on the internet to find out what historical events took place on this day and found there were quite a lot, many of significant importance.

Here are some highlights from the list, that stood out to me:

1681 - England's King Charles II granted a charter to William Penn for an area that later became the state of Pennsylvania.
1766 - The British Parliament repealed the Stamp Act, which had caused bitter and violent opposition in the U.S. colonies.
1789 - The first Congress of the United States met in New York and declared that the U.S. Constitution was in effect.
1826 - The first railroad in the U.S. was chartered. It was the Granite Railway in Quincy, MA
1908 - The New York board of education banned the act of whipping students in school.
1917 - Jeanette Rankin of Montana took her seat as the first woman elected to the House of Representatives.
1998 - The U.S. Supreme Court said that federal law banned on-the-job sexual harassment even when both parties are the same sex.

Was there anything special that happened in your family on March 4th?  If so, please tell me about it.

AN EXACT DEATH DATE IN A CITY DIRECTORY LISTING