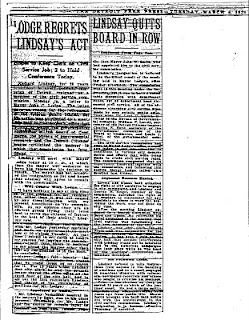 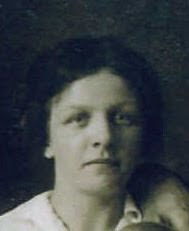 That's a picture of Bessie Lindsay and an article about Richard "Dick" Lindsay.

Gosh, it's been several days since I've posted. The reason is because I've been so darn busy gathering information from my newly found 3rd cousin. Well, maybe also because the internet has been up and down due to the incredible storm that swept thru here for several days. But...........where was I? Oh yeah, the Lindsay's. This new 3rd cousin, I'll call her May for privacy purposes, has provided pictures, vital records and newspaper articles galore. In exchanging photos I was able to identify the two unknowns sitting at a table with our Great GrandUncle Dick Lindsay, as my grandfather and grandmother. How cool is that? And, when she sent me all those newspaper articles about Great Granduncle Dick Lindsay (he was prominent in Detroit politics for many years) there just happened to be an obituary for his brother, William W. Lindsay. Well, William W. Lindsay is my Great Grandfather and I had not located his obituary. It's been just great connecting with May because she is as passionate about genealogy as I am and she also happens to be very nice and fun to talk to.
That's one of the unexpected joys I've found in my 5+ year journey in locating ancestors and descendants. I have connected with many cousins on all sides of the family and every one of them is a treasure. Some I've become quite close to.
So then today I was in here working and began digging around my information on Bessie Lindsay. She was married twice. The first time was not a happy marriage and according to her granddaughters she didn't talk much about it. I've been trying to locate a marriage record to that first husband and guess what? I FOUND IT! Where? In the Ontario Marriage Records on Ancestry.com. This is the 3rd or 4th time I have found a marriage record in the Ontario records. Seems it was pretty easy to drive over the bridge from Detroit to Windsor and get hitched. Why go out of country? In one case it seemed that there was an "early" pregnancy. This find today is also a bit suspicious as far as dates and could be for the same reason. In finding this record I've gotten the names of the first husband's parents, and the religion as stated by the bride and groom. I am sure this is the right couple because the parents names for the bride match what I have and one of the witnesses is the bride's sister - also a match for what I have.
I've gone on too long already. Never quit looking. While you may not locate something today you never know what you'll find next week, next month or next year. Keep good records on what and where you search, but never hesitate to go back to a place you searched before and search again. New records are being added all the time.

I better get back to "work."
Smiles,
Michigan Girl
Posted by Diane Gould Hall at 2:59 PM No comments:

New information on the Murphy's

Yesterday and today I've recevied some new information on the Murphy's in our line. Francis "Frank" Murphy married Agnes Lucy Thorp who is my Great GrandAunt. I always enjoy making new contacts because more often than not it leads to new information, new cousins to make friends with and best of all, sometimes you get those elusive photos of past family that you thought you'd never see.
It's supposed to rain here for the next couple of days which should make it great weather for staying indoors and working on genealogy. I'll let you know what I find.

Over and out,
Michigan Girl
Posted by Diane Gould Hall at 4:19 PM No comments:

Connection with our Lindsay side! 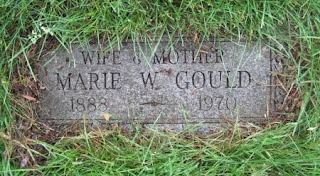 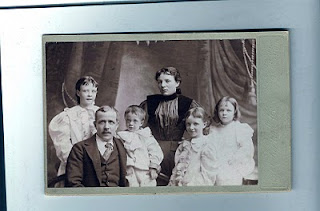 Boy, is this ever exciting. I was contacted a few days ago by someone who found one of the memorials I had posted on Find A Grave. She said she was a G G Granddaughter of this particular Lindsay. Wait a minute..............I'm also a G G Granddaughter of the same man. Holy cow! That's my Grandmother's family and I don't have any really good contacts on that line.
I wrote back to her immediately. Since then we have talked (she still lives in Michigan) and we have exchanged family groups sheets and photos. What a find. Can't wait to meet her when I go back to Michigan for a visit.
The more you put your information out there, the more likely you are to connect with others doing research on the same lines. Find A Grave has been an excellent site for finding information about deceased family (you'd be surprised where they show up). You'll be saying to yourself, who knew they moved to that state and then were buried there?
That's all I have time for today - back soon,
Michigan Girl
Posted by Diane Gould Hall at 9:46 AM No comments:

A Day at the San Diego Genealogy Society

Today was my first day volunteering to help out at the San Diego Genealogical Society. I joined this organization about a year ago, with the intent of becoming involved once I retired. Well......since I became suddenly "retired" last April I have taken a more active roll and have been attending meetings and seminars. The two seminars have been informative and I recommend classes & seminars to anyone who is interested in learning more effective way to research your family.
But, I digress. I arrived at 10 a.m. and met our society President, who had asked for volunteers. I was the only one there so I'm not sure if others volunteered or were just coming on other days? The entire society runs on volunteer work and there are many things that need to be done all the time.
I was put to work immediately in a very familiar area - liability insurance. Getting a certificate corrected to be exact. Right up my alley since that's what I did at the City of Poway for many years. Then it was on to other small, but necessary tasks. We already have plans for what I/we will do next week and I brought home a couple of things I can complete here.
I think I will enjoy this volunteer thing. After 41 years of working there's got to be something useful to pass along.
No family research got done today, but tomorrow is another day.

Til then,
Michigan Girl
Posted by Diane Gould Hall at 5:58 PM No comments:

I have just created this blog as a way to try and connect with more family members. I have been researching my family, including my husband's family, for over 5 years. I've never had a blog before so this will be a learning experience.

Here are some of the surnames that I am researching. This is not a complete list, but includes some of the primary names: Boggs, Bowen, Bowden, Bright, Fink, Frampton, Gillen, Goodbody, Gould, Hall, Hart, Hunter, Lindsay, Milne & Thorp

Stay tuned and let's see how this blog thing works.