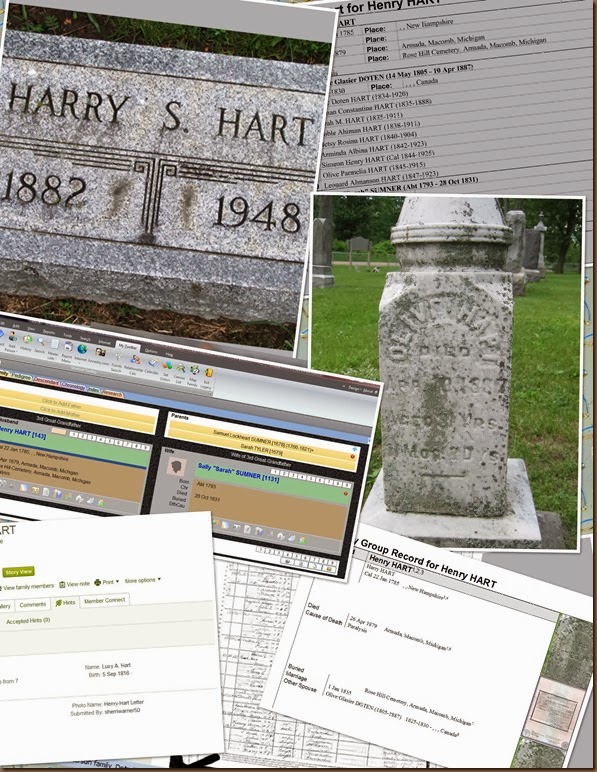 THIS IS AN ONGOING SERIES.  PLEASE REFER TO PREVIOUS POSTS, IF NECESSARY.
Here is a link to the first post: HOW I FOLLOW A TRAIL OF RECORDS & ANALYZE WHAT I FIND - HENRY HART FAMILY - PART 1

I HAVE RESTATED MY GOAL ABOVE AND WILL RE-STATE THAT GOAL AT THE BEGINNING OF EACH POST FOR THIS SERIES.

According to the information from cousin Judy, Hiram Harper Hart was born on 11 Sep 1818. No place of birth is listed nor is there a death date or place. 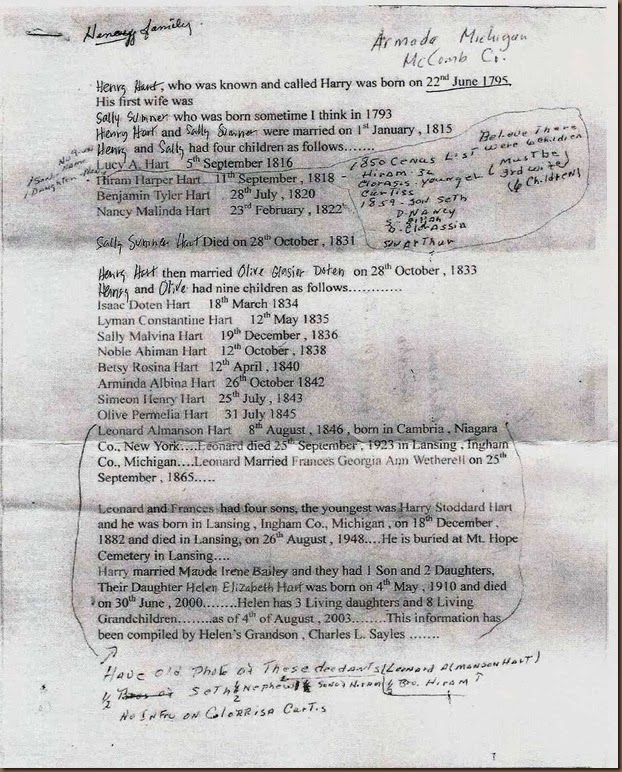 There is some handwritten information on the sheet from cousin Judy (see above photo of same) that seems to contain specific information related to Hiram. I can read most of it, but what does it mean?

Here is what I think it says, I am trying to interpret the printing to the best of my ability.

The first place I will look will be on the census reports.

NOTE:  Before 1850, only the heads of household were listed on the U.S. population census reports.  This means that we can look at the census records from 1790-1840 and try to ascertain from the ages of those enumerated, who they might be.  However, since this family was living in Canada prior to about 1838, as far as I can tell, this makes finding them a little more challenging.  Here is the chronology report with the information I currently have on Henry HART & his first wife, Sarah SUMNER: 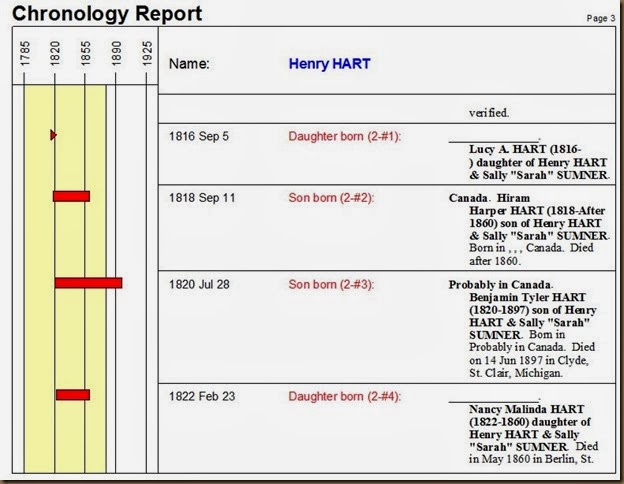 Your looking at this for the first time and so am I.  What does that “verified” word at the top mean?  I haven’t verified any of this information yet.  I am using Legacy version 8, which just came out last week.  Is this an anomaly in the report?  For now we will ignore that word.

What I have found online on Ancestry.com as far as early census records, is NOTHING.

There is a family tree on Ancestry that states that Henry was living in Cambria, Niagara Co., New York in 1840.  Would Hiram have been living with him then?  How about the other children?  I cannot locate that census record.

Let’s move on then.  Our focus is Hiram Harper HART.  It is very easy to get sidetracked when we are researching.  I can tell you that I am a HUGE offender.  FOCUS, FOCUS, FOCUS!  Those are words I repeat to myself often.

I’m going to go to familysearch.org and put in Hiram Harper Hart, with a wife named Clara (instead of Clarissa, I will enter Clara or even Clar* as it gives me a broader search).  Parents names Henry & Sally Sarah.

NOTE:  I tend to put in minimal amounts of information to broaden the net of my search.  If you enter too much you will restrain the search and I’d rather scroll through some data and pick what is relevant, than have too little.

Here is what I entered for my search:

Here are some of the results of this search: 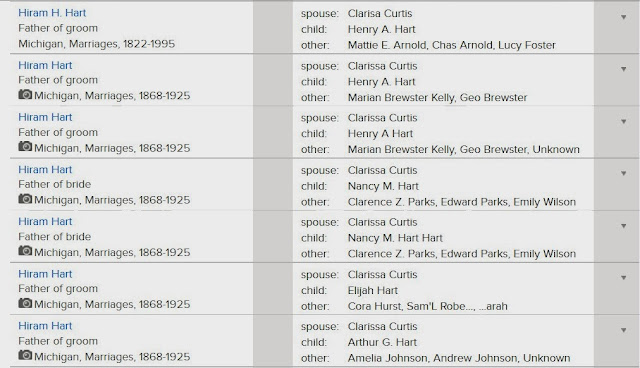 As you can see we have plenty of results.  And what excites me is that the names are a match to what is on that family list from cousin Judy (see above).

Now to examine each and every one of these records.  Since several of them have images (as indicated by the camera next to the record source) we will be able to actually look at the record, rather than just an index/transcription of the record.  However, any record is better than no record.


NOTE: It is extremely easy to get sidetracked when doing any research.  I am a perfect example of that.  I had to stop writing the draft of this post due to other priorities (you know…regular life things, especially during the holidays).
Before being able to examine the records I have posted above about Hiram Harper Hart, I found one of those “oh so tempting” shaky leaves on my Ancestry tree for Clarissa Curtis, Hiram’s wife.  I took the bait and clicked on the hints and have now gone down the road with Hiram’s wife, Clarissa.  This isn’t a bad thing to do because, after all, it’s still the same family and you don’t know what records you will find.

Here is what happened.

I followed one lead, which led to another and don’t you know I have FINALLY located her death certificate!  That’s a big find!!!  Up until now I had not located her death date or record.  WHY?  Because I would have been searching under the surname Hart.

She must have remarried to someone named PARKS.  She was living with her son Arthur in the 1900 census listed as Clarise Parks, widowed mother of the head of household, her son, Arthur Hart.  Does this help me with Hiram.  YES.  Because if Clarissa remarried and I can locate the marriage record, then I may be able to determine if Hiram died or they divorced.  At least I will have a time frame.

The steps I followed to locate her death record were as follows: 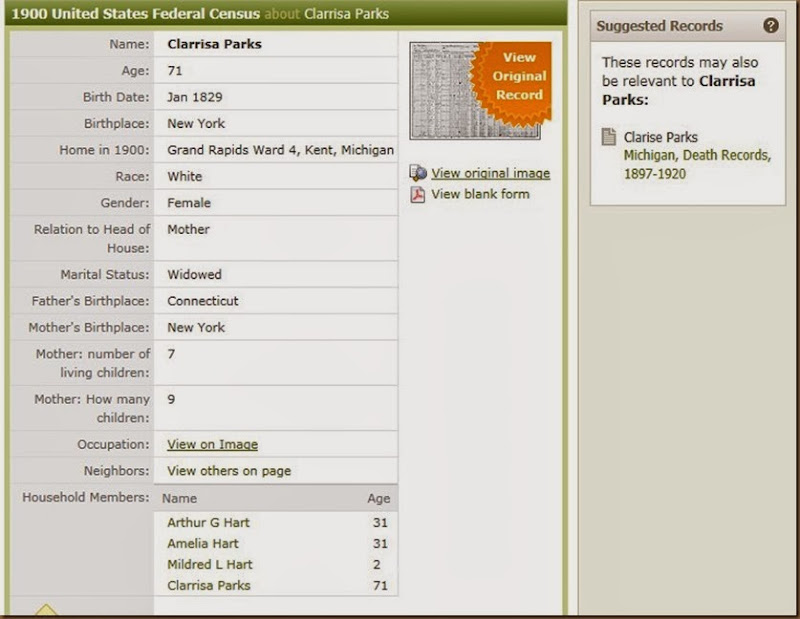 Notice it states she is widowed.  Also over on the right hand side you will “other records that may be relevant to Clarrisa Parks.”  There is a listing for a Michigan death record.

I clicked on the link for the Michigan death record and found this:

You can see that it gives the name of her father, Asa Curtis.  Based on the information from cousin Judy, I believe her maiden name to be Curtis.  And from a couple of Ancestry trees I have found her father listed as Asa Curtis.  Along with that is a year of birth 1829, which is in keeping with other records for her.

Notice over on the right hand side of this record there is listed an 1891 Canadian census.

Let’s see what that contains. 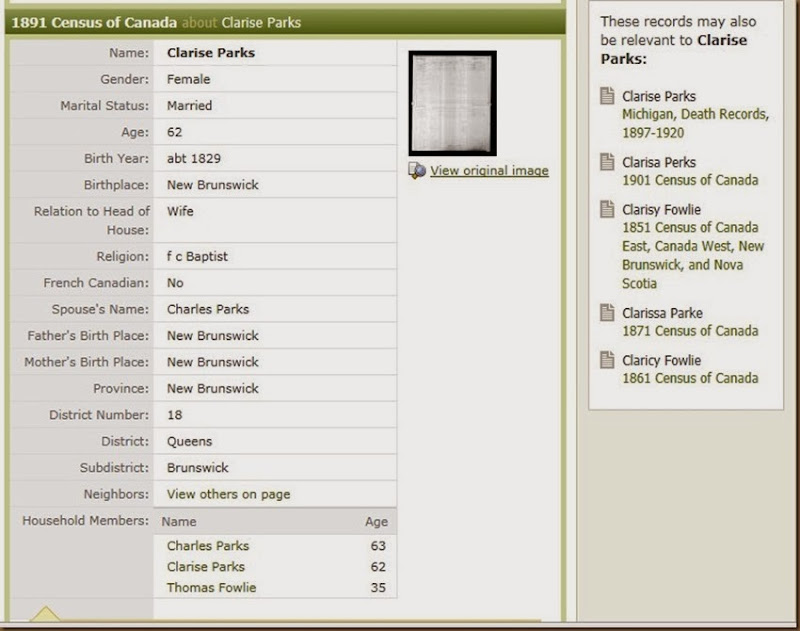 I reviewed this record and some of the other records listed on the right side of the page above. In evaluating those records I have concluded that there may be two Clarissa Parks.
I won’t go into detail here as this post is already too long.

However, let me share the marriage record I did find for Clarissa Curtis Hart to Edward Parks. 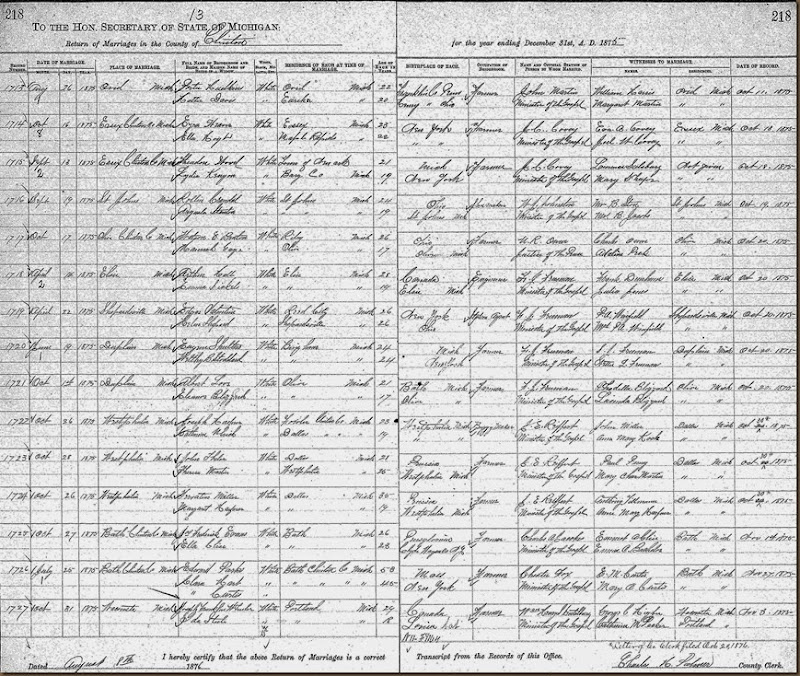 The entry for Clarissa Curtis Hart & Edward Parks is the second one from the bottom and here is a close up.  (Remember you can click on any of these image to make them larger)

As you can see this marriage record not only lists Clarissa’s last name as Hart at the time of the marriage, but it also gives her maiden name as Curtis.  Her place of birth is New York, which matches other records.  As far as her age, it’s within a year or two of other records.

TIP: Always pay attention to the ages & year of birth, but be sure you don’t disregard a record because those figures don’t match exactly.  People didn’t always know their exact dates of birth, like we do now.  And, remember, those ladies and even the men, weren’t always truthful about their ages.

Now I am convinced that the Clarissa Parks listed in the Michigan Death record is our Clarissa.  I know that there are online images of Michigan Death Certificates from 1897-1920 at a site called seekingmichigan.org.  I have used this site MANY times.  I went to that site and that's where I located Clarissa's death certificate. 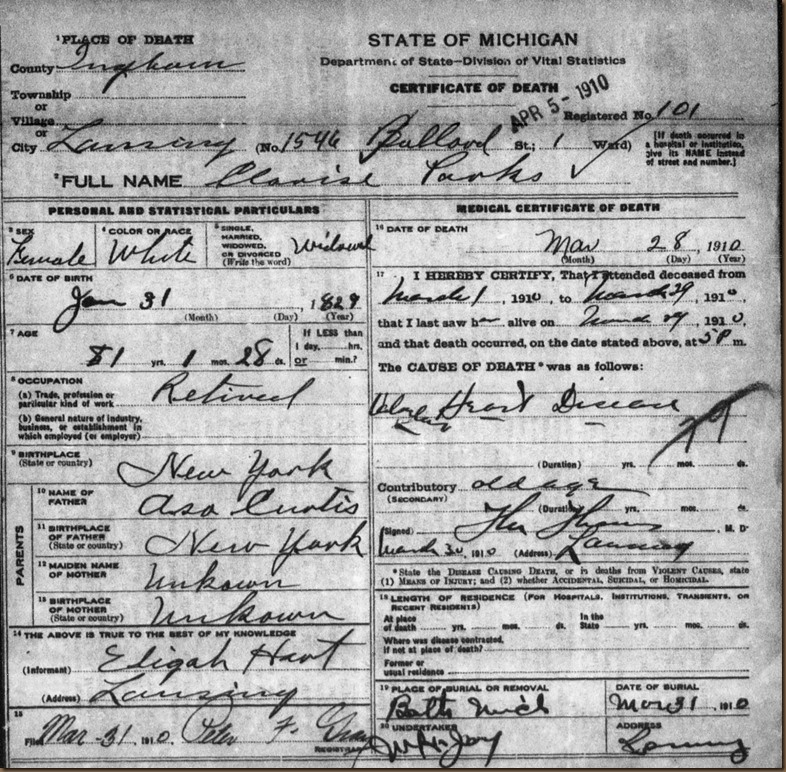 You can see that her year & place of birth match other records we have for her.  That her father’s name is given as Asa Curtis and that the informant is her son, Elijah.  I am further convinced that this is the correct Clarissa Curtis, wife of Hiram Harper Hart.

I am going to close this post for now as it’s already too long.  This is a good research day as I have discovered that Hiram Harper Hart’s wife, Clarissa, married a second time and I’ve found her death certificate.

Next time, we will continue our search and see what we find.

REMEMBER:  When we have a plan for what we “think” we want to do, sometimes we need to be ready to go in another direction, at least temporarily.

We are still trying to find proof of the marriage of Henry Hart to his “said to be” first wife, Sally Sumner.  It just may take us a while to get there. But, aren't we having fun in the meantime.  I know I am :)

I will continue with this search and share it with you. Stay tuned.