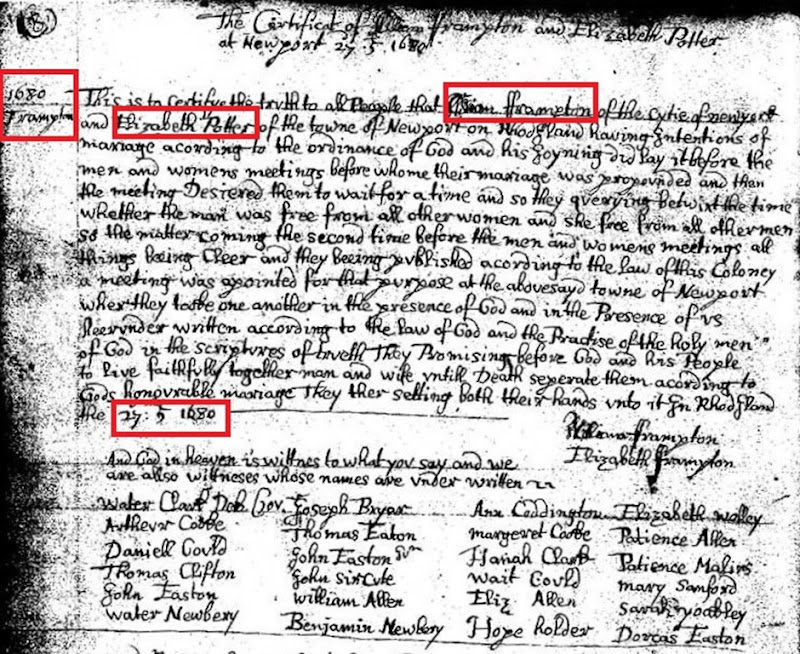 This is an exciting find for me.  Usually it’s my husband’s family for which I locate the very old records.

William Frampton was a Quaker.  The Quakers kept excellent records of church activities, including births, marriages, deaths, meetings, who joined, who moved etc.

It’s not an easy document to read, but here is my attempt at a transcription:

“This is to certifye the truth to all people that William Frampton of the cytie of ______ and Elizabeth Potter of the towne of Newport on Rhod Iland having intentions of marriage according to the ordinance of God and his goyning did lay it before the men and womens meeting before whome their marriage was provinded and then the meeting desiered them to wait for a time and so they querying betwixt the time so the matter coming the second time before the men and womens meetings all things being cleer and they being published acording to the law of this coloney a meeting was ajointed for the purpose at the above sayd towne of Newport wher they tooke one another in the presence of God and in the presence of us heerunder written according to the law of God and the Pradise of the holy men of God in the scriptures of trueth they promising before God and his People to live faithfully together man and wife untill death seperate them according to Gods honorable marriage they then setting both their hands unto it in Rhod Iland the 27 5 1680.”

I’ve discovered quite a bit more about this William Frampton and his dealings and association with William Penn.  Stay tuned for more on this story.