FRIDAY FINDS ~ Henry A. Hart Killed By A Train–His story

You know how it goes.  You begin looking at various websites and run across something that grabs your interest.  In this case it was a newspaper article  located on the website GenealogyBank with the title Henry A. Hart Is Killed by Train.

Henry was 64 years old and was married at the time, to Marian Brewster Hart.

Of course I had to learn more about Henry.

Henry A. Hart is my half 1st cousin 3 times removed.  He was the son of Hiram Harper Hart and Clarissa Curtis.  Henry A. Hart was born (according to his death certificate) on 5 Oct 1854 in Michigan.  He was the oldest of 5 known children of Hiram and Clarissa.  I expect he was named after his grandfather, Henry Hart (ca 1785-1879).

This has been a tough family to trace and much of the information I began with came from an unverified cousin, named Judy.  While this information was very helpful and gave me a great start, there were no sources attached.  I’ve been hunting for sources every since.

Henry’s story spoke to me.  As I found out more about him, I discovered that he jumped from job to job.  All of them blue collar.  He never moved away from Grand Rapids, Michigan. At least not that I could find.  I didn’t locate any children born to Henry & either of his wives. He did have family in the area though. 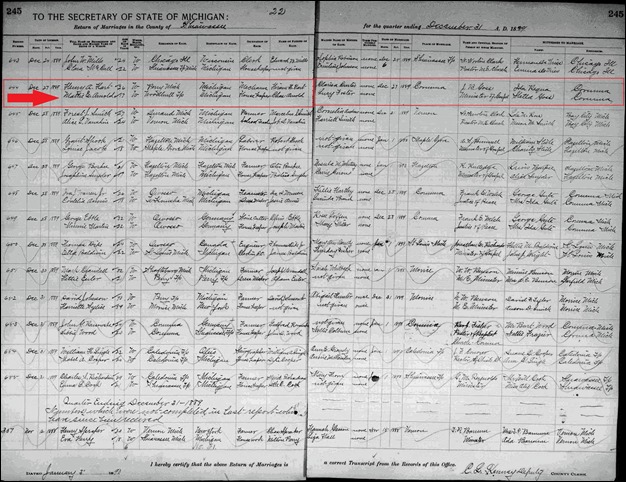 I could not locate Henry & Mattie either together or by themselves on the 1900 census.  However, I did locate their divorce record from 8 Jul 1902.  He filed for divorce from Mattie for the reason of “desertion” and it was granted.  I wonder what happened with this couple?  I have not located any further records of Mattie.

In 1903 I located Henry in the Grand Rapids city directory.  He is working as an Elevator Operator. 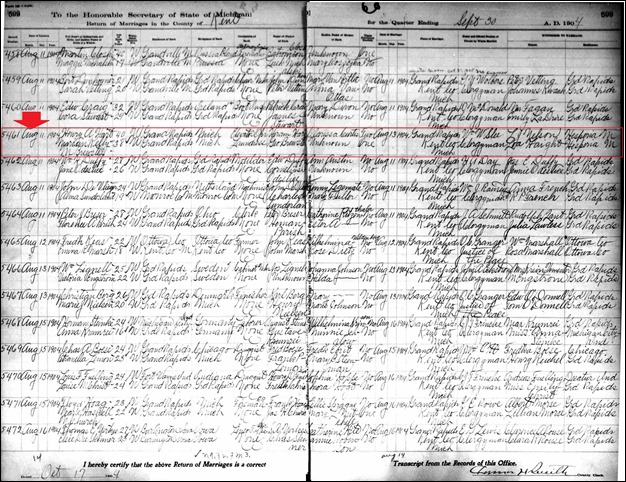 The following year, 1905, he is still an Elevator Operator.

Then in 1907 I find him working as a Sashman for P M R R (a railroad company).  I conducted a search for the definition of this occupation for the railroad and didn’t find it listed.  For a list of railroad occupation you can click here.

What comes to mind as you read all these different jobs from year to year?  I wonder…..
So many unanswered questions.

The next thing we know, Henry was walking home on the railroad tracks and gets hit and killed by a train.  Why didn’t he hear or see the train?

I had wondered what P M RR stood for from the 1907 city directory listing for Henry.  This death notice gives me the answer, Pere Marquette Railroad. 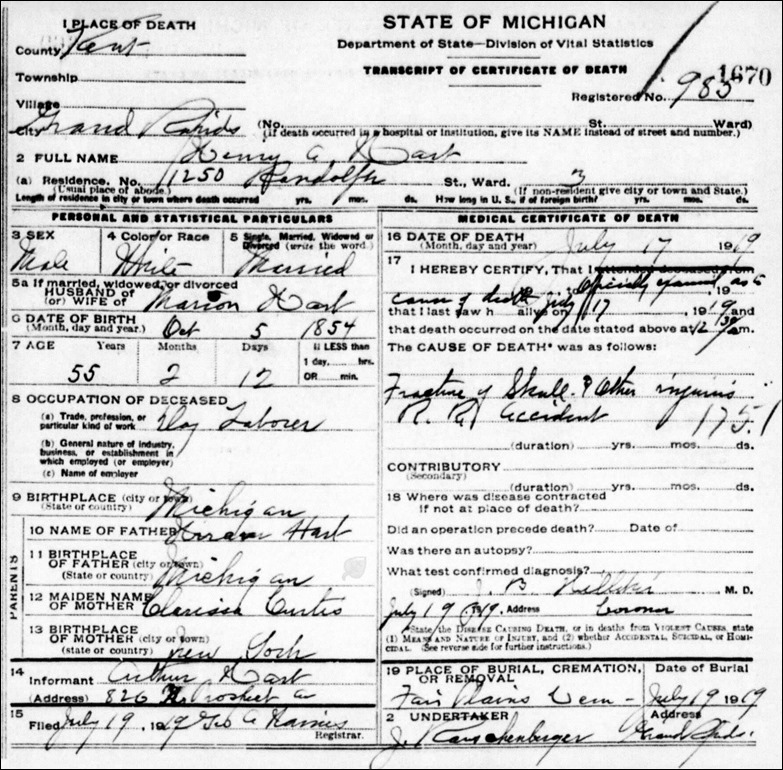 One of the first things I look for on a death certificate, is the informant.  Knowing that, can help us to determine how accurate the information might be. In this case Henry’s brother, Arthur Hart was the informant.

Henry’s wife, Marian, died just four years later on 2 Aug 1923 in Grand Rapids, Michigan.  There is no image available for her death certificate, although it should be available on both Family Search and Seeking Michigan.  I have also not been able to locate any obituary for her.

Source for the various years and occupations is the Ancestry.com U.S. City Directories, 1822-1995.  Those city directories can reveal a lot of information about your ancestor and family members in a certain time and place.

Please take a look at the two blog posts I’ve written about using City Directories in your research.

I wonder if one day I’ll find a family member who has a picture of Henry A. Hart?

Most of our ancestors didn’t live exciting or famous lives, but just tried to make it from day to day.  Much like all of us.