FRIDAY FINDS ~ Have I actually located the marriage record for my paternal great grandparents, William V. Gould & May E. Thorp? What do you think?

We all have them.  Those records that we “KNOW” should be easily located, but they elude us still.  We check again and again in all the places we think the record could or should be.  To no avail.

But, back to their marriage record.  May/Mary Eve Thorp was born in Oswego, New York 4 Apr 1862.  Her family moved to Detroit, Michigan when she was 2-3 years old.  William Val Gould was born 31 Aug 1859 in Armada, Michigan, (just north of Detroit) where he lived til his early teens.  His family then moved to Detroit.

By the year 1881 May was 19 years old and William was 22 years old.  Both sets of their parents were living in Detroit at that time, as were all of May’s siblings.  William had no living siblings.
Where would you look for a marriage record?  Michigan, right?  Or, from previous experience with my family, perhaps just across the river in Ontario, Canada.  Maybe even in northern Ohio?
Having done sweeping searches on many occasions I had come to the conclusion that I might never locate a record for this marriage.
However, we are genealogists and one thing we don't do is give up.

Fast forward to earlier this week.  I’m researching another ancestor and in the process, re reading my research notes.  Included in those notes was a copy of an email request I had sent to someone asking if they could help with 2 records I was looking for.  I date all of my research notes and this was from March 2017.  The second record was one for a marriage record in ILLINOIS that listed a May E. Thorp, age 19 marrying on 12 Oct 1881.  The page was said to be damaged and no groom’s name was listed.  There is a microfilm number and an image number listed.

WHY IN THE WORLD DID I NOT LOOK FOR THAT FILM ON FAMILY SEARCH AT THAT TIME?  I have no good answer to that question, but I’ve had many slap your forehead moments.  This was definitely one of them.

I went right over to Family Search, to the catalog and entered that microfilm number.  Once I got to the film I entered 787 in the space for image/page number and up came an image.

I scrolled through all 800+ images and you know what?  There was only ONE that was torn.  Of course it was the image I was interested in.

Looking at this screen shot of some of the images, which one do you think is the one I'm interested in?
Yup, the torn one in row 3.

Here it is in original form.  Not a pretty image, that’s for sure.  But, it is readable when I zoom in…..at least most of the names are.  You just hope you don’t have a name in that lower left corner, right?

That wasn’t how my luck was going to go today.  I downloaded, cropped and cleaned up the image.  However, no amount of cleanup can replace the missing names.

HERE IS THE CLEANED UP IMAGE, ANNOTATED 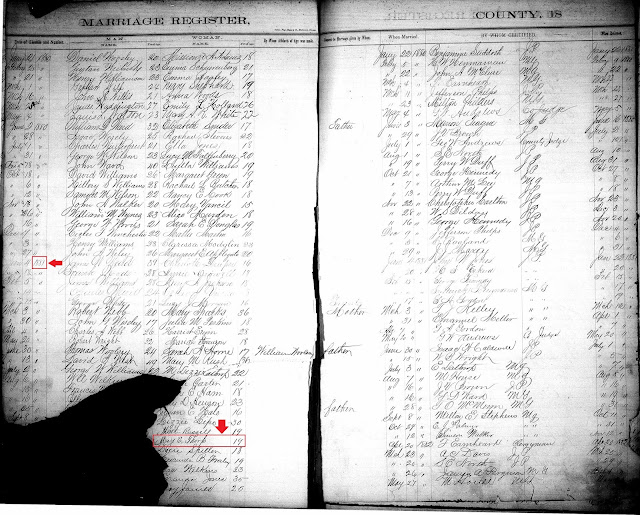 There in the lower left you can see the name of the woman – May E. Thorp, age 19.  No man’s name can be seen at all due to the damage on the page.

A close up of that section reveals the name May E. Thorp and her age, 19

This is encouraging to me though.  My May E. Thorp would have been 19 in 1881.  Another thing is the spelling of the Thorp name.  This line of the family spelled it without an “e” at the end.  Was this marriage in Sep or a later month?
According to the index I’ve copied directly from the Family Search page (see it above), the date is 12 Oct 1881.
I will be at the Family History Library for Rootstech in February of this year and will follow up on Illinois marriage records.


What would you conclude from this?  Is this the marriage record for my paternal great grandparents?  Will I ever know for sure?  Or, is this one of the cases where we come to a conclusion based on evidence we have gathered, even though we might not have all the pieces?

My questions and thoughts…..


Those are some of my questions.  I’d love to have your input on the matter.

This couple stayed married until William’s death in 1924.  May lived for 22 years after him but never remarried.