I will be writing a series of posts about my paternal great granduncle, Richard “Dick” Lindsay, throughout the year.  I heard a lot about him growing up, as we spent a lot of time with my grandmother, Marie W. Lindsay Gould, who was his niece.

Background – Richard Lindsay is the son of William Lindsay (abt 1830-1898) and Mary Wallace (abt 1832-1895).  He was born in Dundee, Forfarshire, Scotland, the youngest of 6 children.  He began working in the printing industry while living in Dundee.
According to the records I’ve located Richard came to the United States in 1885 on the ship Circassia.  From that point on, he is found living in Detroit, Michigan.
He continued working in the printing industry, finding employment at the Detroit Free Press, according to the 1890 Detroit City Directory.

By 1893 he was elected to the office of Estimator at Large for the City of Detroit.  Five years later, in 1898,  he was appointed as the Clerk of the Justice Court for Detroit. It appears that he held that job until 1912.

In Nov 1912 he was elected as City Clerk for Detroit.  This article was published regarding his election to this office.  Richard would have been 50 years old at the time of this election.

Here is my transcription of the article.

LINDSAY AND INGALLS A CHANGE FOR THE BETTER
The election of Richard Lindsay insures for the city of Detroit a business-like and careful administration of the city clerk's office, a thing the municipality has not possessed in several years.  Under the Nichols incumbency the office, so far as its chief is concerned, has been little more than a political headquarters for the hatching of plots to build up machines.  The real work for which the city created it has been left to a few clerks.
Though Mr. Lindsay has held public office for a good many years, he never has been a politician in the objectionable sense of the word, and his election at this time is largely a tribute to his personal popularity and a recognition of the fact that he appears to belive it his duty to give value received for any remuneration acquired in the public service.
In selecting Guy L. Ingalls for his deputy clerk, Mr. Lindsay begins well.  It is a matter of record that Ingalls as a journal clerk under Nichols took charge of practically all the office routine during the months in which the city clerk and his deputy were running here and there, chasing after the Bull Moose rainbow, and that whatever efficiency the office developed was chiefly due to Ingalls' willingness to do hard work.

There is every reason to expect that Lindsay and Ingalls will be honest and conscientious and capable public officials, who will devote their best energies to making their place of trust a credit to Detroit and themselves.


My great granduncle went on to serve the City of Detroit, in various capacaties, until shortly before his death in 1937.
I find no record of him every marrying or having children.  I do find that he and his older sister, Elizabeth (she was five years older than him) were enumerated in every census from 1900, until her death in 1931.  She also never married.

Of the six siblings in Richard’s family 4 of them made new lives in America, all settling in Detroit, Michigan.


Because of his active involvement in the City of Detroit, there are many newspaper articles featuring or mentioning my great granduncle Richard Lindsay.  I will be writing about them this year.

I’m very grateful to be friends with Lindsay cousins and other descendants from this family.  Several of us are genealogists and we share what we find with each other.  That's me standing in the back in this cousin reunion photo. 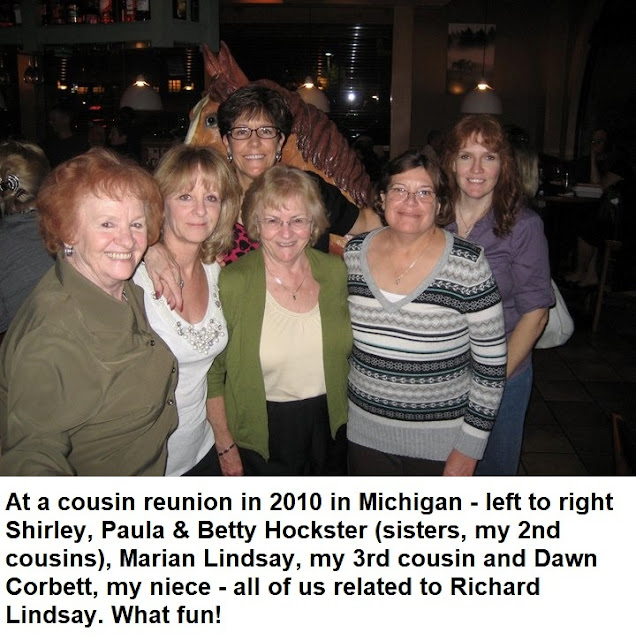 Stay tuned to learn more about my interesting great granduncle.