Today’s post is about my great grandfather, William Wallace Lindsay.

Thank you to Amy Johnson Crow who writes No Story Too Small, for this theme.

Here is his birth record from Scotland


There were 6 known children born to William & Mary as follows:

I find my William living with his family, in Dundee, Angus, Scotland, in the 1861 & 1871 Scottish census.  His father worked as a Linen Weaver.  By 1881 William is living as a boarder in the Euphemia Lamb household, aged 22, unmarried, with no occupation listed.

In the 1882 Detroit City Directory I located William W. Lindsay boarding at 19 Elizabeth e., working as a clk at Am Nat Bank.  Three entries above him on the page is Robert Lindsay, boarding with John McRobbie (Robert was married to an Isabella McRobbie for a short time, but we don’t know much about that family) 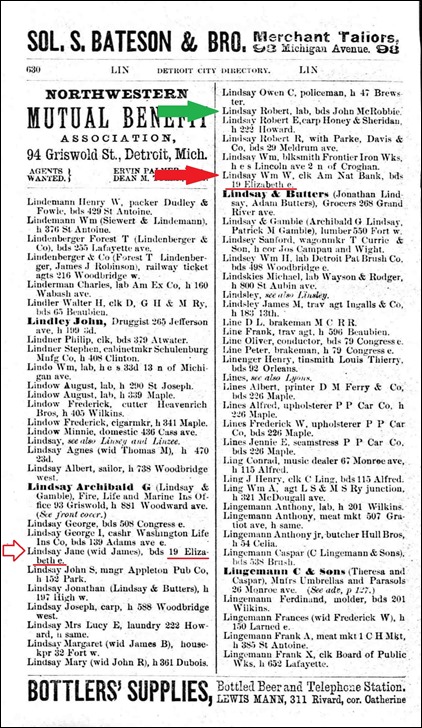 My question when I look at city directories, is always, who else is living at the same address as my ancestor?

In this case I find a Jane Lindsay (wid James) also boarding at 19 Elizabeth e.  How is Jane Lindsay?  How might she be related to us?  I have no James and no Jane in my database.

I don’t have an immigration record for my grandfather, William and his brother Robert for the time period preceding this city directory listing.  My information has him coming to the U.S. in 1886.

Further research has me coming to the conclusion that the William W. listed in this directory is not my William W.  I have excluded him after finding a U.S. census record for 1880 that lists Jane Lindsay and her son, William W., bank clerk.  Every record I have for my William W. gives his parents names as William & Mary (not James & Jane).

NOTE:  Sometimes we can go down a wrong path because names and dates are close matches.  In this case I was able to come to a negative conclusion and eliminate the incorrect information.

On 28 Apr 1886 I have a ship manifest for William Lindsay on the ship State of Indiana.  Also on this same ship, on another page is Bessie Fitzcharles.  I know that Elizabeth Fitzcharles went by the name “Bessie” and I have several records showing that nickname, including her headstone.

Here are the ship manifests showing William and Bessie.


My records originally indicated 4 children born to this couple.  However, I later discovered they may have had 5 children.  While I was growing up, I was only aware that my grandmother had 2 sisters and one brother.  That fifth child may have been stillborn or died shortly after birth.  However, since a court record and one census record list 5 children born to the couple, I have included this child as “unknown” in my database.

Here is a family photo showing William & Elizabeth with their 4 children.  This is the only photo I have of my great grandfather, William Wallace Lindsay.  Although my family took lots of pictures throughout the years he was alive, I haven’t found any others of him.


I find William & Elizabeth with four children in the 1900 census in Detroit.  He is working as a Machinist.

In the 1910 census I find William Sr. age 49 and his 15 year old son, William, Jr. living in the Roller household in Detroit.  This is evidence that there might have been trouble in the marriage as I find his wife, “Mrs. Elizabeth Lindsay”, working as a housekeeper in the home of Christ Hough and living in Mt. Clements, Macomb, Michigan.  Two doors from her is Charles Hart who is connected to my Gould family.  This is also one of the records that lists her as the mother of 5 children, of whom 4 are living.

On 18 May 1912 my great grandparents divorce was made final.  It was William who filed for the divorce and the grounds were “cruelty.”

I cannot locate him in the 1920 U.S. Federal census, but not for lack of trying.

Both my cousin, Paula, and myself believe that we have located a marriage record for William in the Ontario Marriages on 8 Jan 1912.

This would have been prior to his divorce from Bessie.
Here is the record we found.


I have created a red box around identifying items on this record.  I have indicated with a red star items in conflict with what we know.

List of identifying items:
Name – William W. Lindsay
Place of Birth – Mich. (William W. Lindsay was born in Scotland)
Nationality – Amer. (this could be true as he applied for citizenship)
Bachelor or Widower – W (indicating he is a widower, which he isn’t)
Age 49
Religious denomination – Pres.
Name in full of Father – Wm. Lindsay
Rank or profession of Father – Machinist
Name and maiden name of Mother – Mary Wallace
Status in #5 on this form – Widower (again, he is not a widower)

NOTE: It seemed to be a Lindsay family tradition, in some cases, to go over to Canada from Detroit to get married.  But, it seems that was only the tradition if the marriage was somehow questionable.  Two of William’s daughters, Bessie and Marie were married in Windsor, Ontario, Canada.  One listed herself as a spinster, when she wasn’t, and we believe the other one was pregnant at the time of her marriage in 1912.

I have tried to locate any other record with William & Sarah in it and I am unable to.

The last record I have for William when he was living, is the 1930 census.  He is living with his daughter, Bessie and her family at 9416 Burnett in Detroit, Michigan.  He is listed as a widower.

William died on 23 Apr 1931 in Detroit.  His cause of death was Cerebral hemorrhage.  He is buried in Woodmere Cemetery in Detroit along with other Lindsay family members.

His ex-wife Bessie is buried at Grand Lawn Cemetery with her daughter Marie Lindsay Gould and other Gould family members.

Here is his death certificate.  This was provided to me by the State of Michigan and was the best copy they could offer.


I have an obituary and a funeral notice for William Wallace Lindsay.  These were shared with me by my cousin, Marian.

There is a memorial on FindAGrave for William, but no photo of his headstone.  My cousin, Marian and I have been to Woodmere Cemetery to the Lindsay section.  At that time we could not locate a headstone.  I later learned that it was buried 12” down.  A member of the cemetery staff found it.  It has not been photographed.

His cemetery card states that he was buried on 25 Apr 1931 in the South Lake Section, Lot 16.  No grave number is listed.

My thoughts – I used to hear my grandmother, Marie, William’s daughter, talk about her family.  I don’t remember her talking much about her father.  Why?  Was there a lot of bitterness after he divorced Bessie?  William had at least 8 grandchildren, most of whom were in Detroit, including my father.  Why is he not seen in any of our family photos?  I’d like to know more, but maybe I never will.

If you are connected to this family in any way, I’d love to hear from you.

Birth Records with Incorrect Names - What Would You Think?