BREAKING DOWN A BRICK WALL

Elizabeth "Bessie" Fitzcharles Lindsay - This is her name.  She is my Great Grandmother.  Grandmother to my Dad.  Born in Scotland in 1864.  Married to William Wallace Lindsay.  Mother of 4 children (that I know of).  Those children were: Ellen W. Lindsay, Marie Wallace Lindsay (she's my grandma), Bessie Lindsay and William F. Lindsay.  I have one picture of her, taken with her husband and 4 children in about 1896.

For the past 10+ years I have wondered who Elizabeth Fitzcharles' parents were.  I knew very little about her.  My grandmother passed away in 1970 and my Dad in 1991.  I sure couldn't ask them.  I knew some things about her life and death.
Who are her parents?
How do I find out who they are?

I wasn't sure how to answer those questions.  Working with the records overseas is a learning process and I'm still learning.  I had tried over the years to locate records on various websites, such as Ancestry.com or scotlandspeople.gov or familysearch.org.  No luck on any of them.

Here's what happened.  About a month ago, my cousin, Paula, told me that our 2nd cousin was taking a trip to Scotland.  Paula (who, by the way, is now hooked on genealogy, gee, I wonder how that happend?), thought that I should talk to Debbie before she went to Scotland, so I could give her some family information.  I contacted Debbie and sent her a family group record  for William & Elizabeth Lindsay.
TIP: Family Group Records are reports you can create from your database with just a click or two of your mouse.
Note: the name of Elizabeth's father is given as Nicholas Fitzcharles and her birthdate as 20 Jul 1866. His name & her birthdate are listed on her death certificate. 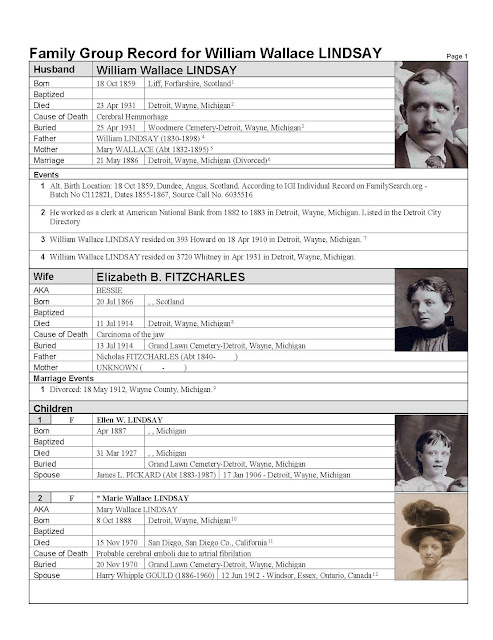 ﻿
This group record gave Debbie the information on the family that she would need to do any research while she was in Scotland.  Keeping in mind that cousin Debbie is not a genealogist.  All I said to her before she left was, anything she could find would be greatly appreciated.
Debbie returns from Scotland and notifies me and Paula via email, that she has found some information that she thinks we will like.  I told her if she'd found anything on Elizabeth Fitzcharles that I'd book a flight and come back there and give her a hug.  She told me "book the flight."
Course now I'm very excited and can't wait to hear of her discoveries.  But, we decided that we would share this information via 3-way conference call on Monday.  That was 3 whole days I had to wait.  Kinda like Christmas.  The anticipation is part of the fun.
Monday morning, 9 a.m.  The phone rings and it's my cousins Paula & Debbie on the line.  Debbie says that while she was in Aberdeen, she had time to stop in at the Aberdeen & North-East Scotland Family History Society.  She mentioned my name and said that I was a member there.  The helpful volunteer looked in their files and found my name and........da da....the family pedigree chart I had submitted with my membership in 2010.  Unfortunately, I had not renewed my 2012 membership.  Lookups are free for members.  So, what does Debbie do?  She joins.  The cost is only $25 and saves any hourly fee charged for looking up records. 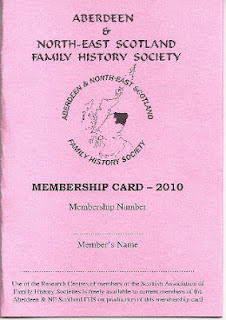 The volunteer begins looking through records for anyone named Nicholas Fitzcharles who had a daughter named Elizabeth or Bessie or Betsy, born about 1866.  No Nicholas Fitzcharles anywhere in the records.  HOWEVER, there is a John Fitzcharles & Elizabeth McGovern who gave birth to a little girl named Elizabeth on 24 Jul 1864 in Alyth, Perth, Scotland!  The record even gives the dates of the marriage of John Fitzcharles & Elizabeth "Betsy" McGovern as 6 Oct 1854 in Dundee, Scotland. I'm beyond excited.  There it is - the elusive clue, something to work on, a trail to follow, information to try and verify.  This is all we ask for as Genealogists.

Next Step - Try to verify this information by finding vital records and census records.

UPDATE - Since writing this post I have located all the documents necessary to affirm that John Fitzcharles and Elizabeth McGovern are my great grandmother's parents.