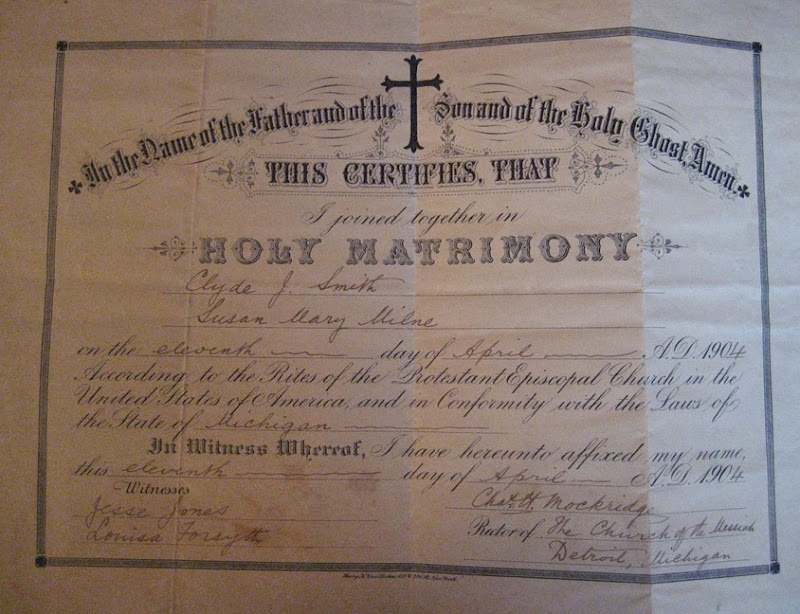 My great grandmother, Susan Anne Gillespie married her second husband Clyde J. “C.J.” Smith on 11 Apr 1904 in Detroit, Wayne, Michigan.  She had lost her first husband, my great grandfather, Andrew Charles Milne to tuberculosis in Dec 1892.  It must have been a very sad time, as Susan was pregnant with their fourth child, a daughter, who was born in Jun 1893, seven months after the death of Andrew Milne.

One of the interesting things about the marriage of Susan and Clyde, is the age difference.  Susan was 43 years old at the time of the marriage and Clyde was just 25 years old.  This is the first time, in our family, I’ve found a wife that much older than a husband.
I always wonder how people met.  That is one of the questions I would ask all of my ancestors….if only I could. 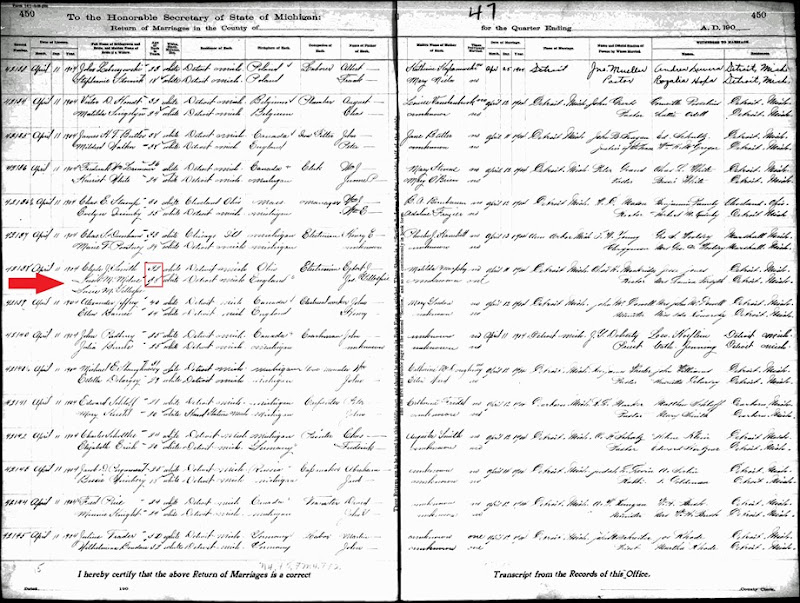 I have found no record of any children born to this couple.  Susan’s two living children would have been 21 and 11 at the time of the marriage.  My grandfather, Joseph A. Milne, age 21 in 1904, is listed in the Detroit City Directory listing as living at the same address as Clyde J. Smith.

Clyde worked as an Electrician and a Mechanical Engineer, according to the 1920 census and various city directory listings.  I have yet to be able to find Clyde & Susan in the 1910 census.  I looked again today with no luck.

Unfortunately, Susan became a widow for the second time when Clyde died of a brain tumor on 14 Nov 1927, in Detroit, Wayne, Michigan.  He was only 49 years old at the time of his death.

Susan did not remarry, but lived another 20 years, passing away at age 87 on 12 Nov 1947 in Ypsilanti, Washtenaw, Michigan.
Both Clyde and Susan are buried at Woodmere Cemetery in Detroit.  In the same plot are her first husband, Andrew Charles Milne, their stillborn son, A.C. Milne and Joseph Milne’s oldest daughter, Dorothy, who died at age 13.  Sadly, there are no headstones for any of them.

One of my goals is to somehow find a way (aka the money) to erect a headstone in memory of these five family members who deserve to be remembered.  Here are the FindAGrave memorials for Clyde #39725148 and Susan #39725085.