Elizabeth Gaydon is my 3rd great grandmother.  She was born
30 Jan 1813 in Barnstaple, Devon, England.
Her parents were Richard Gaydon and Mary Thomas

The next record I have for Elizabeth is her marriage to Henry Burgess on 14 Nov 1832 in Barnstaple, Devon, England.


NOTE:  I began looking for the marriage record of Elizabeth and Henry Burgess in July 2009.  At the time I did not know what Elizabeth’s maiden name was.  I found several records that were possible, but Henry Burgess is a common name and of course, so is Elizabeth.  I keep research notes in my Legacy database and I date each entry.  Here’s the entry from my notes when I located the marriage record and my conclusions as to why I believed it to be the correct one.  Keeping research notes is critical for us as we look for information on our ancestors
.
7/18/14 - I believe I have just located the correct marriage record on FindMyPast.co.uk.  I believe this based on the name of the groom - Henry Burgess, the place - Barnstaple, the county - Devon, the year of marriage is before the recorded birth year of the first child - 1832 and the bride's name is Elizabeth Gaydon - I have her name as Elizabeth Gaden from the death certificate of their daughter Susan.

I find Henry and Elizabeth enumerated in the 1851 and 1861 census in Tiverton, Devon, England.

Here’s the 1851 census.  From my post 2 weeks ago about Thomas Gillespie, you’ll note that Thomas and his family are living next door to the Burgess family.  Susan Burgess later married Joseph Gillespie. 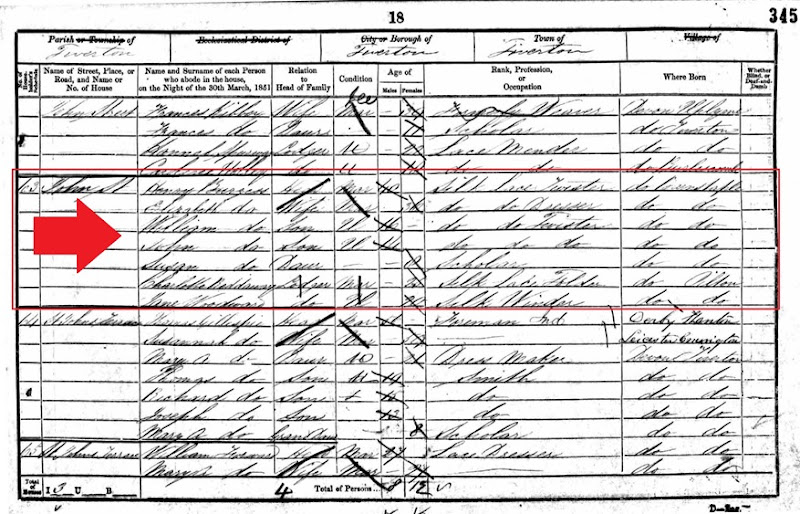 Here’s the Burgess family in the 1861 English census.  The children are out of the house, but I notice the same boarder that was with them in 1851, Charlotte Rudaway. I wonder if she is a relative? 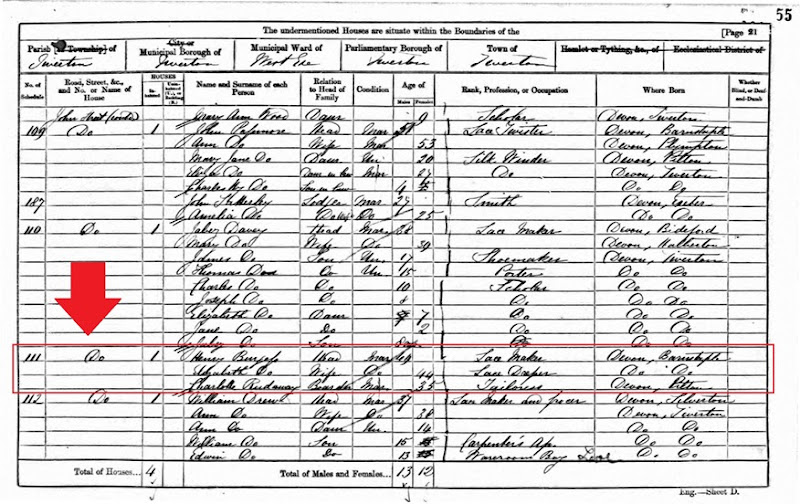 Elizabeth is next found as the person who paid for her daughter Susan and husband Joseph Gillespie and their two children to come to the United States on 23 Dec 1862.

Source for this information came from a book I purchased titled Passage to America 1851-1869: The Record of Richard Elliott, Passenger Agent, Detroit, Michigan, by Mary Lou Straith Duncan  My family is listed on page 68.  This book was published by the Detroit Society for Genealogical Research c/o Burton Historical Collection.  The ISBN is 0-943112-22-2.  You can find the book here.  Scroll down to the 12th item on the page.

The transcript from page 68 gives the following information:
Date: 23 Dec 1862
No. 3120
By Whom Paid – Mrs. Elizabeth Burgess
Port of Departure – Liverpool
Destination – Detroit
Passenger’s Names – Joseph Gillespie, Susan Gillespie, 2 infts
Total cost – 56.00 (there is no notation as to what currency)

There are two Elizabeth Burgess’ listed on other pages in this book.  One is on page 64, item 3026, travel date 27 May 1862.  The other on page 113, item 4219, travel date 16 Aug 1866.  Could either one of these be our Elizabeth?  Since no ages or other identifying information is given, it’s difficult to determine.  I find no passenger records to go along with these dates.

In the 1880 census I find Elizabeth Burgess living with her daughter Susan and husband Joseph at 71 Jones St., Detroit, Michigan.

QUESTIONS:
I located the notice of Elizabeth’s funeral. This notice was published in the Detroit Free Press, Sunday, May 18, 1884, page 1.  It reads as follows:

“BURGESS – At the residence of her son-in-law, J. Gillespie, 71 Jones street, on Friday, May 18, at ___o’clock p.m, Mrs. Elizabeth Burgess, aged 70 years, after a long and painful illness.  The funeral will take place on Monday afternoon at ___o’clock from residence.  Friends of the family invited to attend.”

I don’t know what the “painful illness” was.  The death certificate I received from the State of Michigan is woefully lacking in detail.  I would like to see the actual register entry for her death and will look for it on my next visit to the Family History Library. 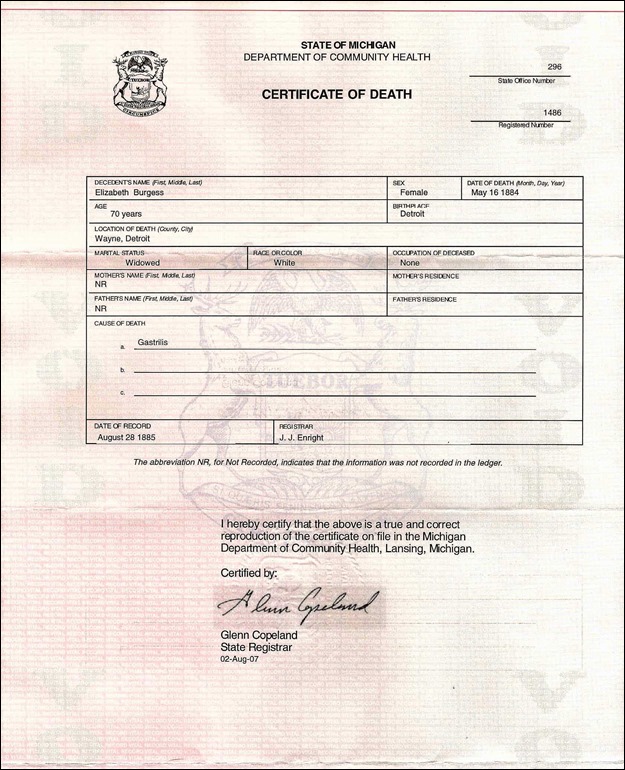 I was able to locate a copy of Elizabeth’s probate record.

Here is the cover of the will packet.


Here is the first page of the probate record and my transcription of it. 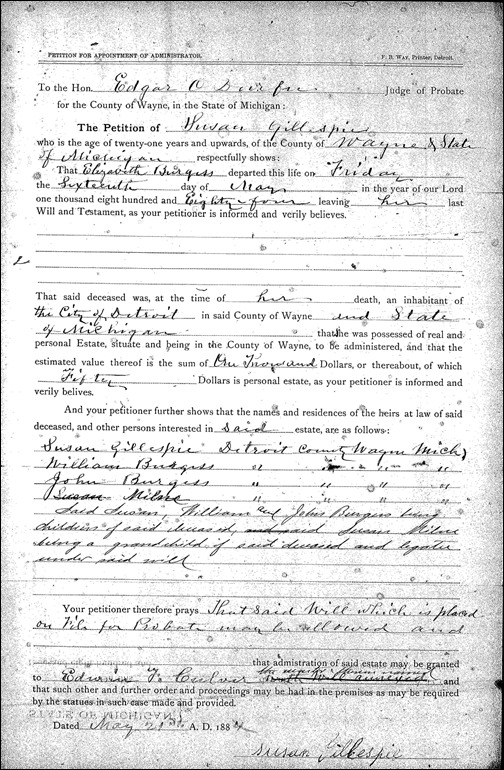 PETITION FOR APPOINTMENT OF ADMINISTRATOR

To the Hon. Edgar O. Durfee, Judge of Probate for the County of Wayne, in the State of Michigan:

The Petition of Susan Gillespie who is the age of twenty-one years and upwards, of the County of Wayne of State of Michigan respectfully shows:

That Elizabeth Burgess departed this life on Friday the Sixteenth day of May in the year of our Lord one thousand eight hundred and eighty-four leaving her last Will and Testament, as your petitioner is informed and verily believes.

That said deceased was, at the time of her death, an inhabitant of the City of Detroit in said County of Wayne and State of Michigan that she was possessed of real and personal Estate, situate and being in the County of Wayne, to be administered, and that the estimated value thereof is the sum of One Thousand Dollars, or thereabout, of which Fifty Dollars is personal estate, as your petitioner is informed and verily believes.

And your petitioner further shows that the names and residences of the heirs of law of said deceased, and other persons interested in said estate are as follows:

Your petitioner therefore prays That said will which is placed on file for probate may be allowed and that admistration [misspelled on form] of said estate may be granted to Edwin F. Culver the _______________ named and that such other further order and proceedings may be had in the premises as may be required by the statues in such case made and provided.

I was able to visit Elizabeth’s burial place in Detroit, when I went there in June 2007.  She is buried at Elmwood Cemetery near her daughter, Susan and son-in-law Joseph Gillespie.  The back of her headstone says “wife of Henry Burgess died May 16, 1884 aged 69 years.”
You can see the front of her headstone in the picture at the top of this post. 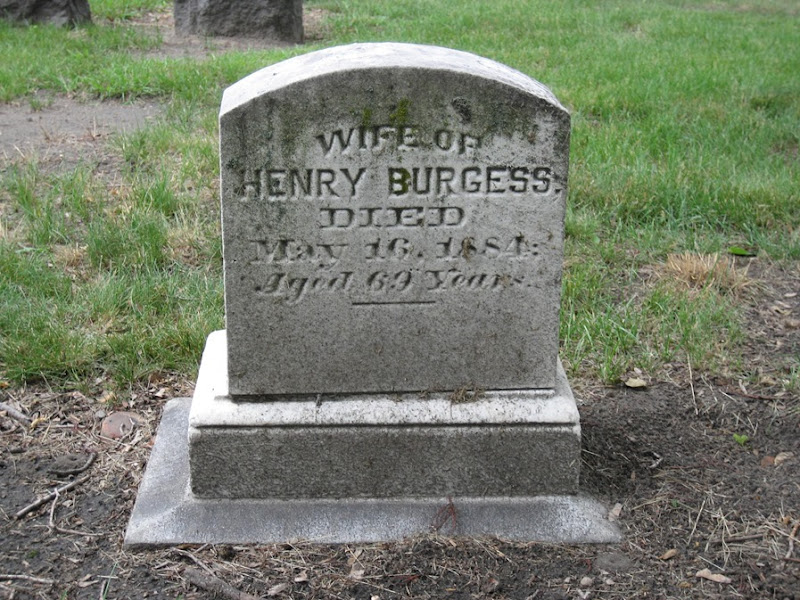 I still don’t know anything, other than names, for Elizabeth’s parents or if she had any siblings. Work yet to be done.