William Lindsay is my paternal granduncle
William Lindsay was the youngest child born to William Wallace Lindsay (1859-1931) and Elizabeth “Bessie” Fitzcharles (1864-1914).  He is a brother to my paternal grandmother, Marie Wallace Lindsay.
My grandmother always spoke fondly of her brother “Bill.”  He was alive well into my 20’s, but I never recall meeting him.  If I did, it would have been when I was a young child living in Detroit.  Bill had three older sisters; Ellen (1887-1927), Marie (1888-1970) and Bessie (1892-1971).  The family grew up in Detroit, Michigan.

Here he is as a little boy, with his parents & sisters.  He isn’t officially a Jr., but the photo has been labeled that way for clarity. 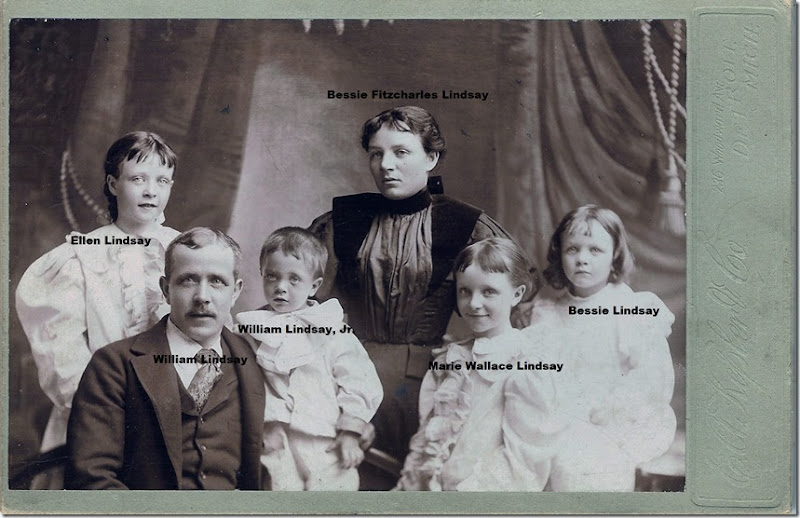 Bill is reported to have been married several times.  I am in touch with my cousins who are descended from his sister Bessie and another cousin, one generation removed.  Several of us are genealogists and we have put together a picture of Bill’s life as best we can.

He was born in Detroit, Wayne, Michigan probably in 1894 (the exact month & day varies depending on the record).  I have the following records to document his life:

Question I asked myself – why are Bill and his father, William enumerated without any other family members?  I think I know the answer, based on my research.  I located Bill’s mother (William’s wife) working as a Housekeeper just north of Detroit, in Mt. Clemens, Macomb, Michigan.  She is enumerated as Mrs. Elizabeth Lindsay.  Just two years later a divorce was finalized between William Lindsay and his wife Elizabeth.  They must have separated by the time the 1910 census was taken.  He filed for the divorce on the grounds of “cruelty.”  The divorce was granted on 18 May 1912.  I have the divorce record and published it in another blog post.  You can read about it here 52 ANCESTORS IN 52 WEEKS ~ Week #3–My great grandfather–William Wallace Lindsay 1859-1931 (a bit of a mystery)

Now back to Bill.  He married Gertrude May Watson 10 Feb 1912 in Windsor, Essex, Ontario, Canada.  Gertrude was born in Canada 8 Aug 1895 and immigrated to the United States in 1909.  I have no idea how Bill & Gertrude met each other.  However, their son, William Harold Lindsay was born 3 months after their marriage on 10 May 1912 in Detroit, Michigan.

Interesting note about this family of Lindsay siblings.  Ellen was the oldest and she married her husband James Frederick Pickard in Detroit in 1906.  ALL three of the other siblings, Marie, Bessie and Bill married their spouses in Canada.  I wonder if there were laws in place in the United States or Michigan in particular, that influenced their decision to marry in Canada?

Why is this significant?  If you take a look at the marriage records of those three siblings and compare them to the births of children or the status of the sibling getting married, there are some details that stand out.  Such as: children born within a time frame considerably less than 9 months (two of the siblings, Marie and Bill).  And for Bessie, she listed herself as a Spinster for her second marriage, when in fact, she was still married to her first husband.  We have the documents for all of this information.  Certainly a colorful group.  My cousin Paula often speaks of her grandma Bessie being a bit wild.

When you find facts, like those listed above, about your family, don’t let it bother you.  People are people and history is history.  What we uncover are just the facts and most of it will not change relationships we have formed or memories we share.

1916 - Gertrude and Bill divorced just four years after their marriage on 4 Dec 1916.  Bill is listed in the Detroit City Directory in 1916 as again living with his father, William and working as a Chauffeur.

1917 – I have a World War I Draft Registration Card for Bill.  He lists himself as single, working as an Auto Driver for Detroit Public Works and having a child, age 5.  That must be his son, William Harold Lindsay, born in 1912.

1928 – Less than a month after his divorce from Vera Allen Lindsay, Bill marries for a 3rd time, to another Vera.  This time Vera Kidd who also went by the name Matilda.  On the marriage record for this couple Bill states he has never been married.  I guess those first two wives don’t count.  His parents names are correct on this marriage record as is other vital information for him, so I have no doubt it’s him.

1930 – Bill and “Matilda” are living in Detroit, renting a home and he works as a Repair Foreman for automobiles.  No children are listed in the residence.  His children must be living with one of the other wives.

1942 – Bill is registered in the World War II Draft Registration – he is living at 8589 Mendota in Detroit.  He is 47 yrs. old, born in Detroit on 5 Jul 1894.  He is working for the Civil Service Commission/City of Detroit/Div. of Motor Transportation.  His physical description if 5’6”, 155 pounds, blue eyes, brown hair and light complexion, no scars.

1950’s – By the mid 1950’s Bill has either remarried or has a girlfriend named Alice Marie Penn.  They can be seen at the dining table at the home of Everett & Mary Hockster.  Also at this table are Bill’s sister Bessie and Everett & Mary’s daughters Betty & Paula. 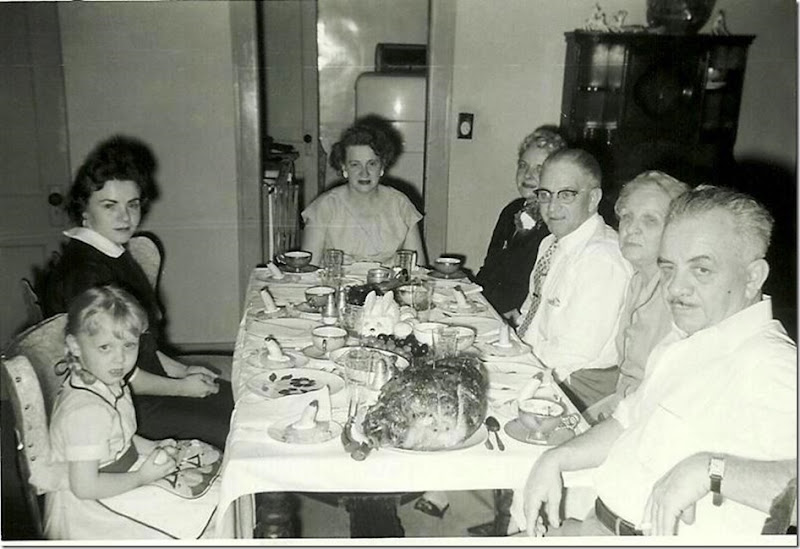 I find no other public records for William “Bill” Lindsay until his death on 10 Apr 1976 in New Port Richey, Pasco, Florida.
In researching this blog post I located both a death notice and an obituary for Bill.  The obituary states that he had moved to Florida 24 years prior to his death, which would have been 1952.  He was apparently a member of the Baptist church and the BPOE 2284 of New Port Richey, Florida.  I also notice there is no mention of his two sons, only of his nephews, which would be Everett Hockster and my father, Harry Norman Gould. 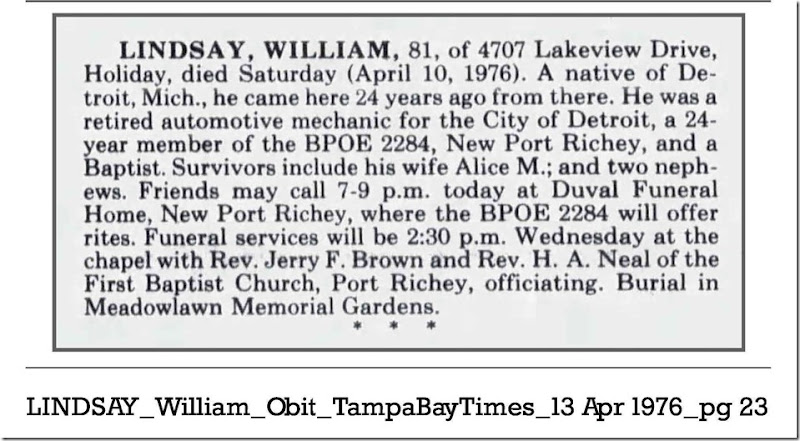 My question – What does BPOE stand for.  I figured it was some sort of organization.  I Googled it and found this definition: “Benevolent and Protective Order of Elks. ... The Benevolent and Protective Order of Elks (BPOE; also often known as the Elks Lodge or simply The Elks) is an American fraternal order founded in 1868 originally as a social club in New York City.”

Here, used with permission from David England is their headstone. 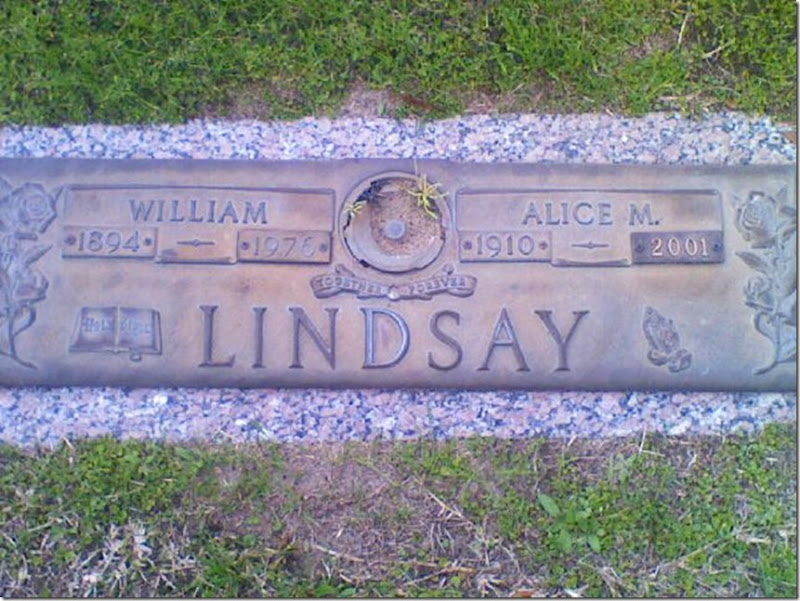 Conclusion – It seems that Bill finally settled down with one woman, Alice, his fourth wife.  There are family rumors that he had more than four wives, but I have no evidence of that.  I hope he was happy in those last 25 or so years of his life.  I do wonder why his sons, William and Robert weren’t mentioned in his obituary.  I’ve heard from one family member that his son William didn’t like him and spoke poorly of him.  The reasons for that may forever remain unknown to us.  Those that are gone take their secrets with them to the grave.  I do know that my grandmother, Marie Lindsay Gould always spoke with love when talking about her brother Bill.

If you are related to anyone mentioned in this story, please contact me, I’d love to hear from you.


ALL RIGHTS RESERVED.  NO USE WITHOUT PERMISSION
Posted by Diane Gould Hall at 5:35 PM