FRIDAY FINDS ~ The obituaries for both sons of my Granduncle, William “Bill” Lindsay–Let’s talk about William Allen Lindsay and Robert Richard Lindsay 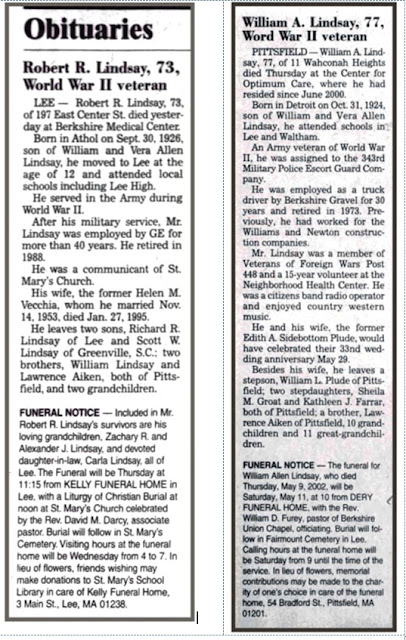 My grandmother, Marie Wallace Lindsay had 3 known siblings; Ellen W. Lindsay (1887-1927), Bessie Lindsay (1892-1971) and William “Bill” Lindsay (1894-1976).  There was probably another sibling, based on census and divorce records stating there were 5 children in the family.  However, I’ve only ever found names of 4. Those four are the children of William Wallace Lindsay and Elizabeth Fitzcharles.

I’ve written a lot about my Lindsay family because it’s my paternal grandmother’s line and because I keep finding more information.
Today let’s concentrate on my Granduncle, Bill Lindsay’s two sons.
William Allen Lindsay and Robert Richard Lindsay were Uncle Bills’ sons by the 2nd of his four wives, Vera Violet Allen.  They married in 1919 and divorced in 1928.
I never heard any talk about these nephews of my grandmother.  Perhaps I was too young to listen to anything being said, or perhaps, after the divorce when the children were young, they never saw them again? I do know that Vera & the boys moved to Massachusetts, from Detroit, and it appears that’s where the two boys stayed.
I’m proud to say that these young men, William & Robert are my 1st cousins, once removed.  Both of them served during World War II.  I found this out when I located their obituaries on newspapers.com just a couple of days ago.


Here is my transcription of Robert Richard Lindsay’s obituary, published in The Berkshire Eagle 22 Feb 2000, page 8

Robert R. Lindsay, 73, World War II veteran
LEE, BERKSHIRE Co., MA - Mr. Robert R. Lindsay, 73, of 197 East Center St. died yesterday at Berkshire Medical Center.
Born in Athol on Sep 30, 1926, son of William and Vera Allen Lindsay, he moved to Lee at the age of 12 and attended local schools including Lee High.
He served in the Army during World War II.
After his military service, Mr. Lindsay was employed by GE for more than 40 years. He retired in 1988.
He was a communicant of St. Mary;s Church.
His wife, the former Helen M. Vecchia, whom he married Nov 14, 1953, died Jan 27, 1995.
He leaves two sons, Richard R. Lindsay of Lee and Scott W. Lindsay of Greenville, SC.; two brothers, William Lindsay and Lawrence Aiken, both of Pittsfield, and two grandchildren.

FUNERAL NOTICE - Included survivors are his loving grandchildren, Zachary R. and Alexander J. Lindsay, and devoted daughter-in-law, Carla Lindsay, all of Lee.  The funeral will be Thursday at 11:15 from KELLY FUNERAL HOME in Lee, with a Liturgy of Christian Burial at noon at St. Mary's Church celebrated by the Rev. David M. Darcy, associate pastor.  Burial will follow in St. Mary's Cemetery. Visiting hours at the funeral home will be Wednesday from 4 to 7.  In lieu of flowers, friends wishing may make donations to St. Mary's School Library in care of Kelly Funeral Home, 3 Main st., Lee, MA 01238.

Here is my transcription of William Allen Lindsay’s obituary – published in The Berkshire Eagle, 10 May 2002, page 10

William A. Lindsay, 77, World War II veteran
PITTSFIELD - William A. Lindsay, 77 of 11 Wahcohan Heights died Thursday at the Center for Optimum Care, where he had resided since Jun 2000.
Born in Detroit on Oct. 31, 1924, son of William and Vera Allen Lindsay, he attended schools in Lee and Waltham.
An Army veteran of World War II, he was assigned to the 343rd Military Police Escort Guard Company.
He was employed as a truck driver by Berkshire Gravel for 30 years and retired in 1973.  Previously, he had worked for the William and Newton construction companies.
Mr. Lindsay was a member of Veterans of Foreign Wars Post 448 and a 15 year volunteer at the Neighborhood Health Center.  He was a citizens band radio oerator and enjoyed country western music.
He and his wife, the former Edith A. Sidebottom Plude, would have celebrated their 33rd wedding anniversary May 29.
Besides his wife, he leaves a stepson, William L. Plude of Pittsfield; two stepdaughters, Sheila M. Groat and Kathleen J. Farrar, both of Pittsfield; a brother, Lawrence Aiken of Pittsfield, 10 grandchilden and 11 great grandchildren.

FUNERAL NOTICE - The funeral for William Allen Lindsay, who died Thursday, May 9, 2002, will be Saturday, May 11 at 10 from Dery Funeral Home, with Rev. William D. Furey, pastor of Berkshire Union Chapel, officiating.  Burial will follow in Fairmount Cemetery in Lee.  Calling hours at the funeral home will be Saturday from 9 until the time of the service.  In lieu of flowers, memorial contributions may be made to the charity of one's choice in care of the funeral home, 54 Bradford St., Pittsfield, MA 01201.

Not only did I learn of the brother’s service in World War II from these obituaries, I also learned they have another brother Laurence Aiken.  Since their mother, Vera, was married to a man named Laurence Aiken, after her divorce from William Lindsay, this must have been their child and he would be a half brother to the two men. More research to do.

If you are related to anyone mentioned in this post, please contact me.  I’m sure there must be cousins out there.  Do any of you have photos of these two men or their families?  I’d love to see them.