Transcription of this obituary

JAMES A. COOPER
The Optic is called upon to chronicle the death of another well known and respected resident of Walton and a pioneer, Mr. James Cooper, whose death occurred Thursday, March 14th, after a long illness.
James A. cooper was born May 31st, 1822 in the township of Conquest, Cayuga Co., New York and departed this life March 14th 1907 at his home in Walton, Eaton Co., Mich., aged 84 years 9 months and 14 days, where he has resided since 1863.  At the age of 14 he came to Mich. with his uncle Aaron Brooks and settled in the township of Kalamazoo, section 36. At the age of 17 he removed to Bellevue and learned the blacksmith trade which he followed for 35 years.  He married Jan 1st, 1850 to Miss Maria Thornton who survives him.  To this union three children were born: Edward, who died aged three years; Jennie, wife of Simeon Cole who died Oct. 25, 1889 and Marvin by who he was cared for in declining years.  Mr. Cooper was of genial disposition, a kind husband and father, a good neighbor and an honest man and had many warm friends.  Thus one by one the old pioneers, those hardy, fearless men and women who converted a wilderness into land of plenty and comfort, pass on to the great beyond.
Funeral from his late home Sunday at ten o'clock conducted by Prof. Wright of Olivet. Burial at Bellevue.

James is my 3rd great granduncle on my paternal side.  He is the son of my 4th great grandparents.

Here’s how we are connected

James A. Cooper was one of 6 children born to Jacob Cooper and Mary Polly Byrne.  After Jacob’s death in 1827, at the young age of 33, Mary remarried to Benjamin B. Cosgrove and together they had 3 children, giving a total of 9 children born to Mary.

James was the 4th born and would have grown up in the house with most of those 9 children.  Since he was born in 1822 in Conquest, Cayuga, New York, I wonder what their life was like? The town of Conquest was formed in 1821, just the year prior to James’ birth. James became a blacksmith and it makes me wonder if that was the occupation of his father, Jacob?

The current population of Conquest, New York is only 1,759.  So, it probably was a very small community back when James and his parents and siblings lived there.  The town is located between Rochester and Syracuse, New York and not far from Lake Ontario.

Here’s a map showing the location of Conquest in New York state. 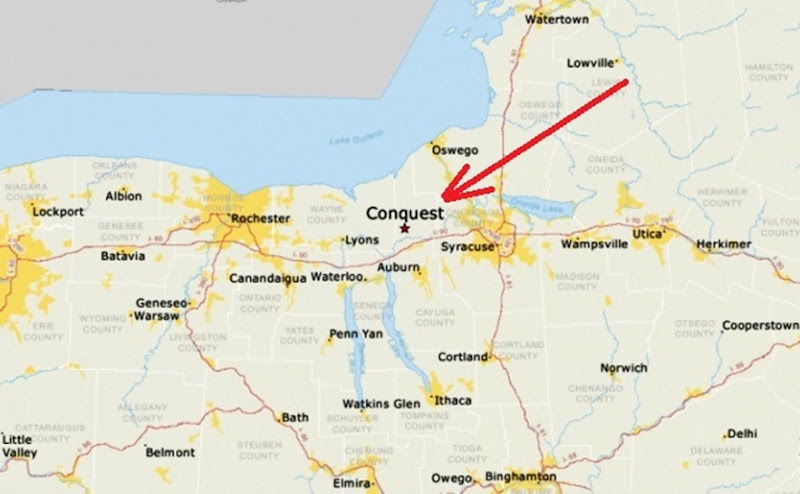 Here is an 1825 map of Cayuga County, showing the location of Conquest within the county. 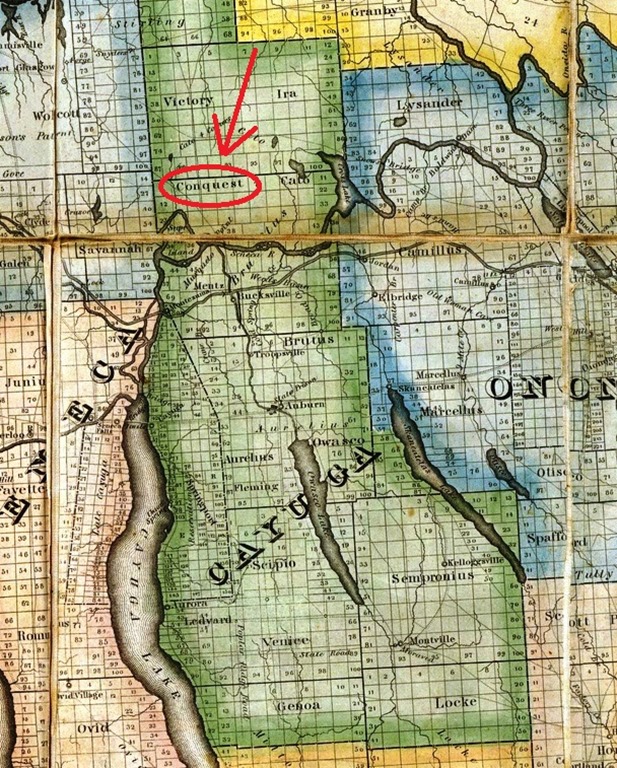 When James was 14 he moved to Michigan, settling at age 17 in Bellevue.  At age 20 he married Maria M. Thornton and together they had 3 children.  A son Edward who died at age 3 yrs., a son James Marvin who lived to age 73 and a daughter, Mary Jane who died at 30.

If you are related to this family I would love to hear from you.

Surname Saturday – Copper – Have I really gone back 3 more generations?