Mary J. “Polly” Thorp was born 30 Sep 1841 in Skaneateles, Onondaga, New York.  She is one of 6 children born to Monson Thorp, Sr. and his second wife, Lany Cooper. Monson had two older children born to he and his first wife Ann Eliza Armitage.

All of the children were born in Skaneateles, Onondaga, New York.  From the census records it is stated that Monson’s occupation was Wagon Maker until 1880 when he is listed as a Fisherman. I also have newspaper articles stating the Monson was an Overseer of Highways in 1841, a member of the Horse Thief Society in 1854 and he ran for Constable in 1855 and was enumerated as a Constable in the 1870 census.

Mary, it seems, grew up in a household with 7 other children and a father who worked all his life to provide for his family.  I’ve looked at all the census records and I cannot locate any kind of a street name in order to see where they might have lived in Skaneateles.

Skaneateles is a town located in the northern central area of New York state, west of Syracuse.  The city is located at the northern tip of one of the “finger lakes” in New York.  I wonder if the children in the Thorp household spent time ice skating, fishing and enjoying the surrounding lakes. 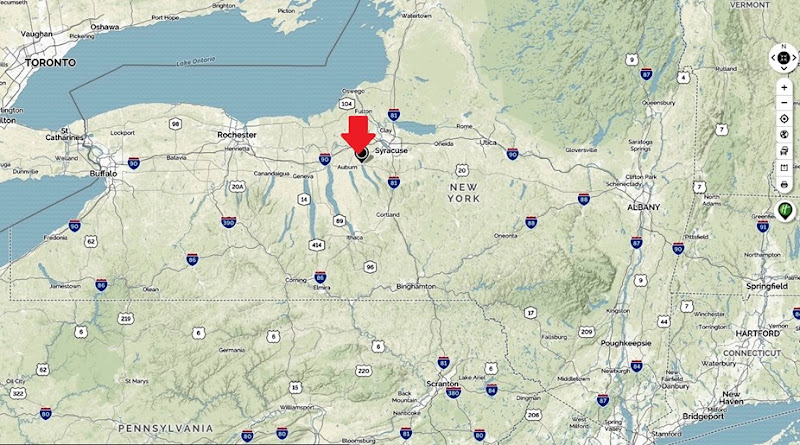 Mary “Polly” Thorp married David Preston Flower before 6 Jun 1860.  That’s the closest I can come to a date for their marriage.  She would have been 18 at that time.  They are enumerated together, with the last name Flower in an 1860 census, living with his parents and his married brother, Rodney, in Prairieville, Barry, Michigan.  I’ve not been able to locate their marriage record.  Their first child, Alice was born 28 Jul 1860.  This couple went on to have four more children; Gordon Wallace born 25 Dec 1864, Minnie born 14 Jan 1869, Etta born 23 Apr 1871 and Harriet “Hattie” born 9 Oct 1876.

David is listed as a Farmer on each census I have for this couple.  And, Mary is a housewife.

Here is the 1870 census for this couple.  Of note is the SURDAM family living next door and another FLOWER family living close by.  The Surdam family is Mary’s sister, Edith and her husband George B. Surdam.  The other Flower family on the page are David’s father, Horace, mother Hannah and brother Rodney.

NOTE:  Always remember to look at every entry on a census and check the pages prior to and after the one containing your ancestor. 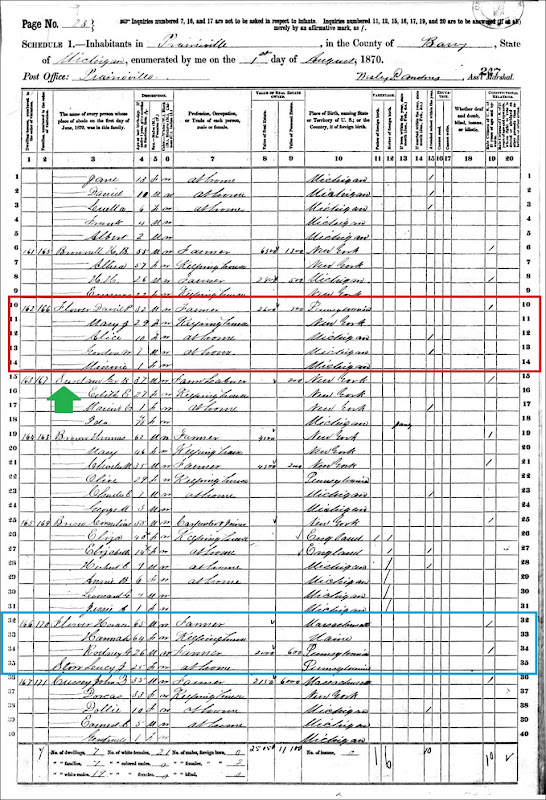 I don’t know much more about Mary’s life.  Was she happy?  What was she a good cook, a good seamstress or did she excel at gardening?  Did she like to read or write?

One thing I know is that all 5 of the children I know of, lived to adulthood.  Alice the oldest went on to marry first Fred B. Draper, who was killed by a tree limb falling on him, just two years after they married.  Alice next married Andrew J. Smith.  She lived to the age of 73.  Minnie the next oldest daughter married Frank B. Morris in 1899 and she lived to age 67.  Etta married Horace J. Gilbert in 1896 and she lived to be 88.  Hattie, the youngest daughter never married and lived to the age of 96.

The only child I didn’t mention above, was David and Mary’s son, Gordon Wallace Flower.  He married on 5 Oct 1896, Lovina/Sovina McNinch.  Gordon was 31 years old at the time and Lovina was 16. Three days after the wedding, which took place in Hastings, Barry, Michigan, Gordon committed suicide by overdose of morphine.  Why did he do that?  You can read the story about Gordon in my blog post Friday Finds – Gordon W. Flower, dead, only 3 days after his marriage.

Mary was not alive when her only son killed himself.  She had died on 16 Apr 1892 at the age of 50.  Her cause of death was the dreaded “consumption of the lungs.”  That was such a common cause of death back at that time.  Could her influence have changed the outcome for her son, Gordon?

Here is the entry on the death register for Mary J. Flower

Mary & David are buried together at Cressey Cemetery in Prairieville, Barry, Michigan.  You may visit Mary’s memorial here #17590528.

I always think about the photos that were probably taken of our ancestors.  The invention of the camera encouraged most people to have at least one photo taken during their lifetime.  I sure wish we could find all of them.

If you are connected to this family or have any information to share, I’d enjoy hearing from you.  If you have any corrections to this information, I’d welcome your input.

HIDDEN GEMS IN NEWSPAPERS - I HIT THE JACKPOT ON THIS WEBSITE