There is no shortage of ancestors to research, on my maternal side.  In spite of having 3 pretty big brick walls, I still find plenty of family to research.

Today I will focus on my 2nd great-granduncle and aunt, Richard Gillespie and Eliza Jane Patterson.

Richard Gillespie was the 8th of 9 sons born to Thomas Gillespie and Susannah Barrowcliff of England.  Richard was baptized on 28 May 1835 in the parish of Tiverton, County of Devon, England.  His baptismal record gives his date of birth as 7 May 1835.  Both of Richard’s parents are named on the baptismal/birth record and his father’s occupation is Cotton Spinner. 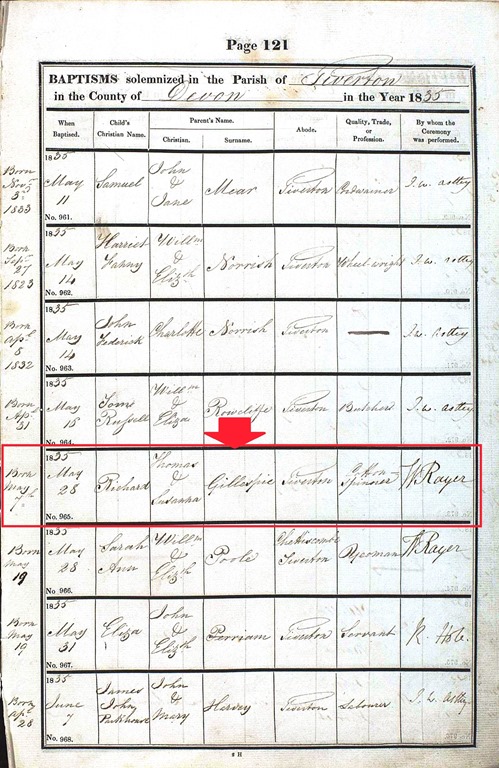 Richard & married Eliza Jane Patterson on 5 Nov 1854 in North Petherton, Somerset, England.  I located a record and image of their marriage record on Ancesty.com.

Here is the image and transcription.

I’ve learned a little about Eliza’s family while conducting research for this blog post.  Her father was George Patterson (abt 1790-1856), he is listed as a Mariner in the 1851 census.  This may be why he is not with his wife and children in the 1841 census.  Was he out to sea?  That seems a likely conclusion.  Eliza’s mother was Eleanor Bowden (1836-37-Oct 1910).  NOTE:  My maternal grandmother’s name was Florence Lee Nora Bowden.  I have not come across any other Bowden’s in my family lineage.  I have been unable to learn who my great grandfather, Robert Lee Bowden’s parents were.  Wouldn’t it be interesting if I someday learned that his Bowden family was connected to Eliza’s mother’s family?

Richard worked as an Iron Fitter or Eng. Fitter in the five census records in which he is enumerated.  I looked up the definition for Iron Fitter and the closest I could come was “fitter.”  Someone who adjusts machines.

I wonder what the wages were for such an occupation?  I notice that Eliza didn’t have an occupation listed on any of the census records.  Many women worked in England in the 19th century.  They worked in factories or as seamstresses or laundresses.  So, it would seem that Richard made enough of a living that Eliza could stay at home.

As far as the children of Richard & Eliza, I have found minimal records for them.  William married Emily Jane Collard (1864-1945) on 24 Dec 1881 and they had 8 children.  William was 67 years old when he died of Influenza and bronchial asthma.
I have found no record of either Sarah or Susan marrying.  In the 1891 census Sarah, age 28 is living with her parents, Richard & Eliza and there is a one month old child, Beatrice, listed with her on the census.  Is this her child?  The child’s last name is given as Gillespie.  Did Sarah not marry?  That’s the last record I can locate for Sarah.

As for Susan I last find what I believe to be her, working as a servant in the Toogle household in 1891.

If you are connected with this family, I’d love to hear from you.  Maybe you have information on Sarah & Susan?  Perhaps a photo of someone in the family?  Are we cousins?

OTHER POSTS ABOUT THE GILLESPIE FAMILY