100 YEAR ANNIVERSARY OF THE SPANISH INFLUENZA ~ An estimated 50 Million died worldwide–How many in my own family?

2020 - Let us all remember that we aren't the first generation to go through a pandemic, and we won't be the last.  I encourage everyone to stay safe and take proper precautions.  I pray we all can get through this quickly.  In this post from 2018 I wrote about the 1918 influenza and it's affect on the world and my own ancestors.

A flu that killed how many people? Yes, you read the headline correctly.  One hundred years ago, the Influenza epidemic of 1918 took more lives than the dreaded Bubonic Plague of the 1340’s.
There’s no lack of online information about this epidemic.  I think most of us, as genealogists, are very aware of it.  However, I don’t hear it talked about much in the news media.  When I mention it to non genealogists they usually say “what flu epidemic in 1918?”
I’m going to give you statistics from my own family file in a minute.  But, before I do that here are some other statistics.
It even affected my favorite sport’s playoff that year.  The Stanley Cup series was postponed due to players being ill. 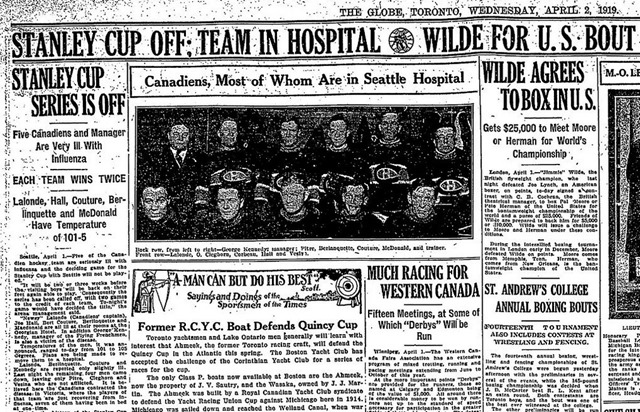 A sample of some of the influenza articles across the country.

Questions:
What was the Spanish flu caused by?
Spanish flu. The Spanish Flu Pandemic, also known as La Grippe Espagnole, or La Pesadilla, was an unusually severe and deadly strain of avian influenza, a viral infectious disease, that killed some 50 million to 100 million people worldwide over about a year in 1918 and 1919 [1]. Spanish flu - ScienceDaily
https://www.sciencedaily.com/terms/spanish_flu.htm
What started the Spanish flu?
The virus which was responsible for the first benign wave of the Spanish Influenza in the spring of 1918, and which was to become extremely virulent by the end of the summer of 1918, was inextricably associated with the soldiers who fought during the First World War.Nov 30, 2009
Origins of the Spanish Influenza pandemic (1918–1920) and its ...https://www.ncbi.nlm.nih.gov/pmc/articles/PMC2805838/
How did the Spanish Flu end?
Flu Pandemic Comes to an End. By the summer of 1919, the flu pandemic came to an end, as those that were infected either died or developed immunity. ... Since 1918, there have been several other influenza pandemics, although none as deadly.
1918 Flu Pandemic - Facts & Summary - HISTORY.com  www.history.com/topics/1918-flu-pandemic
So let’s talk about my own family.  I used Legacy 9 to create a list of all the people in my database who died in 1918.  There were 27 for whom I have a death date in that year.  Of the 27 people, I do have causes of death for most of them.  I have FOUR confirmed deaths from the Influenza and one probable.  That’s approximately 15% of the deaths that year caused by this flu.
The people in my family who were taken by this epidemic were:
- Mary Campbell HART, age 91, died 7 May 1918 in Port Huron, St. Clair, Michigan.  Mary is the wife of my half 2nd great granduncle.
- * William H. HART, age 71, died 1 Mar 1918 in Clyde, St. Clair, Michigan.  He is the son of the above Mary Campbell Hart.  He is my half 1st cousin 3 times removed.
- Lynn HART, age 18, died 30 Oct 1918 in Woodhull Shiawassee, Michigan.  Grand nephew of the above Mary Campbell Hart.  He is my half 2nd cousin twice removed.
- William B. CURRY, Jr., age 26, died 14 Oct 1918, while serving his country in the Army as a Sgt. at Camp Zachary Taylor in Louiseville, Kentucky.  He is the husband of my grandaunt.
- Charles Henry FENNER, age 59, died 27 Oct 1918 in Lima, Allen, Ohio.  He is the husband of my great grandaunt.
* The death of William H. Hart was listed as pneumonia, but that could have followed influenza, as I have read.  It would seem that many in the Hart family were sick with influenza based on this newspaper article about the death of Lynn Hart. 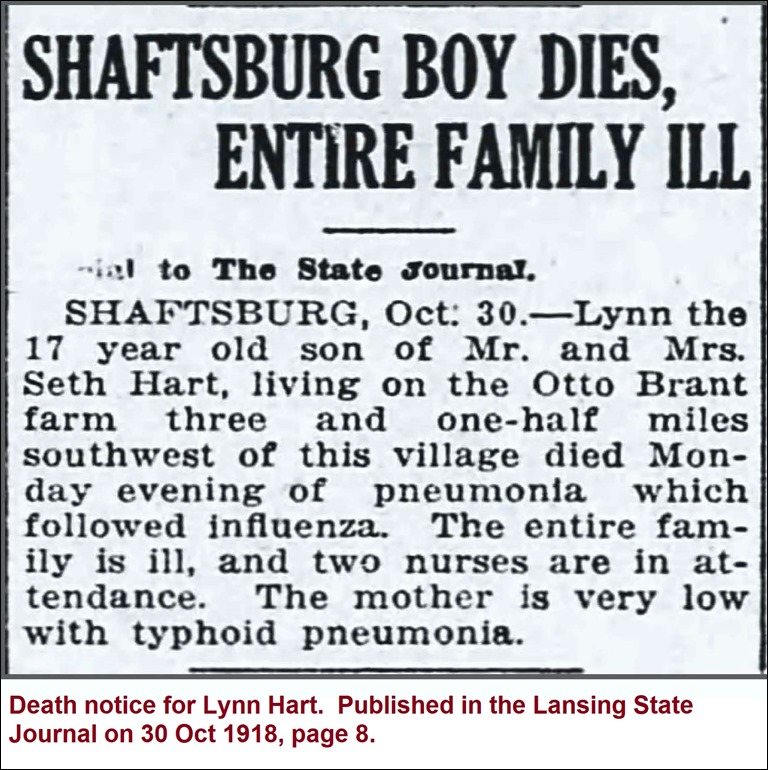 Let’s talk about your family now.
Have you ever taken a look at those in your family who died in 1918?
How many died from the Spanish Influenza or something related to it?
I’d like to hear about it either in a comment or on your own blog.
Following are some websites that I found with articles and one very good documentary I watched on PBS.
http://www.history.com/topics/1918-flu-pandemic
https://virus.stanford.edu/uda/
https://en.wikipedia.org/wiki/1918_flu_pandemic
Program on PBS about the 1918 Flu Epidemic
Happy hunting,
Michigan Girl