FOLLOW UP FRIDAY ~ WHAT HAPPENED TO THE YOUNG WIDOW OF GORDON FLOWER AFTER HIS SUICIDE?

At that time I had very little information about 16 year old Lovina.  However, I wanted to follow up and find out what became of this young lady who suffered such a traumatic event at a young age.

I found a birth record for Lovina.  The date and place match with other information I have located for her.

It was in October 1896 that Lovina married Gordon Flower.  There are no known children born to the couple. The marriage only lasted 3 days prior to his death, however, I was thinking, perhaps they had gotten married because she was pregnant.  Gordon was 16 years older than Lovina.

Lovina didn’t wait long to marry again.  I located a marriage record for her to James K. Verrill on 10 Feb 1897 in Hastings, Barry, Michigan, only four months after Gordon’s death.

She is listed as being 18 years old and James as being 30.  Fortunately, I looked under his name and not hers, as the record is written Suveara Flower nee McNinch.  And that’s just how the indexer transcribed it.

Lovina & her husband James can be found in the 1900 census in Prairieville, Barry, Michigan with their one year old son, Miles.  James is working as a Sawyer and they own their home.   Of note is that Lovina’s previous father-in-law David Flower and a few of his children are living nearby.  There is another Flower family on this page (Homer & Mary). I don’t yet know how or if they may be connected to David Flower. 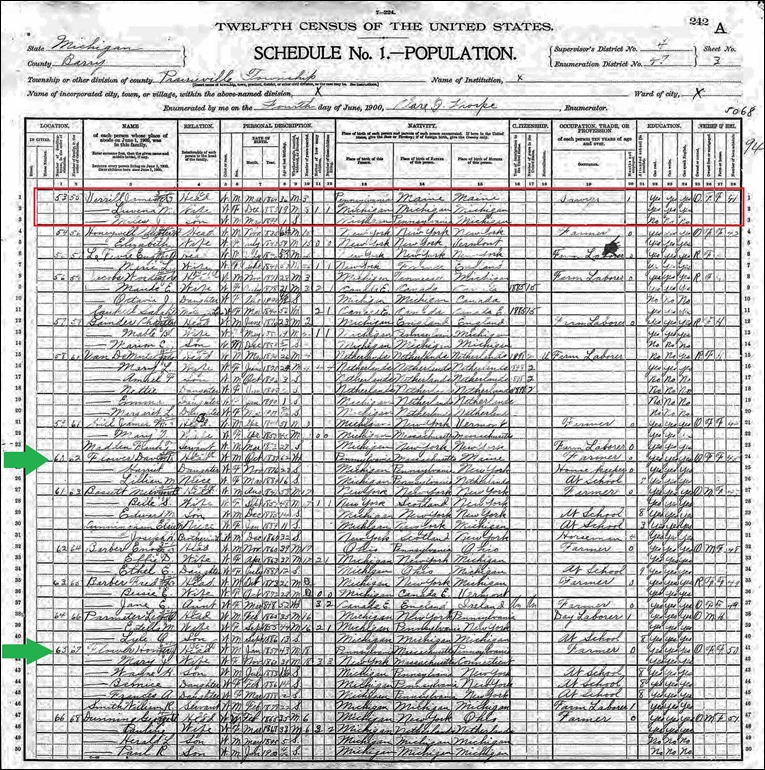 The next record I find for Lovina is the 1910 census, she is 29 yrs. old.  She and James are still living in Prairieville, Barry, Michigan.  Only now they have added 3 daughters and a second son to their family. James is working as a house painter, and they still own their home.


Lovina is next found in the 1913 Kalamazoo City Directory listing with James.  He is working as a Watchman and they live on the east side of Douglas Ave 2 north of city limits.

As I continued searching for records for Lovina, I sadly, located her death certificate from 24 May 1913.  At the age of 32 Lovina died, during or after some sort of surgical procedure.  The informant on the death certificate is her husband, James and her parents names are correct.  Their is an error in the spelling of the last name as Berrill instead of Verrill. 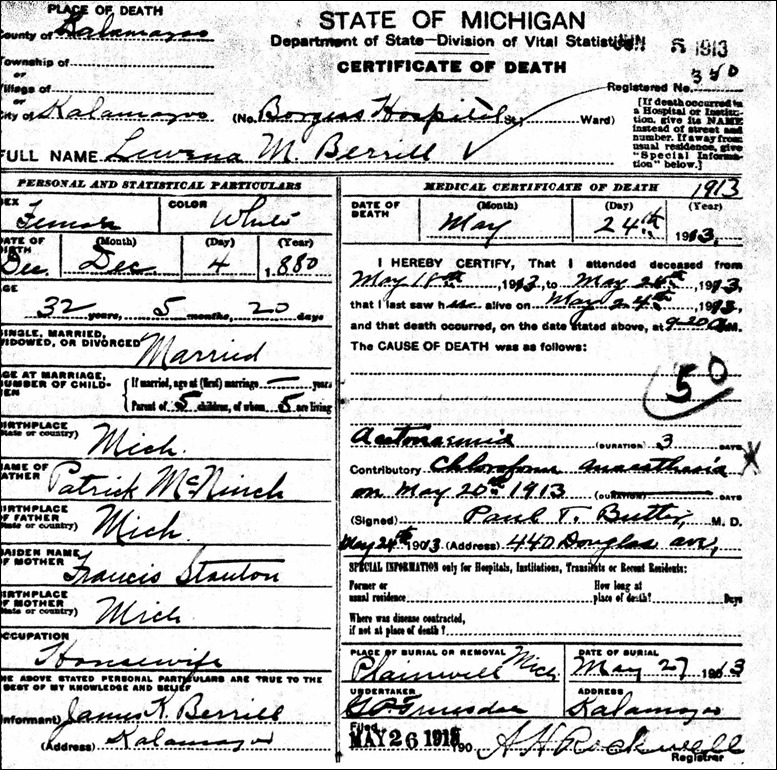 From there I was able to locate her memorial on FindAGrave #165353953.  She and James are buried together.  James never remarried and died in 1956 at the age of 92, leaving a legacy of 11 grandchildren, 17 great grandchildren and 1 great great grandchild.  On his death certificate it gives his wife’s name as Lovina.  He lived 43 years after her death without remarrying.  It was quite common for men to remarry after the death of a wife, especially with young children.  Their 5 children ranged in age from 5 to14 at the time of Lovina’s death.

I have not located an obituary for Lovina, but did find the following on her FindAGrave memorial.  This would appear to have come from an obituary.  I have checked both newspapers.com and genealogy bank with no success.

MRS. LUVENA VERRILL. Mrs. Luvena Verrill, aged 32 years, died this morning at the Borgess hospital following an operation for appendicitis. Previous to the operation Mrs. Verrlll had been confined to her home on Douglas avenue for a period of two weeks. She is survived by her parents, Mr. and Mrs. Patrick McNinth of Plainwell, her husband, three daughters, Frances, Martha and Luvera, two sons, Miles and Leslie, one brother, William McNinth of Alamo, and two sisters, Mrs. Ella Mills of Battle Creek and Miss Minnie McNinth of Plainwell. The funeral will be held Monday morning at 10 o'clock from the Truesdale chapel and burial will take place at the Plainwell cemetery. Kalamazoo Telegraph-Press May 24, 1913
Married Gordon W. Flower 5 Oct 1896 Hastings, Barry, Michigan

I would be very interested in exchanging information with anyone related to Lovina and her family.  Does someone out there have a photo of Lovina or James or their children?  Please contact me if you are connected to this family.


ALL RIGHTS RESERVED.  NO USE WITHOUT PERMISSION
Posted by Diane Gould Hall at 1:29 PM