William Davies is my sister-in-law’s 2nd great grandfather.  Born in Kilbarchan, Renfewshire, Scotland he married Jane Cameron on 7 Apr 1849 in his home town.

William first married Jane Cameron on 7 Apr 1849 in Kilbarchan, Renfew, Scotland and they had two known daughters, Frances, born about 1852 and Mary Jane (9 Mar 1863-21 Jun 1863).  Because of the large gap between the births of Frances & Mary Jane, there may well be other children that were born to this couple.

Here is there marriage record from Scotland. 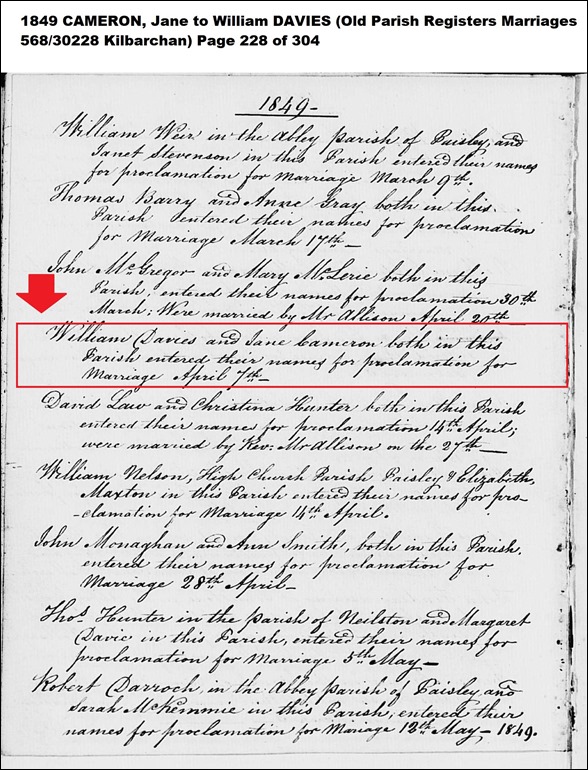 William and his wife Jane immigrated to the United States between 1849 and 1855.

Sadly, William’s wife, Jane died 5 Apr 1863, age 36 and his infant daughter, Mary Jane just a couple of months later.  You may visit Jane and Mary Jane’s memorial on FindAGrave here – Jane #69470171 and Mary Jane #147481252.  They are buried at Congressional Cemetery in Washington, D.C. Their names appear on the same headstone. I wonder if childbirth played a roll in Jane’s death?  It so often did back then.

William remained in Washington, D.C. and can be found in the 1900 census in a household with 6 of his children.

A record of William’s death can be found on familysearch.org, however, the image is not available unless you are at the Family History Library or an FHC location.  I will be at the FHL later this month and will locate this film and get a copy of the image to add to my Legacy database.

If you are related to this family, I’d love to hear from you.  Should you have any additional information or correction, please contact me.