George Steven Thorp is my great granduncle on my father’s side.  He is the son of Horace Henry Thorp and Catherine C. Dorsey. He was one of 10 children born to this couple.  He was their 9th child.  My great grandmother Mae Eve Thorp was his older sister.

George and his wife Mary (Mariett) Ainsworth are buried at Grand Lawn Cemetery in Detroit, Wayne, Michigan.  They are located in Section 8, Lot 108. He is in grave 3 and has a headstone, Mary is next to him, in grave 4, but has no headstone.

George married Mary on 23 Nov 1904 in Detroit, Michigan. Here is their marriage record. 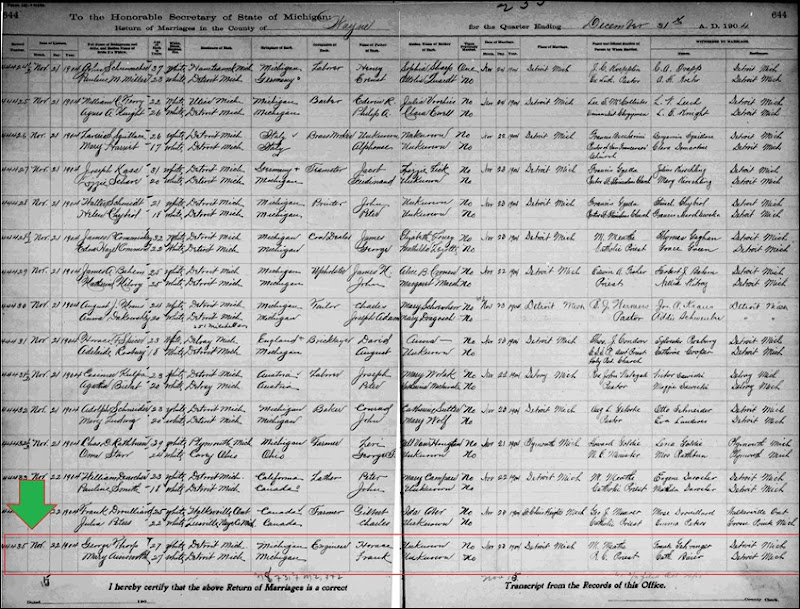 George and Mary had two children, a son, James H. Thorp and a daughter, Edith Agnes Thorp.  The son, James died in an accidental drowning at age 18 on 27 Jun 1926.  Edith married, had children and lived into her 80’s.

George died in his home town of Detroit, Michigan on 8 Sep 1933 at age 57 of lung cancer.  I wonder if he smoked, or did his occupation somehow contribute to the carcinoma of his lungs?  We know a lot more about those things today than they did back then.

If you are related to anyone mentioned here I’d love to hear from you. I need to connect with more of my Thorp cousins.

TOMBSTONE TUESDAY - Who in my family is buried at Grand Lawn Cemetery in Detroit, Michigan?

MYSTERY MONDAY - WHO'S YOUR DADDY? Brick Walls Post #4 - Catherine Dorsey Thorp about 1842-1898 (This post is about George’s mother)