HIDDEN GEMS IN NEWSPAPERS - I HIT THE JACKPOT ON THIS WEBSITE 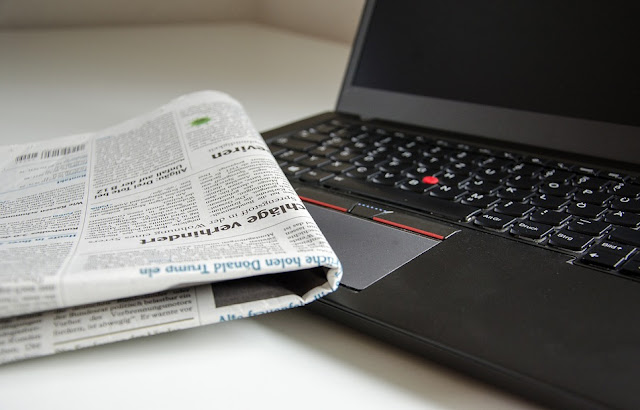 OLD FULTON NY POSTCARDS  This is a website I heard about via a Facebook group I belong to called New York Genealogy.  The first thing I thought was “well, I don’t have any ancestors from Fulton County, so why would this site be helpful to me?”  But…I kept reading about people finding all sorts of records from other counties in New York.  This website contains thousands of newspapers from New York and other areas and many other records.


As most of us are well aware, New York is one of the black holes for genealogy.  At least in some counties.  We will take all the help we can get in finding records.

I’ve tried using this site on a couple of occasions, but had no luck in finding any records.  Today I decided to give it another try.  I can usually figure things out when it comes to websites and this one should be no different.  However frustrating my previous attempts may have been.

Over on the left hand side you see the search screen.  It doesn’t seem complicated, so why didn’t I have any luck on my previous tries?
NOTE:  I think there are times when we are researching that we don’t necessarily have the time or patience to learn something new.  At least I have found this to be true with me.  Then I go back another time and everything works just fine.

So what is the secret to getting results here?  There are several option in the drop down menu below the search box.  They are: boolean, all of the words, any of the words and exact phrase.

Then there are the other choices: Fuzzy searching, Phonic searching etc.  You can see them in the screenshot above.

I decided to use “boolean” and “fuzzy.” 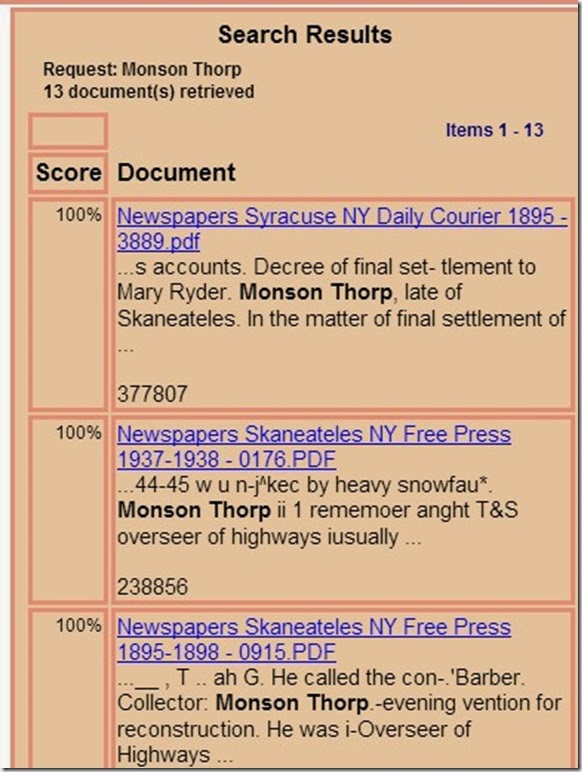 My hopes were high since I see Skaneateles mentioned in the first 3 hits.  And,  it’s not like Monson is a common name. The dates mentioned in most of the 13 hits was also within the correct time to be my Monson.

I was rewarded in spades.  Eleven of the thirteen articles were about my Monson.  Everything from him being listed as to an Overseer of Highways in 1841 to being a member of the Horse Thief Society in 1854 to the settlement of his accounts after his death.

I saved every article in PDF format and then converted them to JPG as that’s my preferred method for adding them to my Legacy database.  I made sure I labeled them all with my standard labeling practices so I could easily find each separate article.

I went on to search other members of my THORP family and was handsomely rewarded with marriage dates and death and burial dates in various articles.

IS THERE ANYTHING MORE THAT WE CAN ASK AS GENEALOGISTS?

The TWO BIGGEST FINDS in this group were ……

A small little piece in the paper about Monson Thorp visiting his son Stephen Thorp who was wounded at Gettysberg.  I previously knew that Stephen had served in the Civil War, but I did not know he was at Gettysberg.

How many more records about Stephen will I be able to locate based on this tiny article?

An article about the Golden Wedding Anniversary of Monson & Lany Thorp.  This article contained exact places & dates that I did not previously have and mentioned Lany’s maiden name.   I believed her maiden name was Cooper, based on other documents, but it was sure nice to see it in this article.

WHAT GENEALOGIST WOULDN’T BE DOING THE “HAPPY DANCE” AFTER FINDING ALL THESE GEMS?

I encourage you to keep exploring new sites as they become available AND, go back to the sites in which you previously had little or no luck.  You never know what you will find.