THE CIVIL WAR–HOW OUR COUNTRY DEALT WITH THE AFTERMATH

This year on April 9th we will remember the 150th anniversary of the end of the Civil War.  The surrender took place at Appomattox Courthouse in Virginia.

Last year I wrote a post about the Civil War Dead and how we got our national cemeteries.  If you’ve never thought about how our country took care of 620,000 dead soldiers, then this will help explain it.  Think of it.  All those fathers, sons, brothers, grandfathers, uncles, cousins and friends.


HOW DID OUR NATION COPE WITH ALL THE CARNAGE LEFT BY THIS WAR? 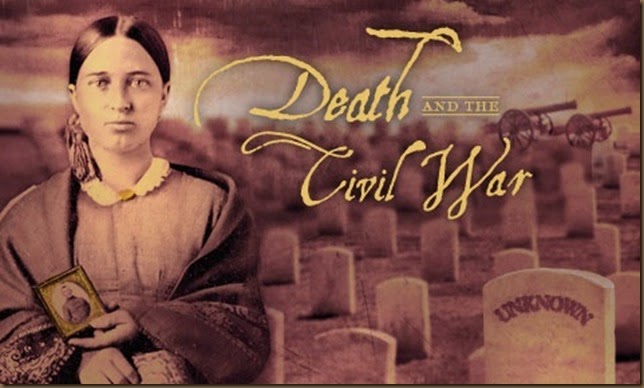 May is a month where we honor those who have paid the ultimate sacrifice fighting for our rights and freedom.

I wanted to share the information about this documentary with you.  I just watched it this morning, as I had recorded it several days ago.  Here is a link to the site:
The American Experience - Death and the Civil War

This was such an interesting study of how we came to have National Cemeteries in America.  So many of our citizens died on our own soil during this epic struggle that there was chaos over what to do with all the bodies.
These were just some of the questions raised during this long and bloody battle.

How many soldiers did we lose in the Civil War?

Here is a comparison chart I found online with numbers from all the wars since our country began.  None of these numbers are 100% exact as new casualties are always being discovered.  However, you’ll notice that there were approximately 620,000 deaths during the Civil War.  And, all the other wars combined total approximately 644,000.  So, almost as many during the one conflict as all the others combined. 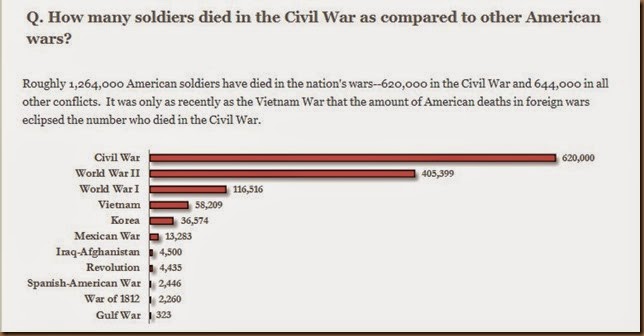 Our first National cemeteries were established in 1862, as a direct result of the deaths during the Civil War.  Here is a link to a site that gives the dates of the establishment & first burial of all our National cemeteries.
Dept. of Veterans Affairs - National Cemetery Administration 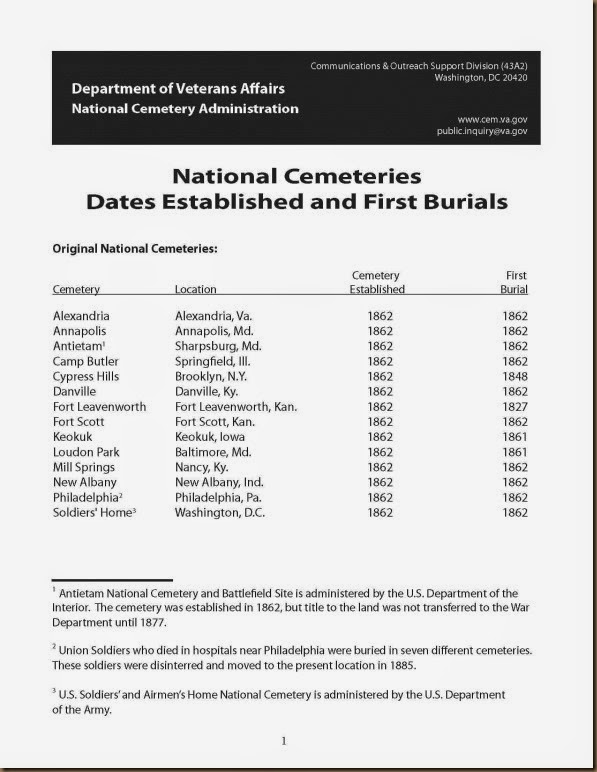 My husband has many family members who are buried at Fort Rosecrans National Cemetery here in San Diego, California.  Among them are his Mom, Dad, Uncles, Aunt and Cousin.

Here are some photos, courtesy of the Library of Congress.

WE’VE GONE FROM THIS:
TO THIS:
AND FINALLY TO THIS:


Do you have family members buried in our National cemeteries?  I can’t imagine that there is anyone reading this who doesn’t.

Watching this documentary was very educational for me.  Thanks again to PBS for their wonderful programming.

And, no words can thank any of our military men and women and their families enough for their service and sacrifices.

OTHER POSTS THAT YOU MAY BE OF INTEREST
Cemetery Records - What can they tell you?  How do you use them?

God Bless All Who Have Served and Sacrificed.

Copyright ©  2015   Diane Gould Hall
ALL RIGHTS RESERVED.  NO USE WITHOUT PERMISSION