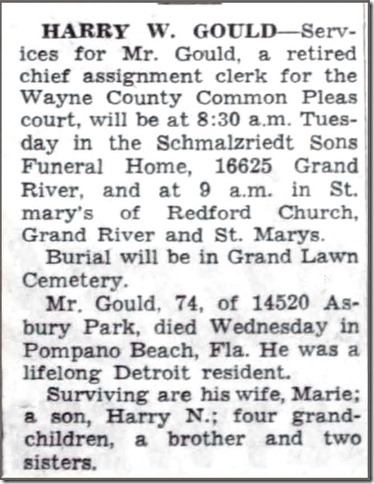 I was only 9 yrs. old when my paternal grandfather died.  We were living in Pompano Beach, Florida.  My grandparents, Harry & Marie lived in a house on the next block from ours.  I was at their home a lot. Prior to moving to Florida we had all lived in Detroit, Michigan.

I loved my grandpa.  He was always very kind.  I remember that he smoked both cigarettes and cigars.  I have so many questions I’d like to ask him.  But, who asks those questions when they're nine?

Here’s Harry in some undated photos, as a young man.


On June 6, 1912, Harry married Marie Wallace Lindsay.  They were married in Windsor, Essex, Ontario, Canada. You can read about my search for their marriage record here WEDDING WEDNESDAY - Where were they married?

I ended up spending most of my working career working for municipalities.  First the City of San Diego, then the City of Poway, 29 years in total.  Must be in my blood.

Harry and Marie enjoyed swimming.  They had a cottage at Lake Huron in Port Huron, Michigan.  I have many family photos of them at that lake and several other lakes.  I remember going to cottage when I was a little girl.

Harry died just two years short of my grandparents 50th wedding anniversary.  I know my grandma Marie missed him terribly.  She lived with us for a few years prior to her death in 1970.

I have dozens more photos of my grandparents, which I cherish.

My grandfather is buried at Grand Lawn Cemetery in Detroit, Michigan, along with his beloved wife, Marie and other family members.  I visit them every time I go back to Detroit.


I love you Grandpa and will always miss you.