This letter was contained in his Civil War pension file.  I’ve never seen any letters written during war time, from any of my ancestors.  To say this was a big find, is to put it mildly.

NOTE: The stationary I've seen, that was used in the past, was two sided, which was probably then folded one inside the other.  This is why the pages seem out of order to us.

The letter shown was written on August 13, 1862 from Iuka, Mississippi.  I first thought the location as Juka, but my research showed it to be Iuka (I’ve used a different font so you can tell the first letter is an I).

Iuka is located in northern Mississippi near the border of Tennessee.  Here is a map of Iuka during the Civil War, September 1862 (available via public domain). 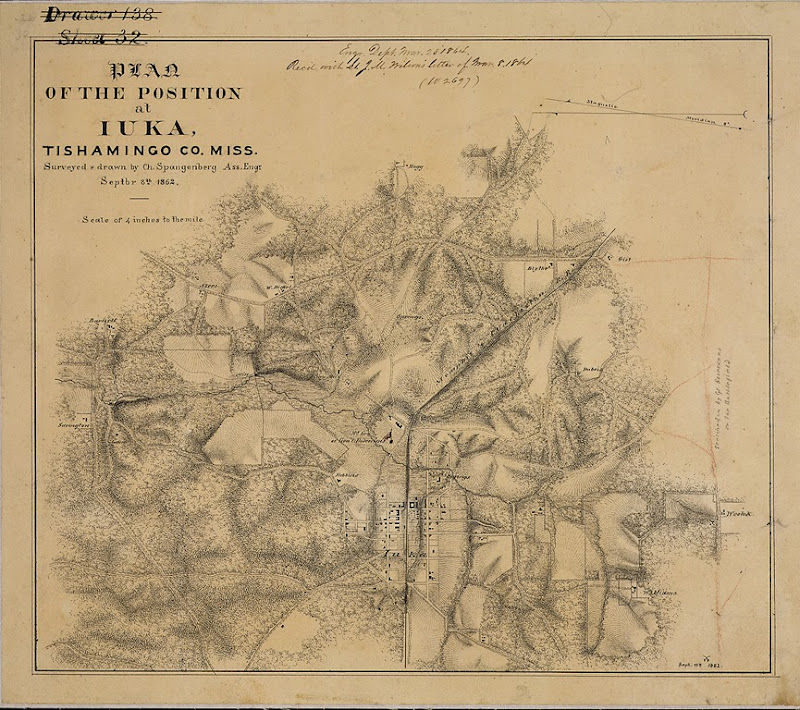 To read about the Civil War Battle of Iuka please click here.

I made the following transcription of Private Gillen’s letter.  I’ve left spelling and punctuation as it was in the letter and transcribed it to the best of my ability.

Aug 13th 62
In Camp at Iuka Miss
Dear Sister
I recd yours & Mothers letters yesterday morning & I will answer yours now and hers in a few days  I am well at present we have changed our camp we are now on the Memphis & Charleston RR at Iuka this is a sort of watering place there is several Sulphur springs 4 of which are all fixed up in stile I tell you I like this camp far better than I did any other camp that we have been in since we have been in this state  I hope we will stay here till it gets cool weather there is plenty of good water & a __branch to go bathing in  a train that is the cars pass here one from each way concequental we get our mail regular which is not often the case with us soldiers we were on a scout last week we started from our old camp on the 4th & O but it was hot in the 3 reg there was several sunstruck 3 of which died well after that we did all of our marching in the night & layed over during the day we were gone 4 days we broke up one reb camp took 11 prisoners 8 or 10 horses & destroyed a cotton factory well did not exactly destroyed it but put it our of runing order we would have got the whole pile of rebs if it had not been for a lousy citizen he give them notice of our aproach the concequence was they were ready to __ as soon as we got to them ther right wing of our reg was in the advance & the left was in the rear guard consequence they got a few shots at them while we did not get a ___ well there was not much ___ing at the cowardly pups as soon as they commenced to retreat the dog was dead for they was all cav & we infantry well as soon as the rebs left we started for camp & we got to within 8 miles of it when we got orders to march to this place well there was no help for it run out ___& got here the next day making in all 6 days that we had been runing around it was the hardest 6 days march that I ever done in all of my marching it hurt me the most it was not the walking but the loss of sleep for we would be going all night & it was so warm in the day time that a man could not sleep to do ___
Ella I am going to get my pay to day or tomorrow & I will send some of it home & I want you to get your likeness taken & send it to me, don’t get it taken on the same kind of stuff as __unless you have it put in a case I want to see if you grow any I expect you are prety near as large as lib are you not  I am as black as a negro very near I tell you this hot sun will take the white out of a person in short notice I am on guard to day & will have to go & stand to hour now in a few minutes well I believe I written about all I can think about at the present time I want you to write as soon as you get this & give me all of the news I know you folks dont write half of the news sow just sit down and write a few lines slow I dont feel like writing to day & then quit
yours ___John Gillen Jr

Private Gillen was killed at the Battle of Stones River, Mississippi just a little over 4 months after writing this letter to his sister.

Things I thought of as I reviewed this letter several times.
There’s a lot to think about when researching our family history.  They have never been just names and dates to me.  The longer I research the more my ancestors come alive.  They live in my mind and in my heart every day.

Do you have any letters from your ancestors, written during wartime? I’d love to hear about them.