Today’s post is about Private John Gillen, age 21, who was killed in action on 31 Dec 1862 at Stones River, Tennessee.  He was a Union soldier.

Here is the family group sheet.

Private Gillen was the second oldest son.  He was one of three sons to serve in the Union Army during the Civil War.  Both his brothers, Isaac and Martin also served. Those brothers survived the war. However, neither lived past their early 40’s.

Private Gillen was born about 1841 in Ohio.  His family was farming in Union, Lawrence, Ohio in the 1850 census.  By the 1860 census the family had moved to Champaign, Illinois and his father was farming and had real estate worth $600. The family is found in Champaign in the 1870 and 1880 census.  John Gillen (Sr) dies in November 1880.  By the time of the 1900 census Private Gillen’s mother Nancy is living in a home at 420 E. Clark St., in Champaign.  Her daughter, Ella is living with her.  The home is owned and free of a mortgage.

Here is a map and a current street view of E. Clark St. today.


John’s mother, Nancy Miller Gillen, applied for his pension on 22 Apr 1882, as indicated on this pension index card. I ordered the pension file, my first for a soldier killed in action.  This was the third Civil War pension file I have received, and all of them are full of wonderful genealogical information.

NOTE:  Rather than going directly through NARA for my orders, I use the services of Deidre Denton.  You may access her services via http://twistedtwigsgenealogy.com/

I have no affiliation nor do I receive any remuneration from any referrals.  Just letting you know how I got copies of the pension files.

Through the various statements in this pension file I learned that the young John Gillen was responsible for helping to support his family, including sending a large portion of his soldier pay home.  It seems his father, the older John Gillen, was in feeble health and not able to earn a good enough living to support his family.  Once the older John died in 1880, Nancy had no means of support and applied for the pension from her son’s service and death in the war. 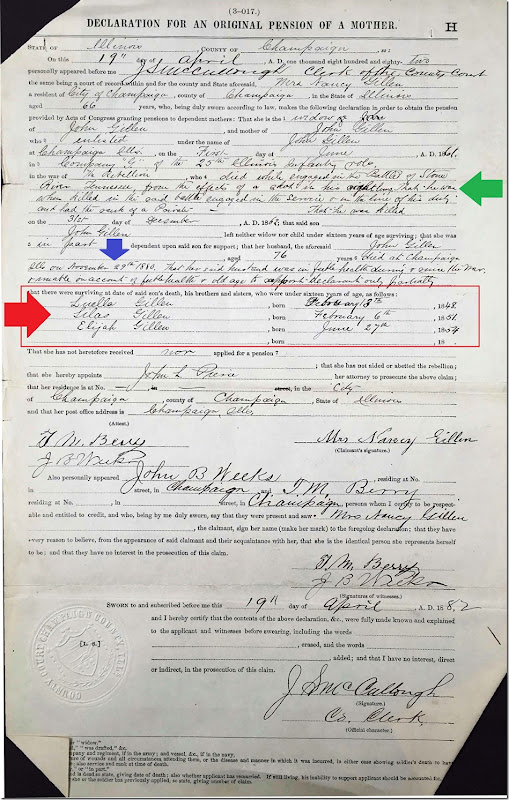 I would certainly say that on that one page alone we have some wonderful genealogical information.  (The entire pension file is 63 pages) The form is signed by Nancy Gillen so we can surmise she is the one who provided the information.  Do we still need to verify those dates?  Yes.

Two of the surprises contained in this pension file are letters written by Private John Gillen to his sister, Ella (Louella Gillen 1848-1942).  I will be transcribing those letters in another post so as not to make this post exorbitantly long.

Private John Gillen is buried at Stones River National Cemetery in Murfreesboro, Rutherford, Tennesse.  There are more than 6,000 Union soldiers buried at this cemetery.  His FindAGrave memorial is #68723997.

There is quite a lot written about the Battle at Stones River, which took place from December 31, 1862 to January 2, 1863.  The casualty percentage at this battle was second only to Gettysburg in all major engagements during the Civil War.

I hope one day I will find a photo of young Private Gillen, as he talks about family photos in his letters to his sister.  In the meantime, I hope that I’ve honored his memory and his service to our country.

What I Learned from One Single Page of a Civil War Pension File - 1864 - Edith E. Thorp