DID YOUR GRANDMOTHER VOTE? ~ How old were your female ancestors when the 19th amendment passed?

This process has gone on as long as we have been a free country.

However, it wasn’t until the ratification of the 19th amendment on August 18, 1920 that every woman was granted the right to vote.

Here are some sites you can look at to learn the history of the Women’s Suffrange Movement in the United States.

Origins of Women's Suffrage in the U.S.

Nineteenth Amendment to the United States Constitution from Wikipedia

19th Amendment to the U.S. Constitution:  Women’s Right to Vote

Some states allowed women to vote prior to the passing of the amendment.  I’m proud to say that my home state of Michigan was one of them.  Michigan allowed the women to vote in 1919. 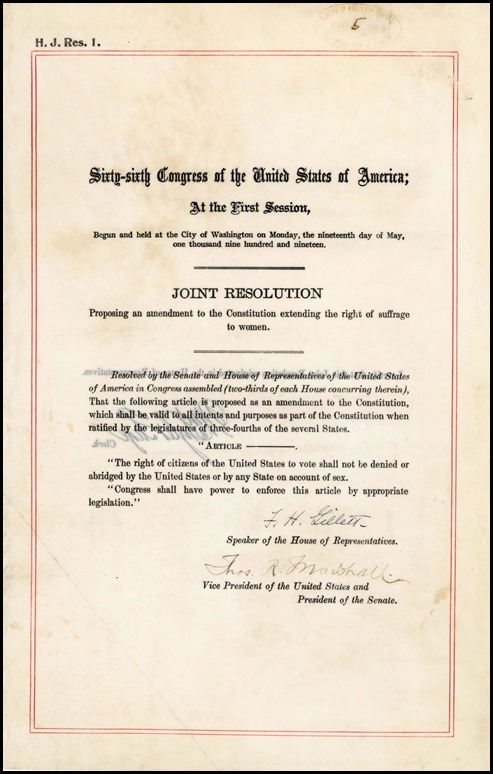 “The right of citizens of the United States to vote shall not be denied or abridged by the Unites States or by any State on account of sex.”

Checking my female ancestors - which women lived to see the passing of the 19th amendment?

How old were they when the amendment was passed?

The only two women from this list that I knew, were my grandmothers, Marie Gould and Florence Milne.  Marie died when I was 20 and Florence when I was 36.  I never remember discussing politics with them.

Checking my husband’s female ancestors - which women lived to see the passing of the 19th amendment?

My husband would have been alive during the lifetime of all the ladies, except Cora.  However, he was only 3 when his grandmother, Daisy died. Bertha lived in New York and died when my husband was only 7 months old.  And he says he never remembers speaking to his grandmother Freada or his mother, Dorothy, about politics.

I wish I knew the answers to my questions.  I hope that every one of these women took advantage of their right to vote.  There was a Presidential election held in November 1920.  This would have been the first time women in ALL 48 states could vote.  In the 1916 Presidential election, "about" 30 states allowed women to vote.

I’ll be voting tomorrow, as I have in every election since I turned voting age, which for me, was 21.

Which one of your female ancestors would have been alive to see the 19th amendment pass?

Did you ever talk politics with them?  If so, what were their views?

Get out and vote!