FAMILY "RECIPE" FRIDAY - HOW TO KEEP HAIR CURLED BACK IN 1906


My grandmother, Florence BOWDEN MILNE left us a spiral bound notebook, which I refer to has her journal.  The entire notebook is written in her hand and was begun about the time of her marriage to my grandfather, Joseph, in 1906.  In it she left a treasure chest of family information and wonderful clues to life back in the early 1900's. 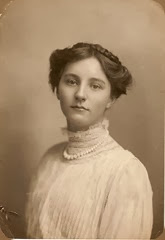 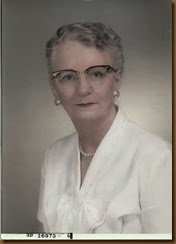 On the left, my Grandmother at age 18 - when she began her notebook and on the right when she was about 60 years old.
A recipe doesn't necessarily have to be something that is for cooking.  With that in mind I will be sharing various types of recipes, both for cooking and for other things from my grandmother's journal.  These items range from recipes for shampoo to how to keep hair curled (featured today), to curling fluids for your hair,  cures for blackheads or acne, chocolate fudge and how to tell if your wood-burning stove is the correct temperature.  You'll see them all here as the weeks continue.  So, please come back often. 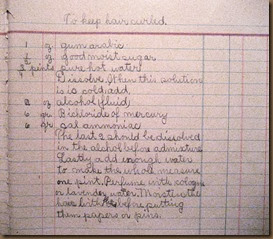 Please enlarge the picture above, by double clicking on it,  if you want to see it more clearly

This “recipe” or formula calls for Gum Arabic, Bichloride of Mercury and Sal Ammoniac.


“GUM ARABIC also known as acacia gum, chaar gund, char goond, or meska, is a natural gum made of hardened sap taken from two species of the acacia tree; Senegalia senegal and Vachellia seyal. The gum is harvested commercially from wild trees throughout the Sahel from Senegal to Somalia, although it has been historically cultivated in Arabia and West Asia.
Gum arabic is a complex mixture of glycoproteins and polysaccharides. It was historically the source of the sugars arabinose and ribose, both of which were first discovered and isolated from it, and are named after it.
Gum arabic is used primarily in the food industry as a stabilizer. It is edible and has E number E414. Gum arabic is a key ingredient in traditional lithography and is used in printing, paint production, glue, cosmetics and various industrial applications, including viscosity control in inks and in textile industries, although less expensive materials compete with it for many of these roles.
While gum arabic is now produced mostly throughout the African Sahel, it is still harvested and used in the Middle East. For example, Arab populations use the natural gum to make a chilled, sweetened, and flavored gelato-like dessert.”
You can find this description of Gum Arabic with much more information about it at GUM ARABIC on wikipedia.
BICHLORIDE OF “MERCURY or Mercury(II) chloride or mercuric chloride (archaically, corrosive sublimate) is the chemical compound of mercury and chlorine with the formula HgCl2. This white crystalline solid is a laboratory reagent and a molecular compound. Once used as a treatment for syphilis, it is no longer used for medicinal purposes because of mercury toxicity and the availability of superior treatments.”
You can find this description of Gum Arabic with much more information about it at BICHLORIDE OF MERCURY on wikipedia.
“SAL AMMONIAC is a rare mineral composed of ammonium chloride, NH4Cl. It forms colorless to white to yellow-brown crystals in the isometric-hexoctahedral class. It has very poor cleavage and a brittle to conchoidal fracture. It is quite soft, with a Mohs hardness of 1.5 to 2, and has a low specific gravity of 1.5. It is water-soluble. Sal ammoniac is also the archaic name for the chemical compound ammonium chloride. The Romans called the ammonium chloride deposits they collected from near the Temple of Jupiter Amun (Greek Ἄμμων Ammon) in ancient Libya 'sal ammoniacus' (salt of Amun) because of proximity to the nearby temple.[4] Salts of ammonia have been known from very early times; thus the term Hammoniacus sal appears in the writings of Pliny,[5] although it is not known whether the term is identical with the more modern sal-ammoniac.[6] In any case, this salt ultimately gave ammonia and ammonium compounds their name.
It typically forms as encrustations formed by sublimation around volcanic vents. It is found around volcanic fumaroles, guano deposits and burning coal seams. Associated minerals include sodium alum, native sulfur and other fumarole minerals. Notable occurrences include Tajikistan; Mt. Vesuvius, Italy; and Parícutin, Michoacan, Mexico.”
You can find this description of Gum Arabic with much more information about it at SAL AMMONIAC on wikipedia.


Many of the items used in my grandmother's recipes aren't even available to us any more.  But, what fun it is to look at them.
Have we ever thought of our ancestor's lives without all of our modern conveniences?  Even something as common as shampoo had to be made by hand. And we can use curling irons and hair spray today to keep our hair curled.
Can you find any old recipes from your family?