THE ASSASINATION OF A PRESIDENT 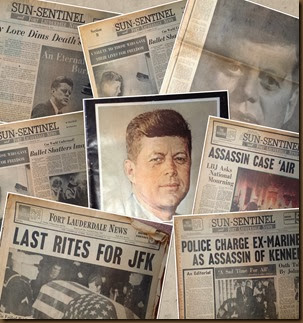 I was 13 yrs. old living with my parents & brother, Norm, in Pompano Beach, Florida.  I heard about the terrible event on the school bus, on my way home.  The bus was full of children.  As a teenager, I was well aware of who the President was and who my parents had voted for (it wasn’t President Kennedy).  Politics were discussed in our home and you can’t help but over hear the conversations.
All of the children on the school bus were SHOCKED and some began to cry.  I don’t think I cried then, but I certainly cried in the coming days.
The next three or four days aren’t very clear in my memory, except that we were glued to our television as the events unfolded.
I clearly remember watching the funeral procession with JFK’s casket and the rider less horse following behind.  I also remember seeing Caroline & John-John (as he was called by so many of us), and thinking how awful it would be to lose your Daddy.  Especially in such a horrible way.
How this changed our country?  I don’t really know.  There’s been so much speculation about “what if.”  But, this is how history unfolded and we can’t change a thing.  If only we could.
God Bless Caroline today, as she is the only surviving member of that little family foursome.
As a young girl I was interested in history (yes, even back then).  I saved all the newspapers and the Saturday Evening Post from those few days.  They are yellowed and dog eared and seldom removed from the paper bag I’ve kept them in for 50 years.  Today I will move them out the paper bag and into a more appropriate holder. I haven’t enhanced them at all as I believe that leaving them faded and yellowed best represents the 50 years that have passed since that horrible day. 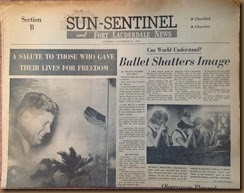 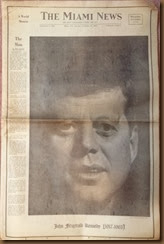 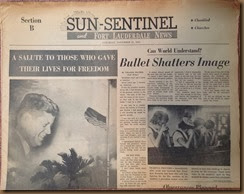 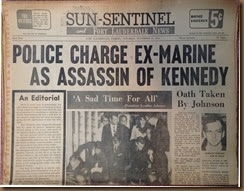 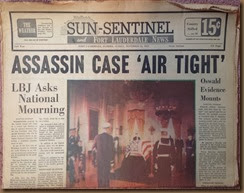 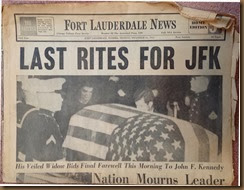 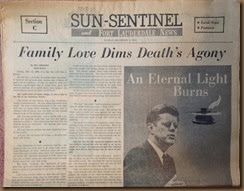 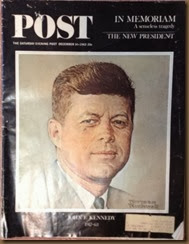 Email ThisBlogThis!Share to TwitterShare to FacebookShare to Pinterest
Labels: 1963, assassination of president kennedy, blog post for JFK, JFK, November 22, where were you