It has been a while since I’ve tried to locate more information on the first wife of my husband’s paternal Uncle, Robert Walton Hall, Sr.  My husband, Ron, was very fond of his Uncle Bob.  When he was a young man, he worked for his Uncle at a gas station in San Diego.

What I had not known until this week, was what became of Alice after she and Uncle Bob divorced?

Prior to the birth of her son, Alice was working for the telephone company (evidenced in the 1930 San Diego census).

In the 1934 San Diego city directory Robert and Evelyn are living at 4402 35th St. He is the manager of a Standard Gas Station.  Their son would have been 2 years old by this time.

In the 1938 San Diego city directory listing I find Robt. W. Hall listed with Evelyn at 1132 Bush in San Diego.  It seems that Alice went by her middle name in most of the records I’ve located.

I don’t have online access to every year of the San Diego city directories. In addition to the ones online, I do know that some of them can be found at our downtown library here in San Diego.  It’s been some time since I’ve made the hour long trip down there.

The next hint I have about (let’s call her Evelyn from this point on) and her family is a 1940 census where her husband Robert W.,  is living with his parents and younger brother.  Bob is listed as divorced.

Where was Evelyn living in 1940?  I have found one census that seems to fit her.  An Evelyn B. Hall (she could be using her maiden name of Bullock as a middle initial), born in Rhode Island, divorced, working for the W.P.A. and the correct age to be our Evelyn.  She is living with an Orpha Doty (listing Evelyn as a sister).  However, I don't have a sister by the name of Orpha associated with Evelyn.  I need to go back to the Bullock family and see if there is a daughter I may have missed.  Or is this not Evelyn?  But, where is little Robert Jr.?  He would only have been 8 years old by now and I know he lived into adulthood (died on 16 Feb 2019 age 86).

Now that I’ve located both Bob and Evelyn, I need to go looking for young Robert Jr/ in 1940.

I looked with both sets of grandparents and didn’t find this young boy. So where was he living? I also did a image by image of the 41 pages of the 1940 census where I located that Evelyn B. Hall, mentioned above.  I found no Robert W. Hall listed.  No matter what spellings I used.

After 1940 we get into a time when records are not as easy to come by.  We don’t have the 1950 census yet and many vital records are restricted due to people still assumed to be living.

In searching city directories I have located several with Evelyn and her second husband, Harold E. Ray.  They were listed at the same residence in 1945, in San Diego.  Can we assume they were married?  Probably back then, yes. I don't have a marriage record for this couple yet either.

Here are Evelyn and her husband Harold Ray in the 1967 San Diego city directory.

And here they are in the 1971 San Diego city directory, the year before her death.  Her obituary in Feb 1972 gives her address as 5521 Taft. 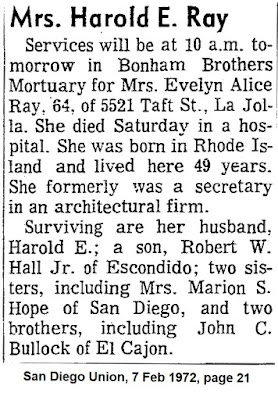 From the city directories to my locating her obituary and burial place, that would be all I can learn about Alice Evelyn Bullock Hall Ray.  At least at this time.

If anyone reading this has any additional information I would certainly welcome it.

OTHER POSTS THAT MAY BE OF  INTEREST