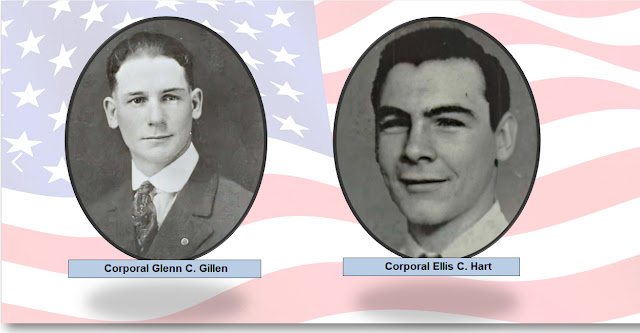 A few days ago I wrote about finding yearbook photos on Ancestry.  As I was going through the photos I had, they included 2 young men who were in high school during or just before the time of World War I (1914-1918).  They ended up serving our country and sadly, they never came home.  They were killed in action.

The first is Corporal Glenn Clifford Gillen.  Son of Elijah Cecil Gillen & Bessie Etta Cowen.  Glenn was born 1 Jan 1896 in Chesapeake, Lawrence, Ohio. He was the 3rd child of 9 born to this couple.  The second oldest son.  There were 6 boys and 3 girls.  All of his siblings lived to adulthood and, in fact, well into old age, except Glenn.  Glenn is my maternal 2nd cousin 3 times removed.

Glenn attended Independence High School in Independence, Montgomery, Kansas and if he graduated, it would have been about 1913-1914.  He is honored in the 1919 yearbook for this school on a memorial page for those lost during World War I.

Glenn registered for the draft in Montgomery, Independence, Kansas in June 1917.  He gives his age as 21 years, he’s single, and he works as a Laborer.  Physically he was described as tall, medium guild, gray eyes and brown hair.


Here is his World War I Registration Card 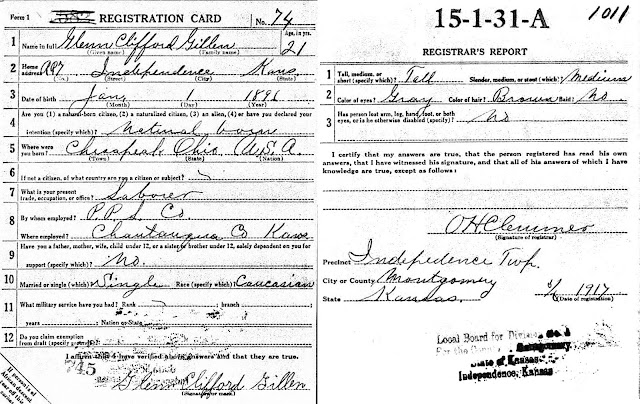 Fifteen months after signing that draft registration card, Glenn Gillen was killed during the Meuse-Argonne battle in France.
Corporal Gillen is buried in the Meuse-Argonne American Cemetery and Memorial in France.  You may visit his memorial here #55992727.
The second soldier we will honor today is Corporal Ellis Collins Hart.  Only son of Hermon Doten Hart & Florence Bell Hakins.  Ellis was born 27 Oct 1927 in Ohio.  He had one sibling, an older sister Caroline Harriet Hart (1926-2006).  Both of the children were adopted according to the 1930 census.
Ellis is my paternal 3rd cousin once removed.

Sadly, Ellis’ father Hermon D. Hart died in 1933, at the age of 44, while saving his daughter, Caroline from drowning.  Stay tuned for a post about that incident.

Ellis attended Jesup W. Scott High School in Toledo, Lucas, Ohio.  The photo I have for him from the yearbook lists his age as 16 in 1944.

Ellis did register for the World War II draft on 27 Oct 1945.  He was single and described as 5’ 8 1/2” tall, 165 pounds with brown hair, gray eyes and light complexion.  His mother, Florence is listed as his next of kin.  He was employed by the A.P. Tea Company. 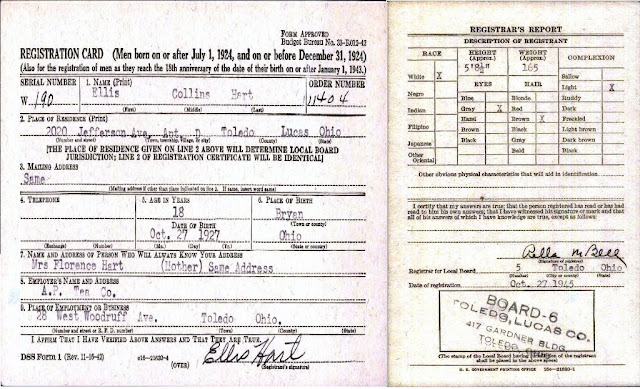 So, Ellis enlisted in the Army in 1946.  Yet in 1950, when he was killed, he was serving with the U.S. Marine Corps, 2d Battalion, 7th Marine Division.
You can find references to Ellis’ Marine service and his being killed in action on the following links. He was killed by hostile fire on 3 Oct 1950 by gunshot or small arms fire.  He was a ground casualty.


Here is his headstone photo


I am happy to have honored these young men today.  May they always rest in peace.

If you are connected to any of the family I’ve written about today, I’d love to hear from you.


ALL RIGHTS RESERVED.  NO USE WITHOUT PERMISSION
Posted by Diane Gould Hall at 3:37 PM