What does Amanuensis mean anyway?
To put it simply, it means a “person employed to write what another dictates or copy what has been written by another.”

There are 24 people with the VAUGHT surname in my tree. Five of them bear that name through marriage.

Today I’m writing about John VAUGHT who married my 5th great grandaunt, Elizabeth MARTIN in about 1784 in Pennsylvania.  John’s brother, Gilbert Vaught married Elizabeth’s sister, Mary Martin.  It’s not unusual, as we know, for families to intermarry back then.  It’s less common as we go into the 20th century.

NOTE/TIP:  I had located a transcription of John Vaught’s will a few years ago.  While it is always nice to find such a thing, I don't like to settle for just a transcription if I don’t have to.  I would much prefer to see the actual entry in a will book, which may include additional information.  I would also prefer to transcribe the will myself.  Sure enough, today, I hunted until I located the images on Family Search.  The will was located in Kentucky Probate Records, 1727-1990, Muhlenberg, Will records, 1801-1814, Vol. 1, pages 170-173 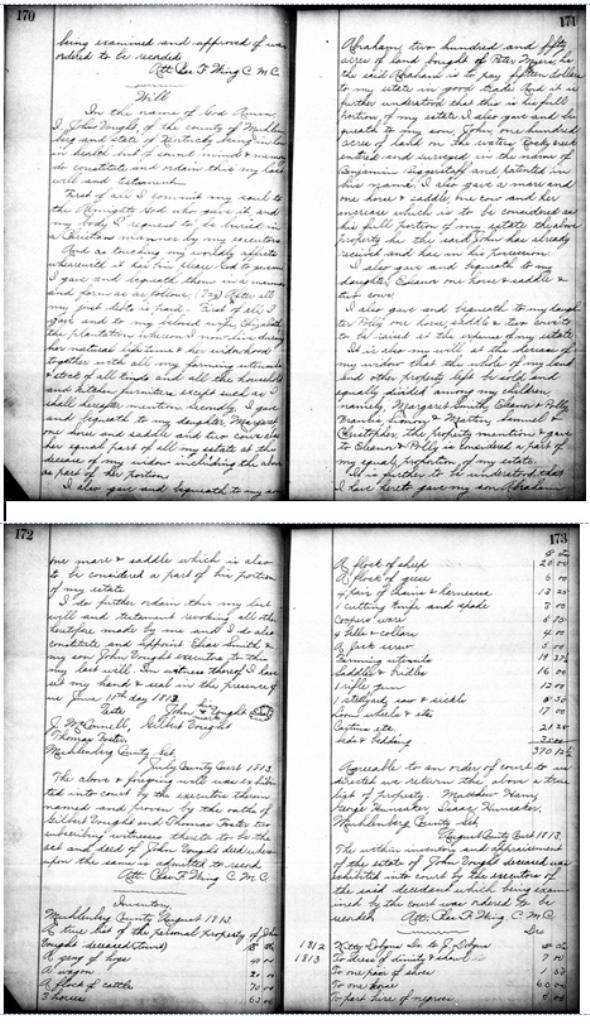 In the name of God Amen. I, John Vought, of the county of Muhlenberg and state of Kentucky being in low in health but of sound mind & memory do constitute and ordain this my last will and testament.

First of all I commit my soul to the Almighty God who gave it and my body I request to be buried in a Christian manner by my executors.

And as touching my worldly affects wherewith it has bin please God to gave I gave and bequeath them in a manner and form as as follows (viz.)

After all my just debts is paid First of all I gave and to my beloved wife, Elizabeth, the plantation whereon I now live during her natural life time & her widowhood together with all my farming utensils & stock of all kinds and all the household and kitchen furniture except such as I shall hereafter mention.

Secondly, I gave and bequeath to my daughter, Margaret, one horse and saddle and two cows also her equal part of all my estate at the decease of my widow including the above as part of her portion.
I also gave and bequeath to my son Abraham two hundred and fifty acres of land bought of Peter Myers, he the said Abraham is to pay fifteen dollars to my estate in good trade And it is further understood that this is his full portion of my estate.

I also gave and bequeath to my son, John, one hundred acres of land on the waters Rocky Creek entered and surveyed in the name of Benjamin Biggerstaff and patented in his name. I also gave a mare and one horse & saddle one cow and her increase which is to be considered as his full portion of my estate the above property he the said John has already received and has in his possession.

I also gave and bequeath to my daughter, Eleanor, one horse & saddle & two cows.

I also gave and bequeath to my daughter, Polly, one horse, saddle & two cows to to be raised at the expense of my estate.
It is also my will at the decease of my widow that the whole of my land and other property left be sold and equally divided among my children namely, Margaret Smith, Eleanor & Polly, Francis, Simon & Martin, Samuel & Christopher, the property mention & gave to Eleanor & Polly is considered a part of my equal proportion of my estate.

It is further to be understood that I have hereunto gave my son Abraham one mare & saddle which is also to be considered a part of his portion of my estate.

I do further ordain this my last will and testament revoking all others heretofore made by me and I do also constitute and appoint Elias Smith & my son John Vaught executors to this my last will. In witness thereof I have set my hand & seal in the presence of us June 11th day 1813.

The above & foregoing will was exhibited into court by the executors therein named and proven by the oaths of Gilbert Vaught and Thomas Foster two subscribing witnesses thereto to be the act and deed of John Vaught decd. whereupon the same is admitted to record.
Att. Chs. F. Wing C.M.C.


Question - John’s will mentions 10 of the 11 children I have listed for him in my tree.  The only one not mentioned is Daniel, born about 1794.  Did he die?  Was he out of favor?  Had he already been given his portion of the estate?

With so many Vaught’s in my tree I am learning more and more about this family all the time.

If you are related to anyone mentioned in this post, I’d love to hear from you.