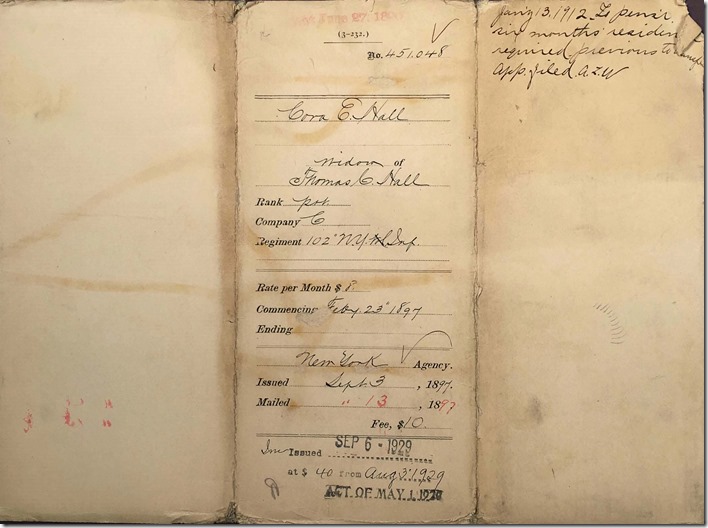 This pension file was the fourth one I’ve received in the past 6 months.  It contains fewer pieces of family information than any of the other three.  And, being only 30 pages, is certainly the smallest of all four.  However, there are still genealogical gems to be found within the file.

Cora E. Brown Hall was the widow of Thomas Cornelius Hall.  They are my husband’s great grandparents.  Prior to receiving this pension file I did not have an exact date for their marriage.

However, on the very first page of this pension file I find not only the exact marriage date, but two other dates of interest.

(CLICK ON ANY IMAGE TO ENLARGE IS FOR EASIER VIEWING) 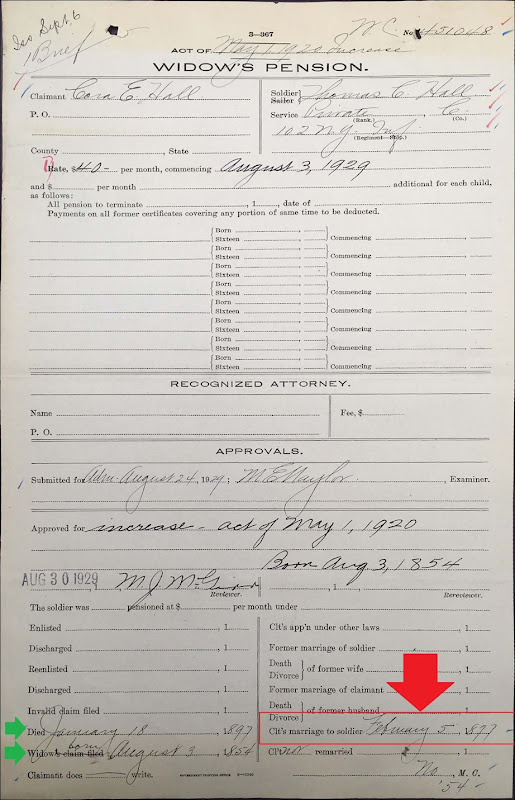 The red arrow indicates the “Clt’s (claimant’s) marriage to soldier” as February 5, 1877.  The two green arrows give us the date of Thomas’ death and the date of birth for Cora.  Those are two dates I already had, but another piece of evidence to document them is always welcome.

Now that I have the exact date of Thomas & Cora’s marriage, I’m hoping to find the official document for that marriage.

What else was of note in this pension file?


A statement that the pensioner, Cora E. Hall, is dropped from the roll because of death on Sept. 9, 1933.


Another letter from Cora to the Commissioner of Pensions dated Aug. 3rd.  This letter, in her own hand, gives the dates of her birth and the date of her marriage and also states that the pension is her only income.


A notarized statement from Cora that neither she nor her husband were divorced and that she has $1500 from a life insurance policy on Thomas.


A deposition by Emma S. Burt who states she has known Cora for all of her life.  She also states that she was present at her marriage to Thomas and gives the date of marriage, name of the Pastor who performed the ceremony and the church where the marriage took place.  These are wonderful pieces of information to have for further research.


A transcript from the Registrar of Saratoga Springs, New York, Bureau of Vital Statistics regarding the death of Thomas C. Hall.  This gives a wealth of information about Thomas.  I already had a transcript of his death, obtained several years ago, but had I not, this would have been a gold mine.  It contains his parent’s names and places of birth.


A deposition from Pastor Joseph Carey, who married Thomas & Cora.  More evidence for their date & place of marriage.


Application for Transfer stating that Cora moved to San Diego, California at the end of the year 1911.  This statement gives her address in San Diego and is signed by her son, Charles, daughter-in-law Daisy and by Cora herself.

Here are a few samples of the pages referenced above. 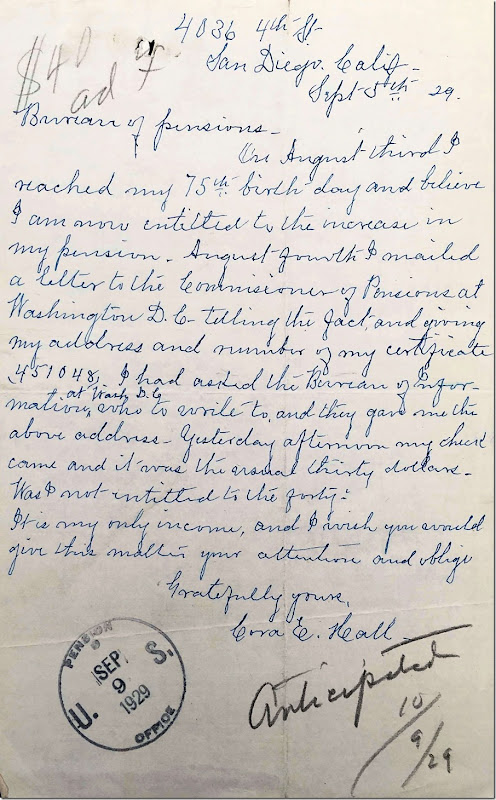 
Page 30 – the letter from Cora’s son, Charles stating she has died 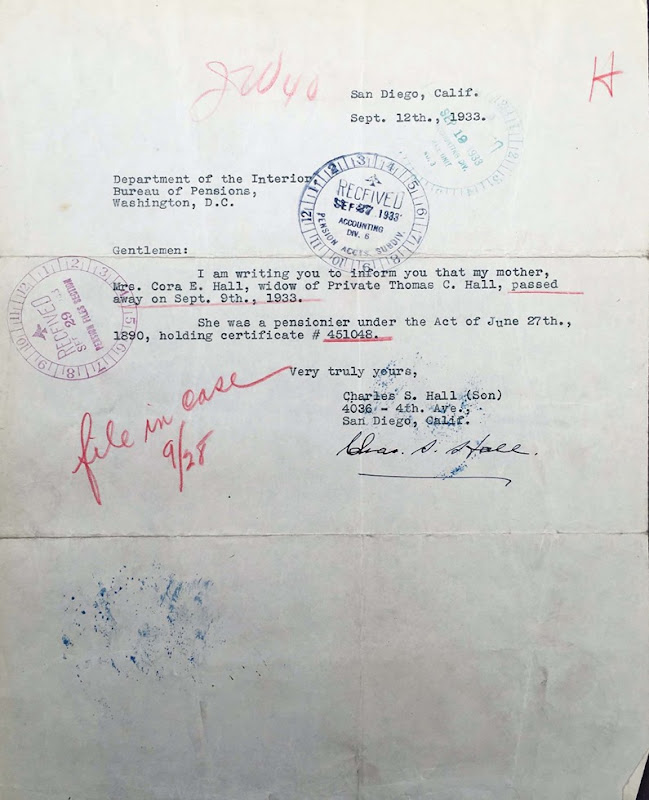 This document and it’s 30 pages, while not huge, does contain important information about Cora, her deceased husband, Thomas and her life.


Cora and Thomas only had one child that we know of and that is Charles Schuyler Hall (my husband’s grandfather), born 5 Mar 1878 in Saratoga Springs, New York; married Daisy Fern Bright on 15 Oct 1903 in Tarentum, Allegheny, Pennsylvania and died on 25 Mar 1953 in San Diego, California.

I do have one photo of Cora E. Brown Hall, obtained from my husband’s cousin. 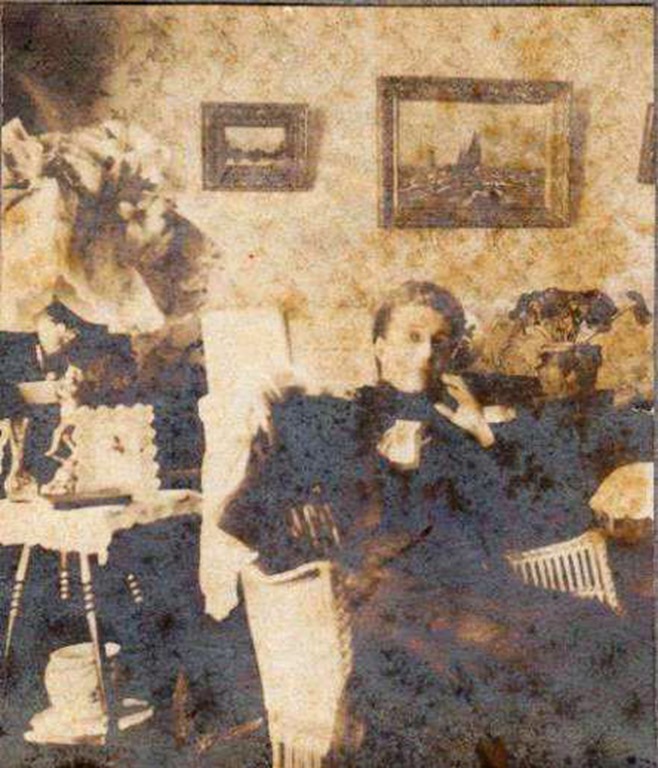 I’ve just ordered two more pension files.  One for my side of the family and the other from my husband’s side.  I find that these files are well worth the cost and can't wait to explore them.


I recently wrote a post about Cora’s father, Charles Henry K. Brown, who was a Cigar Maker in New York.  You can read that post here 52 Ancestors in 52 Weeks – Week #5 – Charles Henry Brown.

What gems have you found in pension files?