So, who was Nelson aka Horatio Nelson Klinefelter?

I had learned about Mary Jane’s marriage to Nelson Klinefelter from the Greenwood Cemetery website, back in August 2008.  Here is a link to the FindAGrave page for Greenwood Cemetery.
Following is an excerpt from my notes for Mary Jane Bright.

“Bright, Mary J. , (view ), 1839 - 1903, Section 2, Range 18, Lot 7, [was the second wife of William Bright of Sharpsburg. She was first married to a Kleinfelter in Virginia, according to researchers at Ancestry, and when she married William Bright, she brought 3 children into the household from her first marriage. She and William had at 4 children, bringing the house total to 9 children]” contributed by Diane Nichols

I was able to locate the marriage record for Mary Jane Flinn and Horatio N. Klinefelter.  They were married 27 Nov 1851 in Wood County, Virginia. 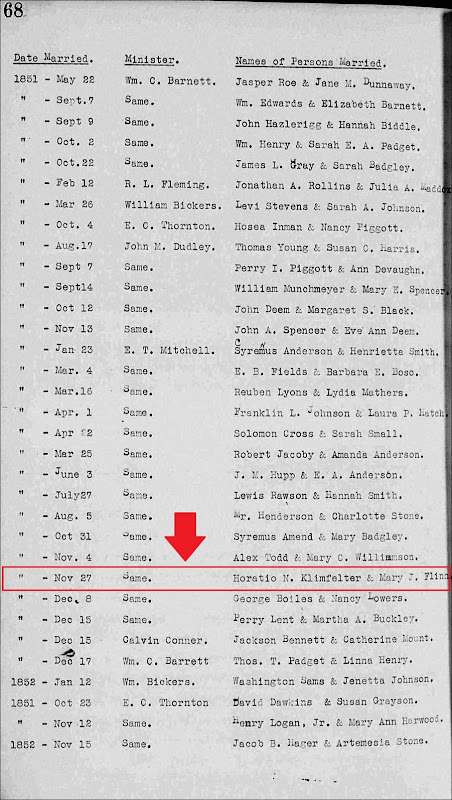 The family can be found living in Collins, Allegheny, Pennsylvania in the 1860 census.  Also enumerated on this page is Nelson’s brother, Jesse and family and his father Jacob and family. 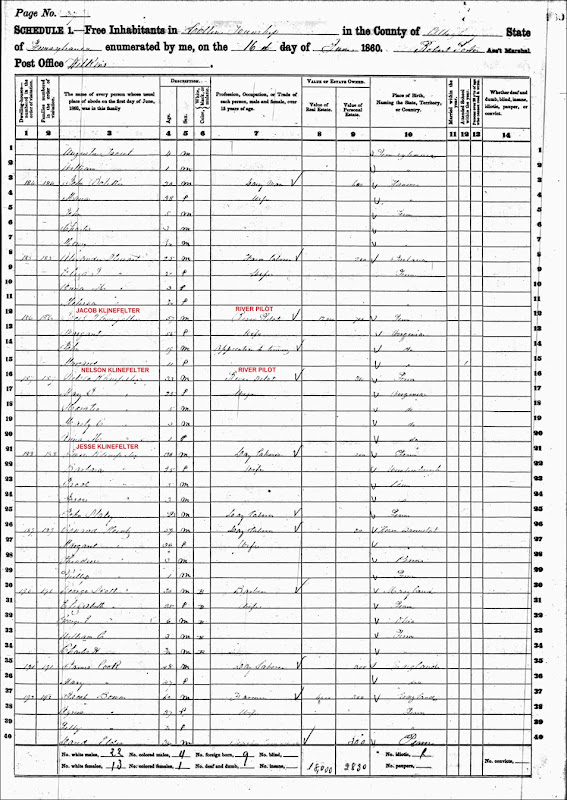 As I began conducting a search on newspapers.com, I came across the sad story about the explosion of the steamboat, Advance, and the death of Nelson Klinefelter.  I also located one article in Chronicling America.
All images of these articles are screenshots.

The first article I located was the one at the top of this page.  Then I also located the following articles.


The article above, on the left gives us the exact date of death for Nelson.  The explosion occurred on Tuesday, January 28, 1862.  Based on the statement in this article, Nelson died 3 days later, on Friday, January 31, 1862.

“The other pilot, N. Klinefelter, was asleep, his head and one arm lying over the edge of the bed.  His face and arm were terribly scalded and it is believed that he inhaled steam.  He died of his injuries on Friday morning, some hours after the arrival of the Hornet, after being removed to that boat.”

These excerpts are from the article, above, on the right.

“The Captain was not on board, one of the pilots named Stweart, filling his place.  He escaped with a severe burn on the right hand.  The other pilot, N. Klinefelter, was asleep, his head and one arm lying over the edge of the bed.  His face and arm were terribly scalded, and it is believed he inhaled steam.”

When I first began reading the articles only stated that N. Klinefelter had been “terribly” burned.  As I continued to locate more articles, I learned of his death.

I have searched high and low on the internet and cannot locate a burial place for Nelson.  There were few, if any, actual death records back in 1862, so the only record of his death are these articles and the statement in the Civil War Pension of William Bright saying that Mary Jane’s first husband, Klinefelter, was deceased.

If you have any additions or corrections to anything written here, please contact me.

If you are related to anyone mentioned here, I’d love to hear from you.

SURNAME SATURDAY - Who was Daisy Bright?