Charles Henry Brown also known as Charles H. K. Brown is my husband’s
2nd great grandfather
What I DON'T know about Charles Brown…
I have gathered quite a bit of information about Charles H. Brown over the years of my research.

The easiest way to present what information I have on him is by sharing an Event Report.  This is a report created in Legacy 8, using the Event/Fact section for each individual.  I use this area extensively on all my ancestors.

(CLICK ON ANY IMAGE TO ENLARGE IT FOR EASIER VIEWING)

The report above tells me each event/fact I have entered and depending on the information I have entered, all the details associated with that event, including the person’s age at the time of the event.

It’s not that I lack information about Charles H. Brown, I just don’t have additional information I would like to have, such as his parent’s names.

I haven’t been able to locate Charles in the 1850 census.  With the name Charles Brown or Charles Henry Brown being so common, this adds to the difficulty.
Charles & Cemanthe (Avery) Brown had two children that I know of.
1. Cora E. Brown, born 3 Aug 1854 in Syracuse, Onondaga, New York married Thomas Cornelius Hall and had one son, Charles Schuyler Hall.  Cora moved to San Diego, California after her husband’s death and died there on 9 Sep 1933.
2. Albert Walton Brown, born 24 Oct 1856 in Saratoga Springs, Saratoga, New York.  I don’t believe he ever married.  He too moved to San Diego, where he died on 5 Sep 1937.

Charles is listed in many city directories throughout his life.  He can be found in Syracuse, Troy and Saratoga Springs, New York directories.

Charles enlisted in the army during the Civil War.  His enlistment date was Aug 1862, as a Private in the 9th infantry for a term of 3 years. 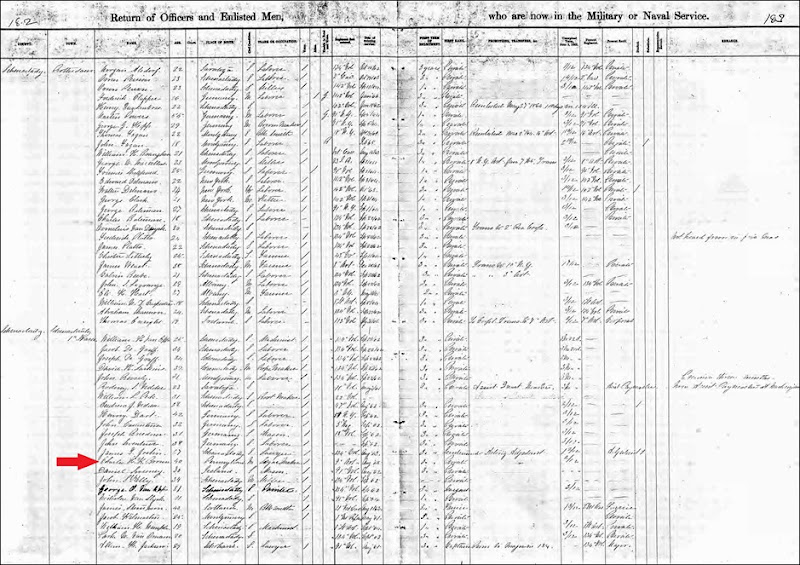 According to the Muster Roll (see image below), Charles deserted and was absent without leave 25 Jan 1863.  This record lists his unit as Company F, 134th Infantry.  What I liked about this muster roll was the personal information it provided.  Prior to finding this record I had no idea where in Pennsylvania Charles was born.  This record, if correct, states he was born in Philadelphia.  I also get a good idea of his physical characteristics. 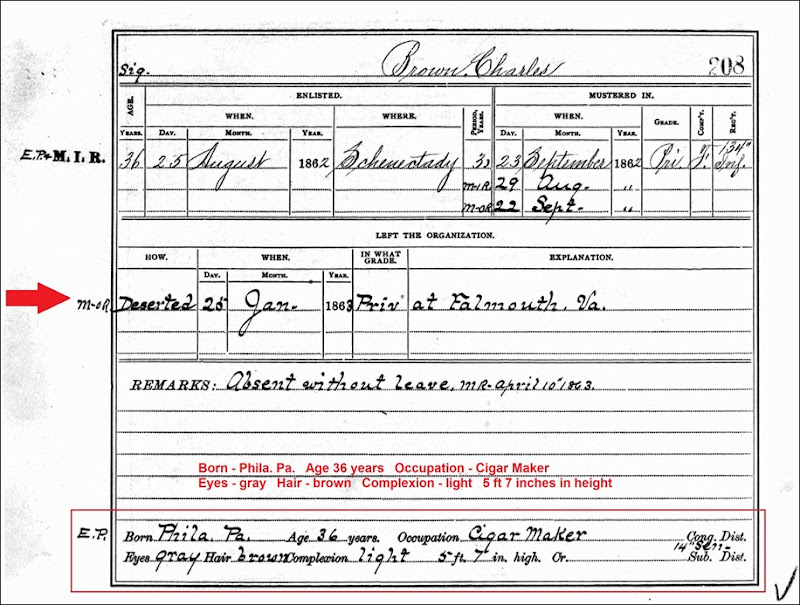 Did Charles ever return to service?  I have located no other military records for him, including no pension file.  His military unit is engraved on his headstone, so it makes me wonder.

It’s hard to believe that at sometime during Charles’ and Cemanthe’s life, there wasn’t a photo taken of them.  I have yet to find one.

Cemanthe died of Cerebral Apoplexy at age 70, on 26 Mar 1899 in Saratoga Springs, New York and is buried at Greenridge Cemetery. You can visit her memorial here #22149978.

According to online cemetery records, Charles died on 14 Apr 1903 and is buried with his wife, Cemanthe, at Greenfield Cemetery.  There is a picture of their headstone, but his portion is impossible to clearly read.  You can see his memorial here #22149991.

Here is the online record I found regarding their burial.  I had lost track of the URL for this cemetery index.  Thanks to reader, Cathy, for finding it and sending it to me.  To view the searchable, alphabetical index please click here.

The record above gives me the only reference to Charles Brown’s date of death.  I have not located a death record, yet.  And, I cannot locate Charles in the 1900 census.

During the preparation of this post I was able to locate one more piece of evidence referring to Charles as a Cigar Maker.  It’s a news article published in The Saratogian in 1963. 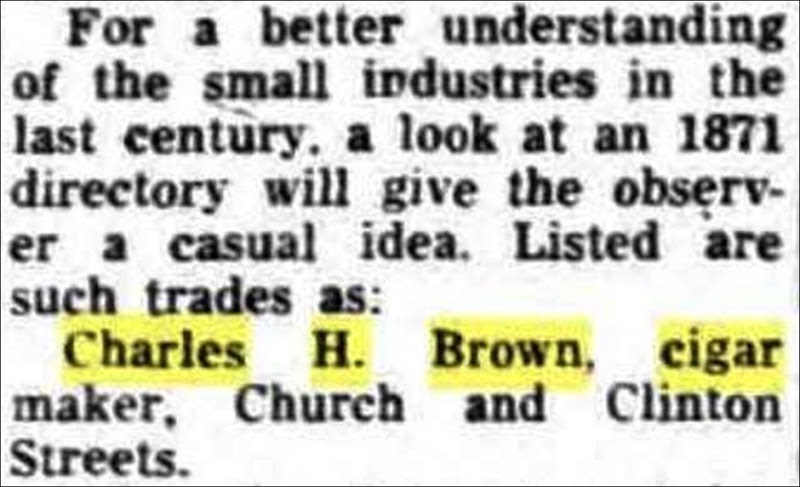 Here are a couple of screenshots, courtesy of Google Earth, of the area where Charles worked and lived in Saratoga Springs, New York., as they look today.


If you think you may be related to anyone mentioned in this post, or have additional information or corrections, please contact me.  I’d love to hear from you.

OTHER POSTS THAT MAY BE OF INTEREST
MYSTERY MONDAY ~ Unidentified Family Photos - AVERY, BROWN, BRIGHT, GOODBODY & HALL (Can you help us identify any of these people?)