I’ve been looking at my Frampton line today and especially studying their involvement in the Civil War.  They lived in southeastern Ohio and over into Virginia (what became West Virginia).

I know that there are “some” older newspapers available on newspapers.com, but I haven’t been particularly lucky in locating too many that mention my ancestors.

Today, I got lucky and got one single hit.  And, it was not in an Ohio or Virginia newspaper, as I would have expected.

I entered “David Frampton” with the years 1850-1865 and found the following article about his being transported by steamer from Guyandotte, Virginia to Cincinnati, along with other prisoners.  The prisoner, Charles T. Everett was the husband of David’s sister, Rebecca.  I’ve got to think that Peter Everett is also somehow related to Charles Everett, but don’t know for sure. 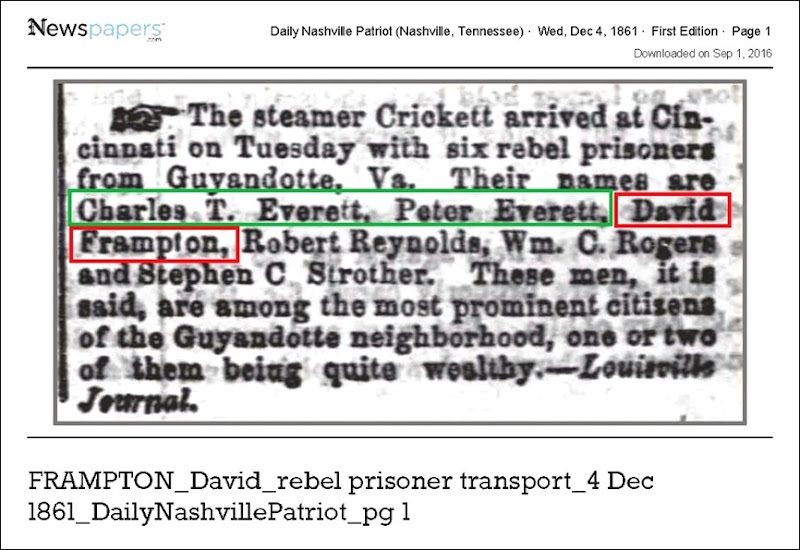 Transcription of the article:
“The steamer Crickett arrived at Cincinnati on Tuesday with six rebel prisoners from Guyandotte, Va.  Their names are Charles T. Everett, Peter Everett, David Frampton, Robert Reynolds, Wm. C. Rogers and Stephen C. Strother.  These men, it is said, are among the most prominent citizens of the Guyandotte neighborhood, one or two of them being quite wealthy – Louisville Journal.”

David Frampton was the son of my 4th great granduncle, Isaac Frampton, who was an early settler in Lawrence County, Ohio.

I located a couple of other references today on Ancestry and Fold3 that indicate David Frampton was a southern sympathizer.  More about that soon.

Just one newspaper article was all I located, but it is another piece of evidence to prove what I’m working on with this family.