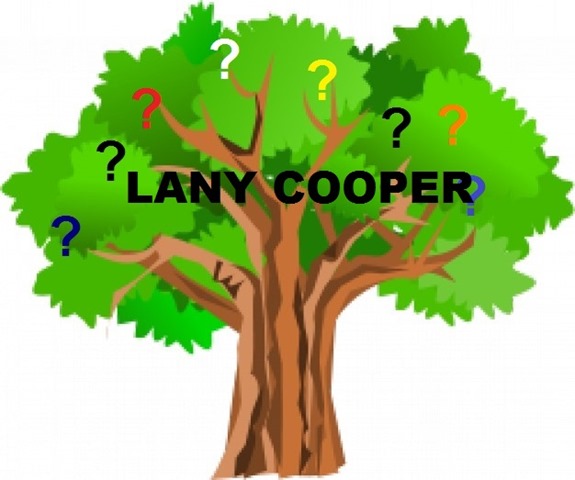 SOLVED!
Lany Cooper is my paternal 3rd great grandmother.  I have not been able to find more than a minimal amount of information on her family (meaning her parents and/or siblings).

Here is what I know at this point:

She was the second wife of Monson Thorp, Sr.  They married on 12 Apr 1835 in Cato, Cayuga, New York.  Monson’s first wife, Ann Eliza Armitage had died in about 1833, leaving Monson with a young daughter & son.  Anna Maria Thorp 1830-1903 and Rev. Wallace Walter Thorp 1833-1913.  Monson was a Wagonmaker.  He certainly would have needed help raising two young children under 4 yrs. of age.


Here is a view of Monson & Lany Thorp from my Legacy database:

The first hint I had of Lany’s parent’s names was on her death certificate.  Although her name is listed as “Fanny” and not Lany, I have confirmed the dates based on other evidence.  On this certificate, her parent’s names are given as Jacob Cooper and Polly Byrne, both of Albany, New York. 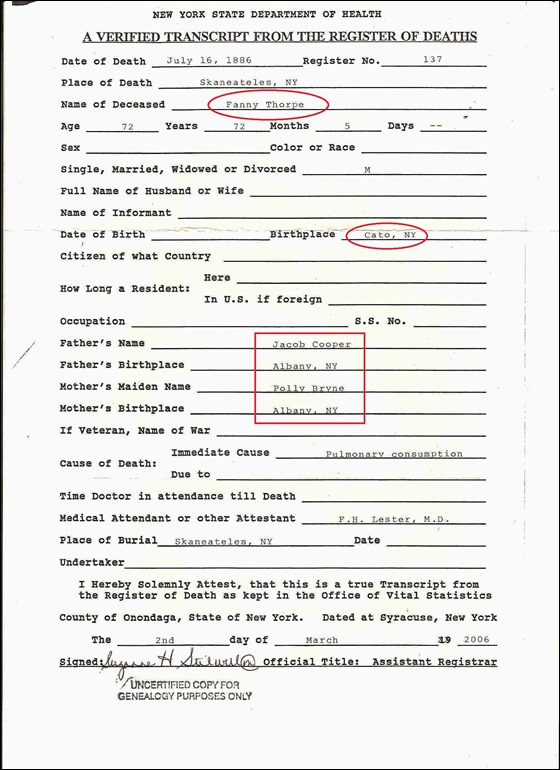 Here is a her death notice as published in the Skaneateles Press 24 Jul 1886.

After locating the death record and the death notice I also found a newspaper article about the 50th wedding anniversary for Monson & Lany.  This article was located via the Fulton History website.
Please note, I wrote a blog post about using the Fulton History website, which you can access here http://www.michiganfamilytrails.com/2015/04/i-hit-jackpot-on-this-website-old.html


Transription of the newspaper article above: “TO CELEBRATE THEIR GOLDEN WEDDING: Mr. and Mrs. Munson Thorp of this village will celebrate their golden wedding at their home on Jordan street, Sunday, April 12, 1883.  They were married April 12, 1833 at Cato, Cayuga county, that town being the native place of Mrs. Thorp, whose maiden name was Lany Cooper.  Mr. Thorp was born in Harpersfield, Conn. February 27, 1801, and is now in his 85th year.  They have always resided in Skaneateles since their marriage, and Mr. Thorp has been a resident of this village since October, 27, 1827. He is a wagon maker by trade first working in this town for the late John Legg, and for fifteen years he was employed by S & J Hall in the stone building now used by Thomas Kelley as a blacksmith shop.  Six children have been born to him, four yet living, all of whom have homes in the West.  Neither Mr. Thorp nor wife are very strong, but they keep house alone and manage the household duties between them.  While striving to lay up something for old age, Mr. Thorp has been unsuccessful, but has always managed to maintain his household without aid, though the struggle is hard for a couple so aged and infirm.  They will be “at home” to all their friends who may desire to call on them on their golden wedding day – a week from Sunday next.”

Finding newspaper articles like the one above certainly is a bonus for any researcher.  There is a lot of good genealogical information contained in the piece.  Of course it all must be confirmed, but still, such great leads.


And finally, I do have a picture of Lany’s headstone.  You can visit her memorial on FindAGrave #32026022.  She is buried, with her husband, Monson and their daughter, Lucyette, at Lake View Cemetery, Skaneateles, Onondaga, New York. 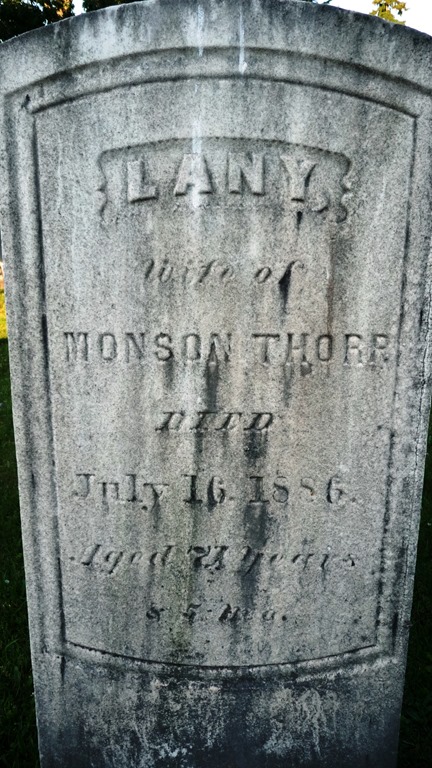 Other than making a trip to Cayuga County, New York, I have not found anything that gives me more information about Lany’s parents and/or siblings, if there were any.  I would be grateful to anyone who could provide more information, or new ideas.  I've looked at census & land records in New York for the appropriate years and come up empty.

Please visit my other “Who’s Your Daddy?” posts here http://www.michiganfamilytrails.com/p/test.html


PLEASE contact me if you think you might be related, even remotely, to anyone mentioned in this blog.
Happy hunting,