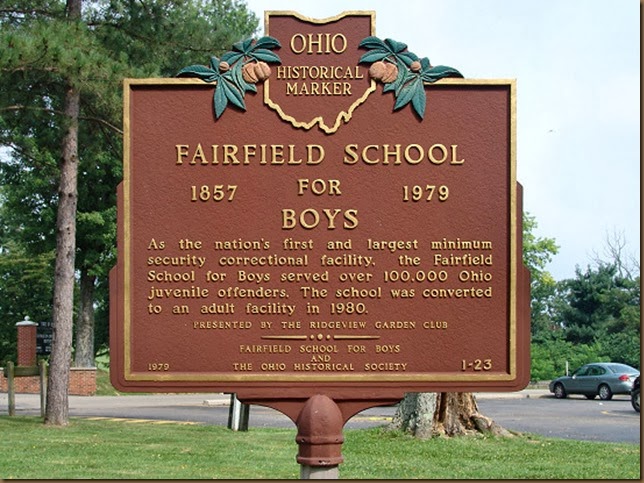 This is a follow up to my post about the murder of my ancestor Hobart B. Stewart.  He was a guard at the Boys Industrial School in Fairfield County, Ohio.
You can read the post here: http://www.michiganfamilytrails.com/2014/02/thriller-thursdayhobart-b-stewart.html

There are many websites with information about this school.  This school was the first minimum security correctional facility for youthful offenders in the nation. 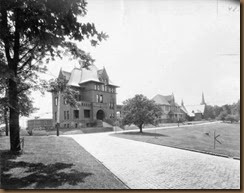 “In 1857, the Ohio government established the Ohio Reform School, the predecessor to the Boys' Industrial School. The Ohio Reform School was a reformatory for boys between eight and eighteen years of age. It was located approximately five miles south of Lancaster, in Fairfield County, Ohio, and the institution accepted its first inmate in 1858.
Before the creation of this institution, the State of Ohio imprisoned male juvenile offenders in the Ohio Penitentiary with adult criminals. The Ohio Reform School was not like a traditional prison. Walls and fencing did not surround the inmates. Rather, the Ohio Reform School utilized the "open system." The boys could traverse the grounds freely. They lived in cottages -- not prison cells -- with forty boys to a cottage. The cottages were named after rivers in Ohio. Guards, cottage matrons, and other workers supervised the boys, but the intent was to create an institution that would educate and instill good and productive values in the boys. Because of the Ohio Reform School's success, by 1901, twenty-eight states adopted the "open system" for their juvenile prisons.
Each boy arrived at the Ohio Reform School with a certain number of demerits, which were based on the severity of their crime. For good behavior, students lost demerits. Once they reached zero demerits, the boys were freed and returned to their families. Students could also have demerits added for bad behavior, and in extreme circumstances, corporal punishment was permitted.
The boys spent one-half of the day in school and the other one-half either working on the Ohio Reform School's farm or learning a trade in one of the vocational education buildings. In 1901, the school offered training in blacksmithing, tailoring, baking, carpentry, stenography, brick making, shoemaking, horticulture, and cattle-raising, among numerous other professions. This same year the institution also boasted a forty-two-member band, and the children received military training as well.
In 1884, the Ohio Reform School became known as the Boys' Industrial School. Comedian Bob Hope spent some time at the Boy's Industrial School as a child. As an adult, Hope donated sizable sums of money to the institution. In 1964, the institution became known as the Fairfield School for Boys, and in 1980, the school became the Southeastern Correctional Facility for adult offenders. In 2004, juvenile inmates were held in eight juvenile detention centers across Ohio.”
I located a site that has an index for the school that allows you to enter the name and bring up the information for those who spent time at this facility.  I located the entries for the two suspects who killed my ancestor, Hobart B. Stewart.
http://ww2.ohiohistory.org/resource/database/industrial/
Inmate Name: Sedar, Frank (boy)
Inmate Number: 36811
Volume Number: 51
Page Number: 411
Volume Dates: 1936
SAS Number: 1097

I also learned, from a couple of readers, that actor, comedian, Bob Hope (real name Leslie/Lester Hope) spent some time at this facility.  Below is an excerpt from this site:  http://en.wikipedia.org/wiki/Bob_Hope

“From age 12, Hope earned pocket money by busking (frequently on the streetcar to Luna Park), singing, dancing, and performing comedy patter.[4] He entered many dancing and amateur talent contests (as Lester Hope), and won a prize in 1915 for his impersonation of Charlie Chaplin.[5] For a time Hope attended the Boys Industrial School in Lancaster, Ohio. As an adult, Hope donated sizable sums of money to the institution.[6]”


Here is another site for good information on this facility: http://ohiohistory.wordpress.com/2007/01/27/boys-industrial-school/

One of the many aspects of doing genealogy research that is very interesting to me, is the amount of history we learn as we go.  The history of people, places & cultures never gets boring.  Well, history was my favorite subject in school, so I guess this is no surprise.

I'm sure there is a lot more to learn, so I'm off to find it.