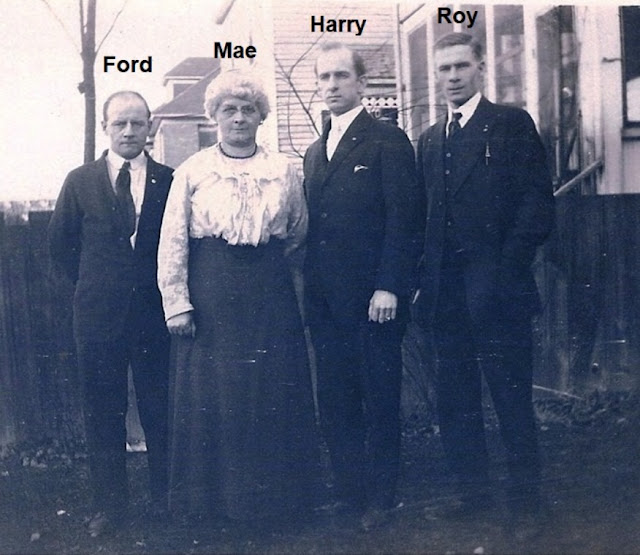 This week’s subject for 52 Ancestors is “Bachelor Uncle.”  Since my only Uncle, Robert Milne married twice, I couldn’t write about him.  However, my Dad had 2 uncles, Roy and Ford Gould.  So I’ll write about my bachelor great-uncle, Ford V. Gould.

My Dad was an only child.  He was also the only grandchild of his paternal grandparents, William Val Gould and Mae Thorp Gould.
While I was growing up my Dad loved to talk about his uncles & aunts.  I knew all their names; Ford, Roy, Harry (my Dad’s father), Gladys, May “Adele” and Helen.  Wishing to this day I’d written down every word or recorded the stories.  Happily I do have family photos.


This is a photo of my great grandparents, William & Mae Gould & all 6 of their children along with my grandmother, Marie Lindsay Gould and my Dad, Harry Norman Gould 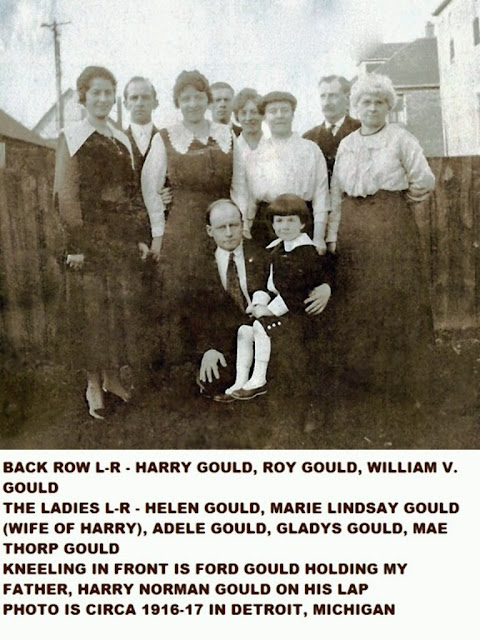 Ford was the oldest of the six children.  He was born 31 Aug 1884 in Detroit, Wayne, Michigan1.  That birth date is listed on his birth record and his death certificate.  However, his WWI and WWII draft registrations give a birth date of 30 Aug 1883.  From all records I have located for him, Ford always lived in Detroit and it seems, he stayed in the same home as his parents until his death at age 62.

Let’s look at a timeline for granduncle Ford:

1900 - The first census I find Ford enumerated in, is the 1900 (still wishing we had that 1890 lost census).  He was living with his parents and siblings and going to school.  The family was living at 1034 13th St. in Detroit.  The census tells us that Ford’s father, William owned this home.
1901 – Detroit City Directory2 – Helper – living at 899 16th St.
1903- 1907  – Detroit City Directory – Machinist – living at 905 16th St.
1910 - By the time of the 1910 census, Ford was 26 years old, single and working as a Teamster for a steel construction company.  He was still living in the same home as his parents and four siblings.  They were living at 828 14th Ave. in Detroit.
1911-1919 – Shown in the Detroit city directory as boarding at 125 Linwood.  This directory gives his occupation as a Machinist.  Living at this same address are his father, William. Off and on at the same address you find Ford’s brother, Harry and his sisters Gladys & Adele.
1918 – Ford registers for the draft for World War I – he lists his address as 125 Linwood, his occupation as a Machinist and his next of kin as his father, William.
1920 – Enumerated as a Machinist at an adding machine factory, living at 818 Hudson Ave., along with his father and mother.
In 1924 Ford’s father, William dies at age 64 of peritonitis due to a ruptured bladder.  This left his mother, Mae a widow and Ford continued to live with her until her death in Nov 1946.  Ford died 7 months later, 17 Jun 1947 of hypertensive heart disease.
1942 – Ford registers for the draft for World War II – he is living at 5639 Linwood and his mother, Mrs. Mary Gould, is listed as his contact info.  He is working at Cyclops Steel Co in Detroit.  His physical characteristics are given as 5’1”, blue eyes, gray/bald hair, ruddy complexion and 148 pounds.  This coincides with the less descriptive physical characteristics from the WW I draft.

Ford spent his life working mostly as a Machinist and at one time a Teamster.  Here are the definitions I've located online for those two professions.

A machinist is a person who machines using hand tools and machine tools to create or modify a part that is made of metal, plastics, or wood.  Courtesy of wikipedia

A teamster, in modern American English, is a truck driver, or a member of the International Brotherhood of Teamsters, a labor union in the United States and Canada. ... Originally, the term "teamster" referred to a person who drove a team of draft animals, usually a wagon drawn by oxen, horses, or mules. Courtesy of wikipedia

I cannot speculate as to why my granduncle Ford never married. I don’t have any details of his personal life.  Wouldn’t we love to go back & ask our ancestors what their interests were, did they have any hobbies, did they travel and if so, where to and so many other questions? I hope granduncle Ford lived a happy life.

The following cut out of a picture of Ford was located among the family photos left to me by my father.  The back of the picture says “Mr. Ford Gould year of 1915 December 25th.”  I do not recognize the writing as that of either my Dad or my grandmother. 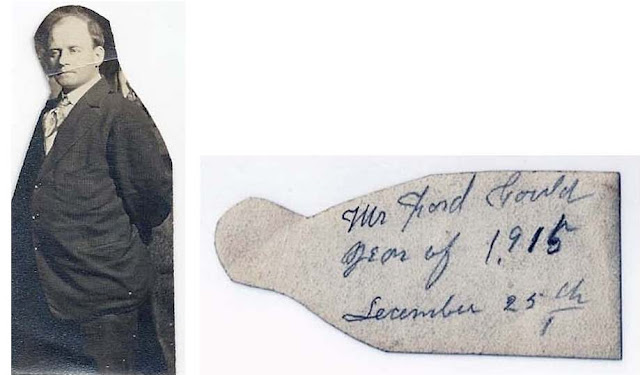 Ford’s obituary was published in the Detroit Free Press3 on 19 Jun 1947, page 24 and reads as follows:

GOULD-June 17, Fred [Ford] Val, beloved son of the late William Val and Mary Eve; brother of Harry, Roy, Mrs. Gladys Smith, Mrs. Adele Sine and the late Helen.  Funeral from Harvey A. Neely Funeral Home, 5683 Maybury Grand, Friday at 10 a.m.
[His first name is mispelled in this obituary and should be Ford]

Ford is buried at Grand Lawn Cemetery in Detroit.  I have been there several times.  His memorial can be found here #61960668.

ANCESTORS IN THE NEWS - Ford Gould car was stolen