Today I’m honoring my 2nd cousin twice removed, Private Frank Gillespie.  He is a member of my Gillespie family from England and Wales.  Frank & I share common ancestors, Thomas Gillespie & Susannah Barrowcliff of Tiverton, Devon, England, who are my 3rd great grandparents.

Frank Gillespie was the oldest of 9 children born to Robert Gillespie and Ellen Eliza Potter.  He was born in the 1st quarter (Jan-Mar) of 1894 in Canton, Glamorgan, Wales, United Kingdom.1

I have not located any record that tells me when young Frank decided to join the service to fight in World War I.  I do have his enlistment place as Penarth.

I do know that during the 1st quarter (Jan-Mar) 1916 he married Agnes O’Callahan in Cardiff, Glamorgan, Wales, United Kingdom.  A daughter, Ellen was born 19 Mar 1916.

Here’s where the story takes a sad turn.  On 1 Jul 1916, Private Frank Gillespie, married father of a 3 month old daughter, was killed in a battle in France.  He was only 22 years old.  This must have been devastating news to his young wife and his parents and siblings.

I’ve located several records of Frank’s death, evidence that his wife’s name was Agnes and memorials to his sacrifice.

The Battle of Somme began on July 1, 1916 and ran until November 18, 1916.  It has been called the bloodiest battle of World War I.  It seems our Frank, was killed on the very first day.

Is this what it was like for Frank & his fellow soldiers?

This is a video filmed during the battle. 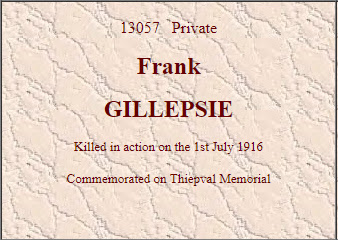 Frank is memorialized at the Thiepval Memorial in Somme, France.

After his death, Frank’s information was entered is this registry showing any money owed to him and to whom his personal effects should go.  This record indicates that Widow Agnes is the recipient of Frank’s effects.  This record, along with the record of the birth of their daughter Ellen, and the marriage record, give me 3 pieces of evidence that Frank and Agnes were, indeed a couple. 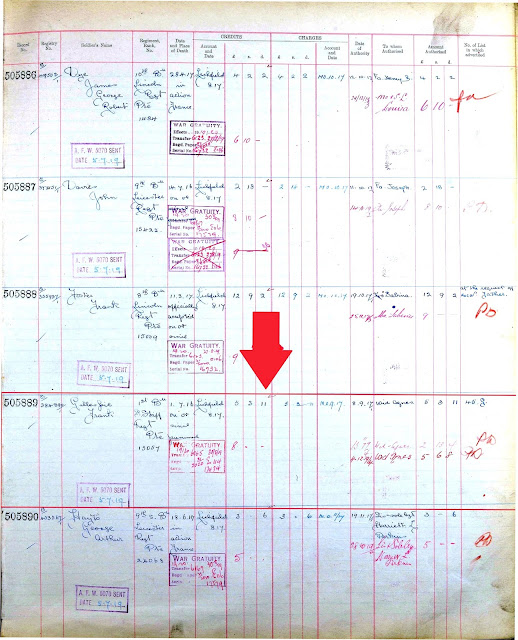 Frank Gillespie died fighting in what was then called “The Great War.”  I believe his daughter grew to adulthood and married a man named Albert E. Smith in 1937 in Cardiff, Glamorgan, Wales.  I have located a record of her death in 2003 at the age of 87.

Records from 1937 forward are not easy to locate in the U.K.  I am very interested to know if Ellen had children.  It would be nice to know that Frank’s lineage was carried forward.

I also wish I had a photograph of Frank.  Maybe one day I will connect with a descendant who has one.

R.I.P Private Gillespie - you were gone too soon.


If you are connected to this Gillespie family in any way, I’d love to hear from you.  Let’s exchange information.