Elizabeth Gillespie was born to Joseph Gillespie and Susan Burgess on 9 Feb 1865.  She was one of 3 daughters and 1 son born to this couple.  Her older sister, Susan Gillespie is my great grandmother, who pre-deceased her by a year.

Elizabeth married James Burgess Verney on 25 Sep 1884 in Detroit, Wayne, Michigan.  They celebrated 50 years of marriage just a few days prior to his death on 7 Oct 1934.  James served on the Toronto Police force starting as a Constable and reaching the position of Chief of Police.

Could this couple have been cousins on some level?  Elizabeth’s mother was Susan Burgess (1841-1933) and James’ mother was Elizabeth Burgess (1823-1909).  Both mothers were born in Devon, England.  However, at this time, I have not found a connection.  Do I think there may be one?  Absolutely!  I have more work to do on this family.

I have not been able to locate James & Elizabeth in any census record in 1930.  I did locate an Elizabeth Gillespie in the 1940 census, listed as an inmate at Eloise Hospital in Nankin Township, Wayne, Michigan.  This record gives her place of residence in 1935 as Highland Park, Michigan.  Her age in this 1940 census, is listed as 76 yrs and a birthplace of Canada (which is a place she lived, however my records show her born in Michigan).  These are all close to what I have for Elizabeth.  Her maiden name was Gillespie, so she could have been admitted under that name instead of Verney.  Records no longer exist for this hospital but you can read about this institution here.  It has a long history.  She is one of several of my ancestors who ended up at Eloise Hospital toward the end of their lives.

Elizabeth was living in Detroit, Wayne, Michigan at the time of her death in 1948.  I have the death index, but no death certificate.

She is buried in Toronto, Ontario, Canada at Prospect Cemetery, along with her husband James and other family members.  You may visit her findagrave memorial here #127128510. 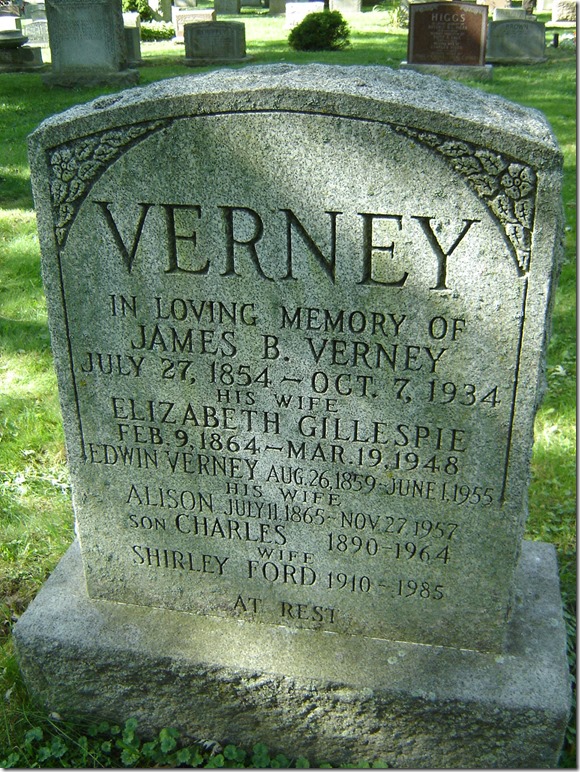 The Verney family was quite large and there are a great many descendants.  If you are related to them, I’d love to hear from you.

WHAT CAN YOU LEARN FROM A PROBATE RECORD? HERE'S ONE FROM 1884 FOR MY 3RD GREAT GRANDMOTHER