ANCESTORS IN THE NEWS ~ My Grandaunt May Adele Gould, age 9, plays piano in “remarkable” concert - 1909

I have to admit, newspapers are a complete source of fascination to me and always have been.

I never cease to be surprised what I can find when I start putting ancestor’s names in the search box.  Today was no exception.  I had already located several obituaries and other articles of interest.  I wasn’t sure what I was going to write about, and then I came upon this gem.

My Aunt Adele (full name May Adele Gould), mentioned with another young girl when they played in a concert together at ages 9 & 10. And what?  There’s even pictures of the girls! 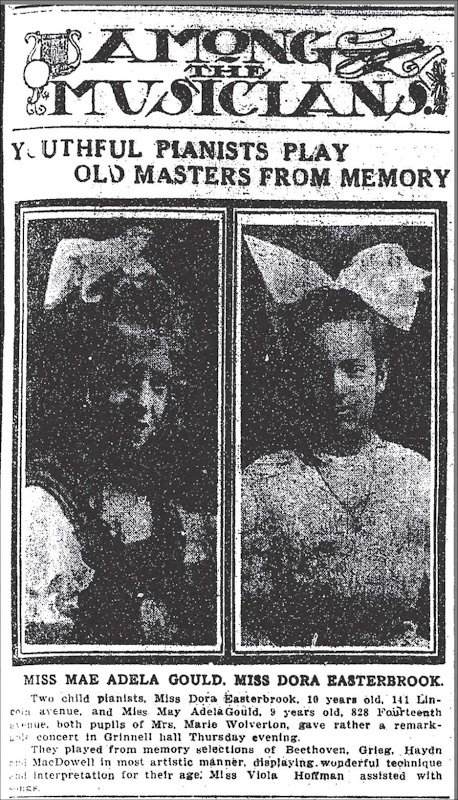 They played from memory selections of Beethoven, Grieg, Haydn and MacDowell in most artistic manner, displaying wonderful technique and interpretation for their age; Miss Vila Hoffman assisted with songs.

At first I wasn’t 100% positive this was “my” May Adele Gould.  The age was off by a year or so, her having been born (according to my sources) 25 Feb 1898.  And, her middle name being given as “Adela” and not Adele.  This concert took place in 1909.  The article gives her address as 828 Fourteenth Ave. and don’t you know, that’s the exact address she and her family were living in the 1909 Detroit City Directory and the 1910 census.  That put to rest any doubts I had.

Oh to be able to have a copy of that picture of Adele with the big bow in her hair. Adele is one my grandfather’s three sisters.  I have absolutely no photos of he or his siblings when they were young.  I’m sure that at some point in someone’s items they probably existed.

My Aunt Adele moved to California (where I have lived since 1965).  She didn’t pass away until I was in my mid 30’s, but I never went to see her.  One of her other brothers, Roy Gould, lived with her after the death of her husband.  So, there were two of my grandfather’s siblings within about a 3 hour drive of where I lived.  What family heirlooms, photos and memories were disposed of when they died?  It makes me shudder to think.

We had moved away from our family when I was pretty young and staying in contact with them was just never a priority.  Makes me pretty sad now.

I understand from cousins I’ve talked to, that Adele continued to play piano and organ throughout her life.  Here is a picture of her in her later years (generously shared with me by a cousin).  And, there she sits, right in front of her organ. 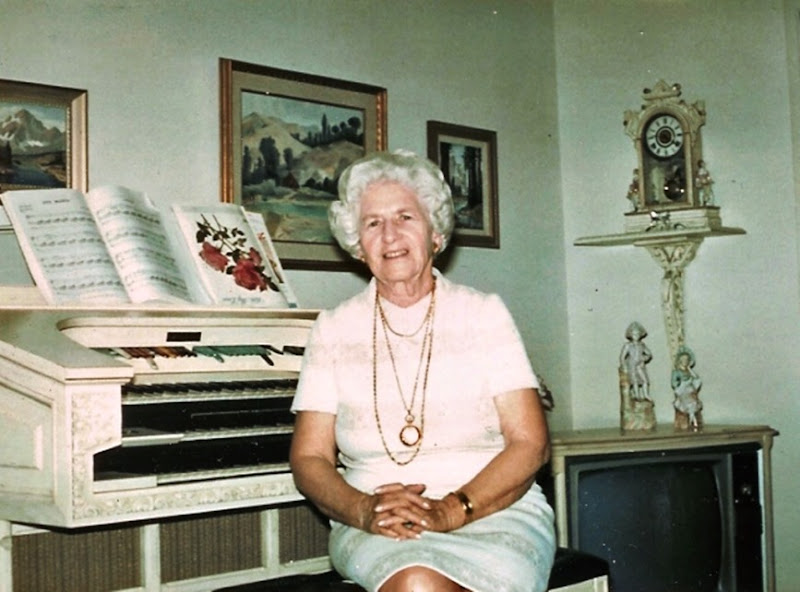 Thoughts that came to mind as I was writing this blog post.

What other stories will I find in my newspaper searches?  What interesting items have you found? I’d love to hear about them.