The first census record I locate Mary in, is the 1861 Scottish census at Drumduan Cottage, Aboyne, Aberdeenshire, Scotland.

(You may click on any image to enlarge it)

The next record I have for Mary is a passenger list.  She traveled to Quebec, Canada at the age of 17 with her young brother, Andrew, age 12.  They traveled on the ship St. David and arrived in Jun 1868.  I found no other Milne’s on this passenger record.  The record does not list (as some do) a relative they are going to visit or stay with.

Question:  Why were these two children sent over to Canada by themselves?

I have been unable to locate Mary in any census records for 1870 in the U.S. or in 1871 in Canada.  I did locate her brother, Andrew in an 1871 census in Lambton, Ontario, Canada, living with the Smith family.  Mary is not with him.

Mary married John Thornton on 19 Dec 1871 in Lambton, Ontario, Canada.  John was born 17 May 1851 in Lincolnshire, , England, to Samuel Thornton and Mary Staton. 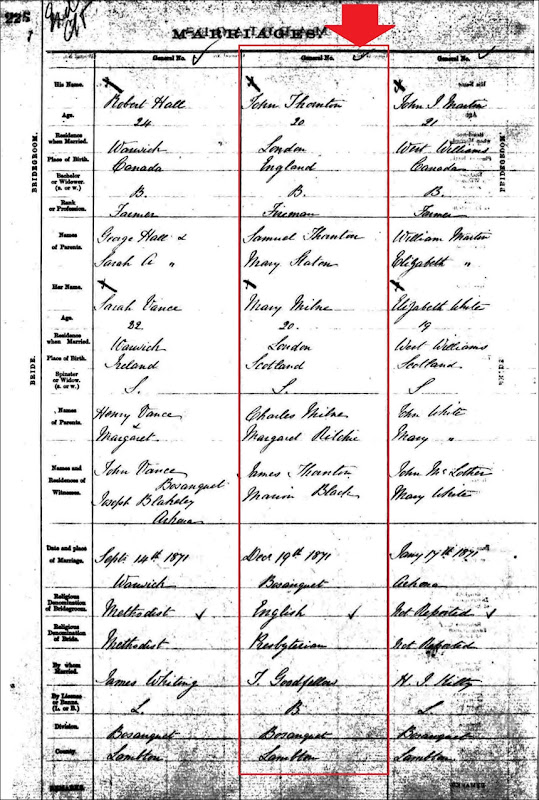 Mary and her husband John can be found in the 1881 London, Ontario, Canada census.  He is working as a Turner and they have 2 sons, Alfred 6 and John 2.

I was curious about the job description and located this information about a Turner at this website https://www.jobisjob.com/turner/job-description

Description
Turners are responsible for manufacturing metal components and assembling them to construct tools, industrial machinery, and machine components. They study assembly specifications to perform the most efficient order of processes required for specific projects. These specialists also measure each large and small component to ensure they will fit together properly in the final design. They identify potential problems by understanding machine specifications and drawings before the production process.
Turners usually perform many of the following tasks:
• Maintaining equipment.
• Taking accurate measurements.
• Teaming up with machinists.
• Assembling metal components.
• Polishing finished components.

I can only wonder how much that little girl was doted on by 4 brothers and her parents.

Based on birth records for the children, it appears that some time between Andrew’s birth in May 1883 and the U.S. census in Jun 1900, the family moved to Muskegon, Michigan.

Mary & John can be found in the 1900, 1910 and 1920 census records in Muskegon, Muskegon Co., Michigan.  John went to work as a Railroad Engineer and they owned their home at 37 Prospect St.  Using Google Maps I was unable to locate any current pictures of even the street Prospect on any map for Muskegon, Michigan. I was able to locate Hall St.

However, I did locate a newspaper article about John building the house in 1910 for a cost of $700.  Can you imagine building a home at that cost?


Both Mary & John became naturalized citizens of the United States in 1885, according to the census records.  I would love to find their naturalization records.

Mary was a Treasurer for the organization Companion of Foresters.  Although I’ve done several searches online, I can find nothing about this organization.  Her husband, John, was involved in the Canadian Order of Foresters.

Mary experienced several losses in her immediate family.
Mary died on 22 Aug 1929 in Muskegon, Michigan.  Her cause of death is listed as Arteriosclerosis, myocarditis, nephritis and terminal lung infection.

Here is her death certificate 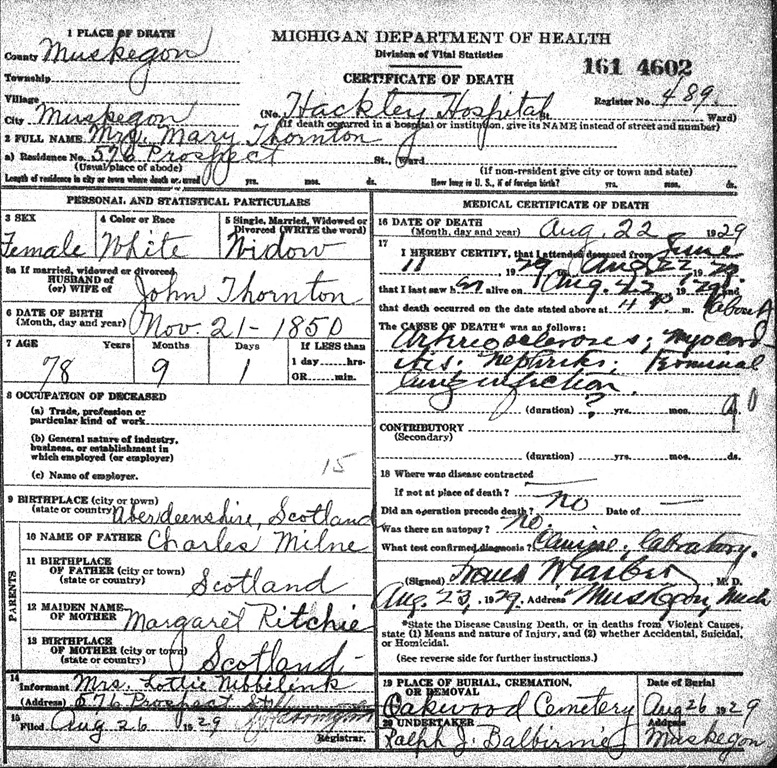 She and John are buried at Oakwood Cemetery in Muskegon, Michigan.  You may visit her memorial on FindAGrave.com #79385867.

From being born and growing up in Scotland, to moving to Canada, then to the United States, being the mother of 7 children, and being the Treasurer of an organization, it seems that Mary lived quite a full life. She has a nice smile in the newspaper photograph.  I wish I could locate other pictures of this family.

That being said, if you are related to this family in any way, I would love to hear from you.

OTHER POSTS THAT MAY BE OF INTERST TO YOU
Surname Saturday - Thornton of England, Canada & Michigan
Locating That Elusive Immigration Record - Margaret Ritchie Milne (1820-1902)