It doesn’t always happen right away.  I am talking about finding those records.  I’ve been dancing around this particular immigration record for a dozen years.

Margaret Ritchie Milne is my 2nd great grandmother.  She was born in Aboyne, Aberdeenshire, Scotland 23 Oct 1820.  She married Charles Milne, although I don’t yet have a marriage date for them.  They had four children, 3 daughters and a son.  It is the son, Andrew, from whom I descend.  Those three daughters were born first, so I’m glad they kept trying and finally had a son.

I knew Margaret had come to the United States after the death of her husband, Charles, who died in 1877. She is enumerated on the 1881 Scotland census.  But, I found her listed in a Detroit, Michigan city directory in 1886.  She is living with her son, Andrew C. Milne.

I also knew that she eventually moved back to Scotland, since she died and is buried there.

It’s often when we revisit the information we have for our ancestors, that things begin to line up and make sense.  Because we continue to learn as we research, we look at things from a different perspective.  That was the case with Margaret.

I looked at the Events I had listed for her in my Legacy database and realized that I was missing possible city directory listings.

I recently wrote a blog post about how helpful those city directories can be.  You can read that post here.

If Margaret was living in Detroit in 1886, could she have been there in 1885?  Time to check that city directory.  BINGO!
I was able to locate it and found her daughter, Charlotte, living with her, listed as "Lotta."  Also on that same page is Margaret’s son, Andrew C. Milne, my great grandfather. 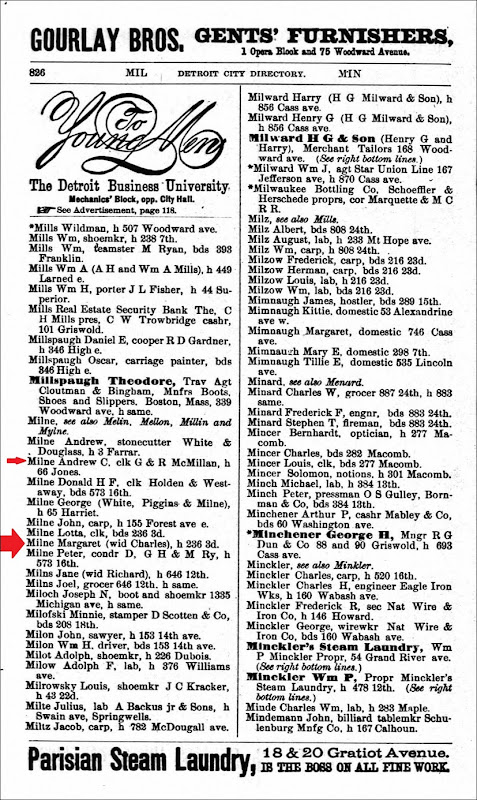 If Margaret was living in Scotland in the 1881 census, but was in Detroit, by 1885, then I’ve really narrowed down her arrival date.
Sure enough, I located a record on Ancestry.com for a Passenger list for Margaret Milne, traveling from Glasgow to the U.S. on 3 Nov 1882 on the ship Furnessia.  Who is on that passenger list with her?  Her 20 yr. old daughter, Charlotte.

This record is very difficult to read, but it was clear enough to me.  The ages for Margaret & Charlotte match exactly.

This was exactly what I’d been looking for these past dozen or so years.  I’m doing my happy dance right now.

Here is the indexed information from that record.

I’m very happy to have finally found this record.  What immigration records have you been searching for for a long time?  I’d love to hear about them.  Did you eventually find them?

WHY DIDN'T I SEE THAT?  When the obvious escapes us

STEVE MORSE'S ONE STEP WEBSITE ~ If you thought it was only for passenger records - Think again!