WORKDAY WEDNESDAY ~ Can I do a better job listing occupations in my database?

Here’s the question I asked my self today.  How many people in my Legacy database have occupations associated with their data?

Recording occupations should be one of the easiest things we do?  Right?

The question is…..do we record them?

Why is this important?  What can we gain from knowing an ancestors occupation?
These are just some of the reasons I believe it’s important to record the occupation of our ancestors.

I wanted to see how well I’ve done so I ran a report with Legacy 8 using the search feature.

I not only list occupations as I find them on various census & other records, but also have a separate entry for “occupation at time of death.”  I searched with both criteria.

Here is my search screen. 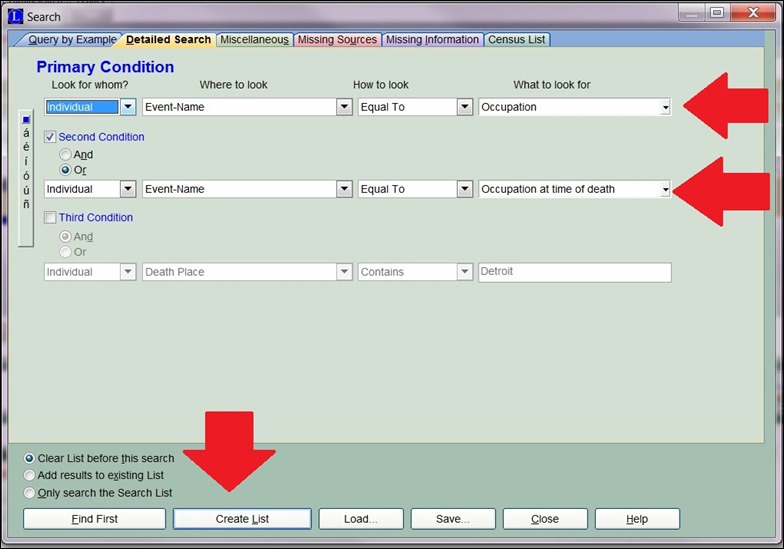 The resulting list told me that I have 187 individuals with occupation or occupation at time of death, associated with them.

- My Legacy 8 database contains 4869 individuals
- That means that I only have occupations recorded for about 2.6% of those individuals.
- Now let’s take a look at how many of the 4869 in my database are males.

Taking into account that until World War II, most women did not work outside the home.

Can I improve these numbers?  Absolutely!

Will doing so provide more information and leads in my research?  Yes.

Should I record every occupation from each census and other record separately?  I’m not certain on this one.  Perhaps only record another occupation if it is different from the one I have?

What discoveries have you made by following someone’s occupation?

Legacy 8 Search Function - What Can You Find?  I used "Occupation" as an example