DOLERI OR DOTEN? WHY IT IS SO IMPORTANT THAT WE VIEW ACTUAL RECORDS AND NOT JUST TRANSCRIPTS


This subject has always been near and dear to my heart as a genealogist.  It is important/imperative that we view the actual record for our ancestor and NOT just a transcription or index.

Early in my research, I sent for and received death records for my 3rd great grandparents, Henry Hart and Olive G. Hart.  I did not know what Olive’s maiden name was and had hopes that a death record could provide that for me.  In addition, I had no idea who her parents were.

I received both their death certificates in April 2005.  I was still pretty much of a rookie genealogist back then.  I was excited to have the certificates.

There they were – the names of Olive’s parents – Isaac DOLERI and Sally DOLERI (no maiden name for her).  Now I had names to search for in hopes of learning more about Olive.

Here is that certificate. 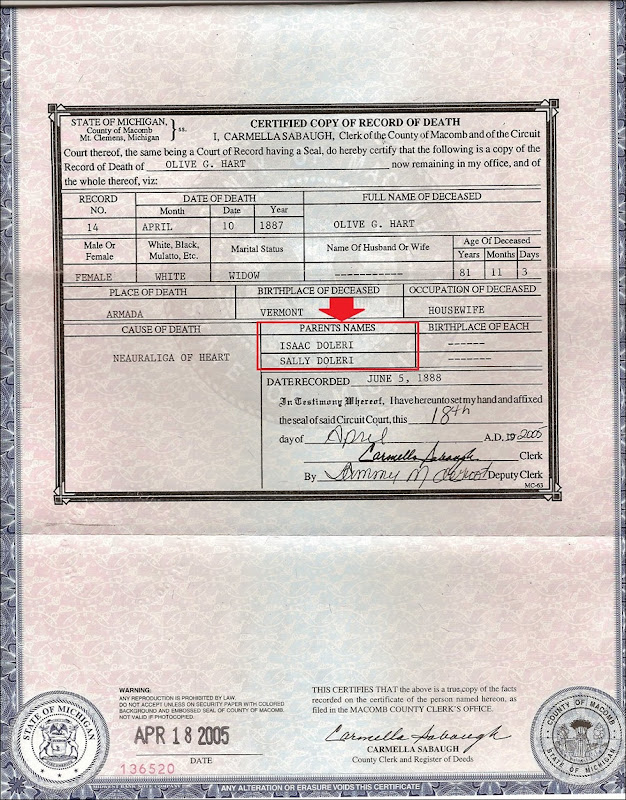 I began my search for the DOLERI family.  I searched and searched and searched.  I located not one single reference to a family with the surname DOLERI.  Not on any website I went to, from Ancestry to Family Search to NEHGS, FindAGrave and RootsWeb.  I set this search aside and went on to other family members.

However, I never forgot about it and have from 2009 forward recorded my efforts to find more information.  I made inquiries to people who had trees on Ancestry and to a researcher at the New England Historical Genealogical Society (I never heard back from NEHGS).  However, I did get responses from some of the Ancestry tree members.

The responses I was getting were leading me to believe that there was a transcription error on the death certificate in regards to Olive’s parents surname.  I now believed that her maiden name was probably DOTEN.

I contacted the County Clerk for the County of Macomb and asked if they would just send me a copy of the actual record, at my expense of course.  They declined.  I did make a note to order the microfilm containing the Michigan death records, however, I never ordered it.

Without going into too much more detail I will tell you that I located many records related to the DOTEN family in Vermont, where Olive was stated to have been born.  I was also given the middle names of all the children by a cousin, Judy, who contacted me.  She said that Olive & Henry’s first born son, Isaac’s middle name was DOTEN.  Which does make sense as far as naming patterns.

TODAY I was doing yet another quick search to see if I could locate the actual death record for Olive.  Maybe I would find it online. I never give up.  Don’t you know, there it was.  The actual ledger containing her death information.


And what do I see…..her parent’s names listed as Isaac and Sally DOTEN!

Here is the record. 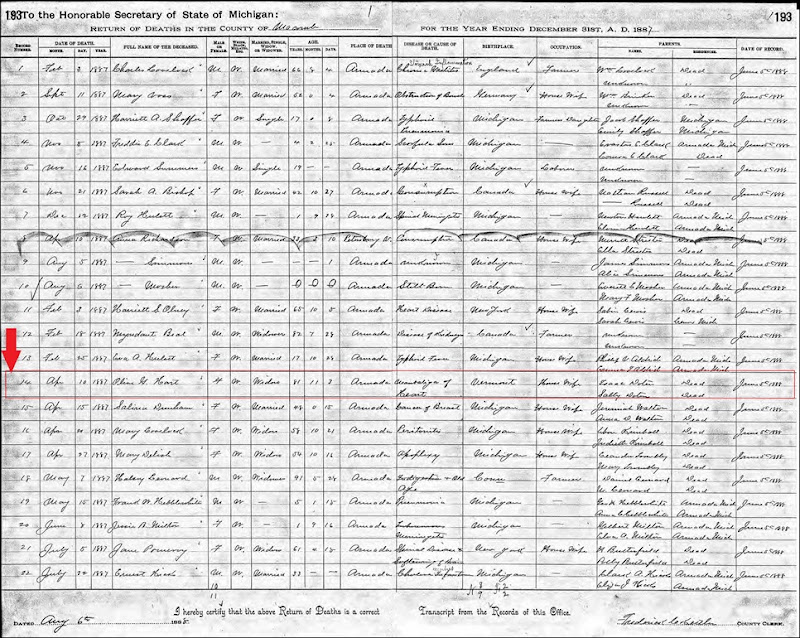 Here is the actual entry.

If you zoom into the parent’s name in the third column from the right, you will see the last name is written DOTEN.  There is an obvious cross of the “T” on both instances.  I do understand how things are misread by transcribers and indexers.  It happens.

I have a lot more research to do on Olive.  I have not yet located her in any Vermont records for her birth, nor any probate records for Isaac Doten, that might mention her.

So, keep looking for those records.  Don’t ever give up!