Here is what I have in my Legacy database for Emily Gillen.

I noticed when I looked at her Individual screen that I was missing an 1880 and a place of death for her. 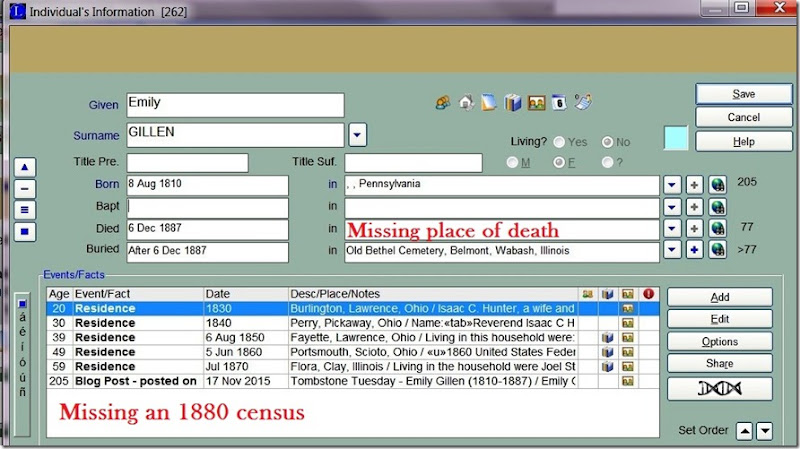 I went to my Ancestry.com tree and looked at the hints.  Nothing there gave me any leads.  I decided to look at some of her children, especially the two youngest ones, George and Emma Pope.

Sure enough on Emma Pope’s hints I found an 1880 census.  Why don’t I check that and see if her mother is living near by.  At this point I don’t even know if Emma’s father David Pope is still living, as I don’t have a death date for him.

HERE’S WHAT I FOUND

Note that there is an Emily Seed listed with this family.  She is listed as a mother-in-law, widowed, age 69.  If she is the mother-in-law, then her name is probably not Seed.  But, that doesn’t bother me because the age fits and the census is from the same city she is buried in.  Also, you’ll notice someone has added an edit for Emma Seed's name Emma Pope.  When I clicked on the name I see that the change was made by my cousin, Amy.  She must have already located this census and concluded that Emily Seed is actually our Emily Gillen and that Emma Seed is her daughter.

Here’s the actual image, although it’s difficult to read. 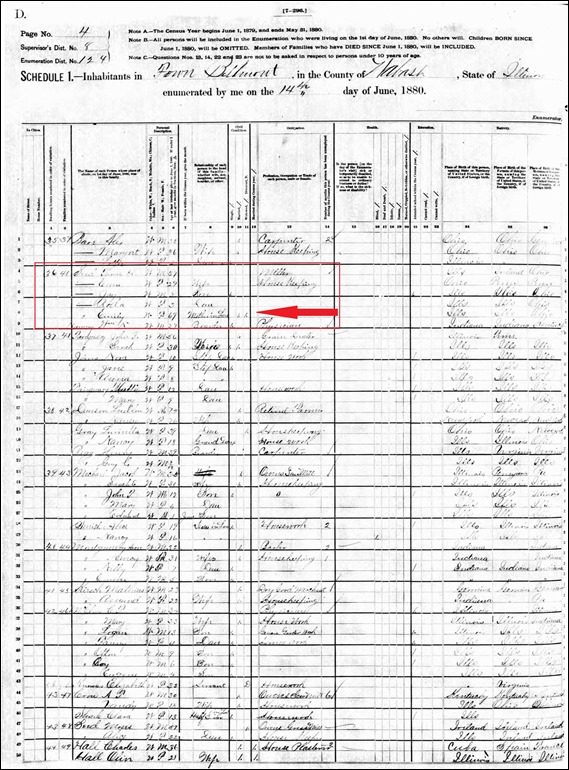 I do think this is our Emily Gillen living with her daughter, Emma Seed nee Pope, but I always need more proof than just my supposition.

Next, I went to familysearch.org and looked for a marriage record for Thomas Seed and Emma Pope.  BINGO!  They were married on 28 Mar 1871 in Illinois.

From the census I see that Thomas and Emma had a son named Jay or Joy and a daughter named Roda.

I located a death record for a Rhoda Seed Barclay in Pittsburgh, Pennsylvania on 28 Sep 1960.  The death certificate lists her parents as Thomas Seed and Emma Pope.  BINGO again!!

Here is that death record. 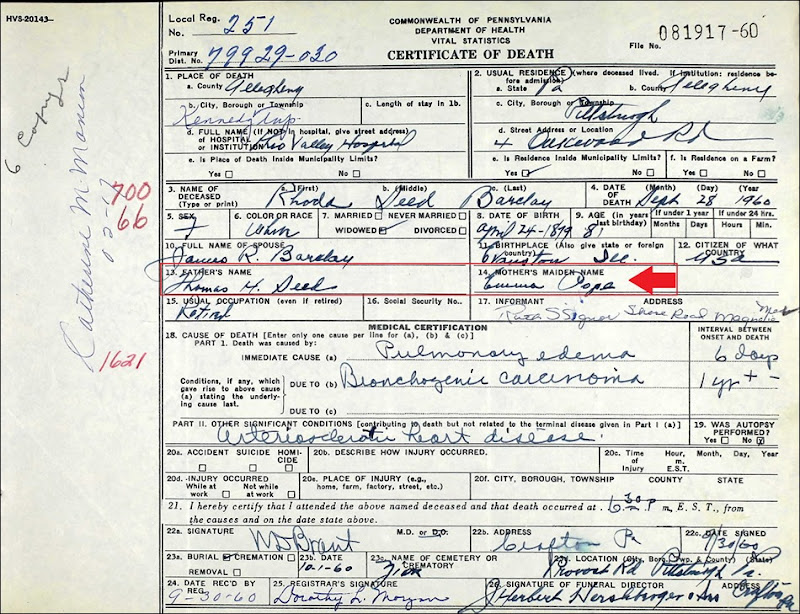 CONCLUSION: I feel comfortable that the 1880 census I located for Emily “SEED” is actually my 3rd great grandmother, Emily Gillen.

Our research is very much tied to the evidence we can find to support our theories.  I am never comfortable with just a “maybe this is her.”  I want more corroborating evidence and will usually hunt until I find it.

My next step will be to try and locate Emily’s death certificate.  I’ve checked on family search and have had no luck so far.

However, if she was listed as Emily Seed on the 1880 census record, who knows what name is on her death certificate.  I have work to do.

A GREAT DISCOVERY - Ask for Help and You May Get It