THE FORGOTTEN PLAGUE–KILLED MILLIONS OF PEOPLE FOR CENTURIES

WHAT WAS THIS PLAGUE?
It was Tuberculosis.  Also known for many years as consumption, phthisis, pulmonalis and the wasting disease.

There was a program that recently aired on PBS called “The Forgotten Plague.” You can go to this link http://video.pbs.org/video/2365409222/ and scroll down to watch this show online.  It also may be repeating on your local PBS station.

I watched this episode because I knew that we had family members who had died of this disease.  I knew for sure that my own maternal great grandfather, Andrew Charles Milne, died of it at age 36 and that my husband’s paternal great grandfather, Ellmer E. Bright, had died of it at age 30. Both men died in the late 1800’s.
There was no cure for this horrible disease until 1946 when the antibiotic streptomycin was discovered.  Until then people suffered for years and sometimes decades, or died quite quickly.
The Mayo Clinic gives this definition of Tuberculosis
“Tuberculosis (TB) is a potentially serious infectious disease that mainly affects your lungs. The bacteria that cause tuberculosis are spread from one person to another through tiny droplets released into the air via coughs and sneezes.
Once rare in developed countries, tuberculosis infections began increasing in 1985, partly because of the emergence of HIV, the virus that causes AIDS. HIV weakens a person's immune system so it can't fight the TB germs. In the United States, because of stronger control programs, tuberculosis began to decrease again in 1993, but remains a concern.
Many strains of tuberculosis resist the drugs most used to treat the disease. People with active tuberculosis must take several types of medications for many months to eradicate the infection and prevent development of antibiotic resistance.”

Another definition can be found on Wikipedia at this link:  http://en.wikipedia.org/wiki/Tuberculosis

There has been a recent resurgence of this disease throughout the world and some strains are becoming resistant to treatment.

I wondered how many people in our family, that I was aware of, had died of this disease?
I ran a report in Legacy 8 for “cause of death” equal to “tuberculosis” or “consumption” or “phthisis.”  I would have listed the cause of death based on whatever record I located, so I knew it could be any of those words.

The report produced 12 names from my database.  I’m certain many more of our family must have died of this disease, since it effected so many worldwide.

However, here is the list based on the information I currently have. Click on the image to enlarge it. 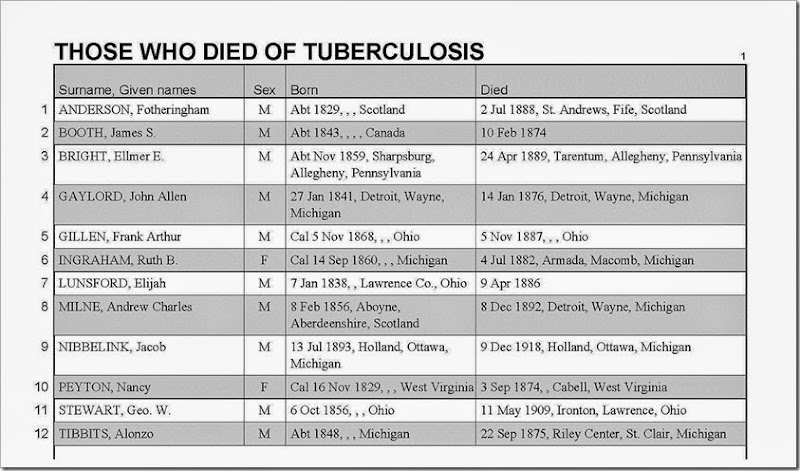 Who in your family died of this disease?


If you think you might be related, even remotely, to anyone mentioned in this blog, please contact me!
Michigan Girl

Email ThisBlogThis!Share to TwitterShare to FacebookShare to Pinterest
Labels: #plague, #tuberculosis, cause of death, disease